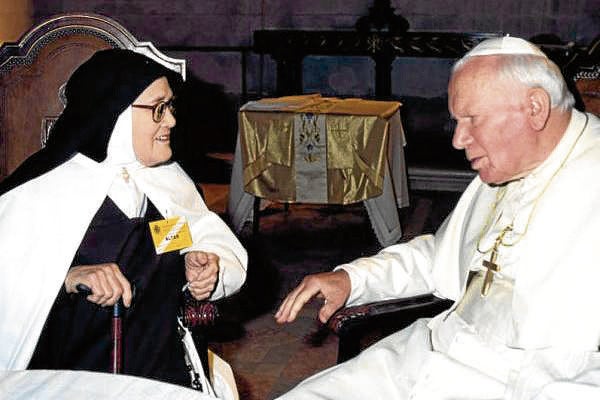 From Fatima to Lipa: What Marian apparitions say about China ‘invasion’

Cardinal Vidal interviewed in 1993 Fatima seer Sister Lucia, who said that the prophecy of Fatima ‘has just begun’

The Catholic Church marks on May 13 the 103rd anniversary of the Marian apparitions in Fatima, Portugal, amid a world gripped by the new coronavirus disease (COVID-19).

In the Philippines, Bishop Broderick Pabillo, apostolic administrator of the Archdiocese of Manila, will consecrate the archdiocese to Our Lady of Fatima during a noon Mass at Manila Cathedral on May 13. Starting May 10, there will be a triduum (three days) of Masses, penance and praying of the rosary, according to Pabillo’s “pastoral statement.”

“We do this to implore the protection of the powerful intercession of our Blessed Mother in this difficult time, especially as we move to the transition to a new way of life after the quarantine,” Pabillo said.

During the monthly apparitions to the three children-seers of Fatima from Feb. 13 to Mary 13, 1917, the Virgin Mary reportedly prophesied the Second World War, the spread of Communism, the persecution of the Church, and the assassination attempt on Pope John Paul II in 1981.

Interestingly, two of the seers, Francisco and Jacinta Marto, died during the 1918 influenza pandemic after the Great War. Francisco died in 1918 and Jacinta in 1920. Their deaths had been foretold by the Lady of Fatima, who reportedly said the children would become holocausts to atone for a sinful world, according to Lucia Santos, the third seer who became a Carmelite nun and carried the Fatima legacy up to her death in 2005.

The Marto siblings were beatified by Pope John Paul II in 2000 and canonized by Pope Francis in 2017, the 100th anniversary of the Fatima apparition.

The Fatima anniversary is especially meaningful because of renewed interest in the warning of the late Cebu Archbishop Ricardo Cardinal Vidal that the alleged Marian apparition in Lipa City in Batangas in 1948 prophesied Communist China’s “invasion” of the Philippines and the rest of the world.

In a 2014 letter to the Catholic Bishops’ Conference of the Philippines (CBCP), Cardinal Vidal said this was one of the “secrets” of the alleged Lipa apparition as revealed to Carmelite nun Teresita Castillo.

“Pray hard, for China’s dream is to invade the whole world,” Vidal quoted the notes of Castillo on the alleged apparition in 1948, a year before Communist triumph in China. “The Philippines is one of its (China’s) favorites. Money is the evil force that will lead the people of the world to destruction.”

Archbishop of Lipa before he became Cebu archbishop in 1982, Vidal wrote the letter in 2014, shortly after China took over the Bajo de Masinloc shoal in 2012 and made several incursions into the West Philippine Sea.

The warning has become timely today, after the Duterte administration has adopted a pro-China policy, has not protested Chinese military buildup in the West Philippine Sea, and has allowed the entry of Chinese overseas gaming operators and illegal workers.

The warning has also become relevant because COVID-19 is widely alleged to have come from Wuhan, which has two microlabs experimenting with new coronaviruses. (The Chinese foreign ministry has dismissed reports that COVID-19 could have come from the labs as “speculative.”)

Cardinal Vidal interviewed Sister Lucia Santos in 1993, where she was asked whether the collapse of the Soviet Union was a fulfillment of the Fatima prophecy. She indicated that while Communist Eastern Europe had collapsed, the “errors of Russia” had spread and the “Fatima (prophecy) has just begun.”

In 1917, the Lady of Fatima had warned of “war, famine and persecutions of the Church and the Holy Father … To prevent this, I shall come to ask for the consecration of Russia to my Immaculate Heart, and the Communion of reparation on the First Saturdays,” the Fatima apparition said, according to Sister Lucia. “If my requests are heeded, Russia will be converted, and there will be peace; if not, she will spread her errors throughout the world, causing wars and persecutions of the Church.”

Sister Lucia said that when they received the message in 1917, they didn’t know Russia. “We thought it was a wicked woman,” she added. At that time, too, the Bolshevik revolution that led to the communist takeover of Russia had not begun.

Perhaps because there was no full comprehension of what was meant by “Russia and her errors,” the full consecration was carried out only after the election of Krakow Archbishop Karol Wojtyla from Communist Poland as Pope John Paul II in 1978.

While meeting pilgrims at Saint Peter’s Square on May 13, 1981, Pope John Paul II was shot by Turk Mehmet Ali Ağca. He survived the assassination attempt that day, the 64th anniversary of the Fatima apparition. The Pope attributed his survival to Our Lady.

The attempt itself was said to have been predicted in the Fatima apparition. In her memoirs of Fatima, Sister Lucia said the Lady gave them a vision:
“And we saw in an immense light … a Bishop dressed in White … we had the impression that it was the Holy Father. Other bishops, priests, men and women religious going up a steep mountain, at the top of which there was a big cross of rough-hewn trunks as of a cork-tree with the bark; before reaching there the Holy Father passed through a big city half in ruins and half trembling with halting step, afflicted with pain and sorrow, he prayed for the souls of the corpses he met on his way; having reached the top of the mountain, on his knees at the foot of the big cross he was killed by a group of soldiers who fired bullets and arrows at him … ”

In 1984, Pope John Paul II led other bishops of the world in a collegial consecration of Russia in Rome.

In November 1991, the Berlin Wall fell, paving the way for the collapse of the Soviet Union and the end of the Cold War.

Asked by Cardinal Vidal in 1993 if the 1984 consecration was what the Fatima Lady had asked for, Sister Lucia replied yes. “The Holy Father has performed the Consecration and it is done.”

But she indicated that the errors or “mistakes” of Russia had already spread. She added that the “conversion” of Russia would not mean the eradication of evil. “The word conversion means a change; it does not mean that evil will disappear.”

Perhaps the most enigmatic part of the interview was when Sister Lucia spoke of the “Fatima week,” in which she indicated that the prophecy of Fatima was yet to unfold.

“People expect things to happen immediately within their own time frame,” she added. “But Fatima is still on its third day. The Triumph is an ongoing process.

In 1995, the Ramos administration announced the discovery of a primitive military structure on Mischief (Panganiban) Reef in the Spratlys, ordered the arrest of Chinese fishermen on Half Moon shoal, and filed a diplomatic protest with China against the incursions.

By 2018, two years into the Rodrigo Duterte administration, the Chinese had built a massive military facility.

Last April 2, Burmese Cardinal Charles Maung Bo, president of the Federation of Asia Bishops Conferences, said the “criminal negligence” of the Chinese Communist Party (CCP) caused the COVID-19 pandemic. “Through its inhumane and irresponsible handling of the coronavirus, the CCP has proven what many previously thought: that it is a threat to the world.”

Cardinal Bo said the CCP suppressed the news “instead of protecting the public and supporting doctors” and even “silenced the whistleblowers.”

Citizen journalists “disappeared” and China refused offers of help from other countries and turned down their requests to share its research on novel coronaviruses to find a cure for COVID-19.

Beijing later shifted the blame to the US Army for infecting the Chinese, he added.

“Lies and propaganda have put millions of lives around the world in danger … The CCP’s conduct is symptomatic of its increasingly repressive nature.”