Where did Jesus ascend to Heaven? | Inquirer Lifestyle ❮ ❯ 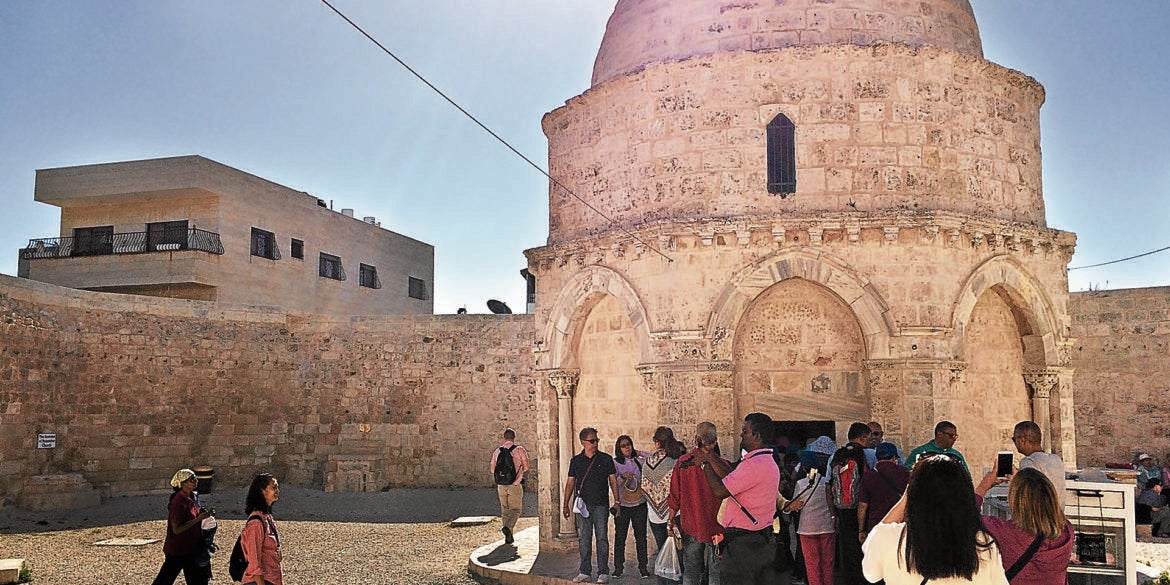 Chapel of the Ascension —PHOTOS BY LITO ZULUETA

Where did Jesus ascend to Heaven?

May 24 will be Ascension Sunday, and since the coronavirus in the Holy Land has resulted in the cancelation of all pilgrimages, expect the two sites associated with the Lord’s Ascension in Jerusalem to be bereft of pilgrims.

The two sites are the Chapel of the Ascension and the Church of the Pater Noster nearby, both on the Mount of Olives. Depending on who you’re talking to, the two sites either compete with or complement one aisnother.

They compete because while Ascension is in the administration of the Muslims, who call it the Dome or Mosque of the Ascension, the Pater Noster church is a Catholic church. Furthermore it stands on land claimed by the French republic. In fact the French flag is proudly flown on the site.

How the two sites may complement one another will be pointed out later.

Ascension is located on the Mount of Olives in an Arab-

majority neighborhood in East Jerusalem. The chapel or edicule was once part of a complex where it was the central feature. The complex underwent changes across the centuries especially after the final Muslim conquest in the 12th century.

Despite the changes wrought by religious and geopolitical vicissitudes, the edicule has more or less remained. In the 7th century, the Frankish monk-bishop Arculf described the complex as having a “central edicule containing the footprints of Christ, plainly and clearly impressed in the dust, inside a railing.”

When this writer visited the edicule in 2017, the footprints of the Ascending Christ were said to have been impressed on a slab of stone that pilgrims could touch.

Fr. Jerome Murphy-O’Connor, OP, in his best-selling “The Holy Land: An Oxford Archaeological Guide” (fifth edition, 2008) called the Church of the Ascension the “Mosque of the Ascension,” because it is under the authority of the Islamic Waqf of Jerusalem. One must remember that until the modern era, the Muslim Ottoman Turks ruled the Holy Land and either replaced old Christian sites with Muslim landmarks or kept the Christian sites while opening them for pilgrims.

The Ascension Rock or Hill, as the landmark is sometimes called since it is on a ridge, is part of the Status Quo, a more than quarter-of-a-millennium decree by the Ottoman empire and affirmed by the Treaty of Paris in 1857 which embodies the understanding among the religious communities—Jewish, Muslim, Latin Catholic, Eastern Orthodox, Armenian Christians, etc.—regarding nine shared religious sites in Jerusalem and Bethlehem.

It is because of this dispute and that it is under Islamic administration, which charges a modest fee from pilgrims, that some Christian groups, notably the Evangelicals, go to the other purported Ascension site—a grotto in the Church of the Pater Noster.

Very near the Ascension edicule, the Church of the Pater Noster is a Catholic church and so perhaps less repugnant to Evangelicals and other “Christians.” Moreover it is dedicated to the place where Christ purportedly taught the Apostles the Universal Prayer. It is thus a more ecumenical site to pilgrims of all Christian stripes.

Considered a French domain, the Pater Noster is run by French Carmelite sisters. It is a very pleasant-looking complex: one enters an atrium with a well-tended garden of palm trees and other tropical greenery. Around the garden under the sun happily glint a series of ceramic plaques on which are imprinted the Lord’s Prayer in different languages. The series extends to the corridors and chapels of the church and priory, so that pilgrims coming from all over the world will have a merry time looking for their respective languages.

Overall there are some 140 translations of the Our Father, truly the Universal Prayer.

Where is the Ascension spot in the Pater Noster church?

It is in the grotto or cave “of the Lord’s teaching” in the Pater Noster complex. By tradition, this was where the first Christians would gather in the face of Roman persecutions. They believed that this was “the certain place” in Luke’s gospel where Jesus prayed alone before instructing the apostles or going about his ministry. From this place the first Christians could spot the place where Christ ascended into Heaven.

When Constantine lifted the ban on Christianity in the early 4th century through his Edict of Milan, Christians started openly practicing their faith. Toward the late 4th century, the celebration of the Ascension had been moved to the nearby hillock, where the edicule is now. It became known as the “Imbomon” or “hillock.”

Meanwhile the cave had been integrated into the Church of Eleona (so named because of the olive groves), built by Constantine. The Church of the Pater Noster was built in the late 19th century on the ruins of the Byzantine church of Eleona. Legend also has it that Helena, the emperor’s mother, made a Holy Land pilgrimage in the early 4th century, and identified the two spots and upon return to Rome ordered the construction of two shrines on these sites.

Part of the confusion is that the New Testament appears to give contrasting accounts of Christ’s Ascension. In Luke (24:50-51), it is said that Christ “took them (the Apostles) out as far as the outskirts of Bethany, and lifting up his hands he blessed them . . . and he withdrew from them and was carried up to Heaven.” In the Acts of the Apostles, also ascribed to the writer of the Gospel of Luke, it is indicated that the Ascension took place in the Mount of Olives (1:12): “So from the Mount of Olives, as it is called, they (the Apostles) went back to Jerusalem a short distance away.”

In her account of her pilgrimage to the Holy Land in the 380’s, the earliest record of its kind, the nun Egeria seems to have referred to the transition of the Ascension spot from the cave at Eleona to the Imbomon. Describing Pentecost or the 50th day after Easter, she wrote of the early Christians:

“(I)mmediately after breakfast, they ascend to the Mount of Olives, that is, to Eleona . . . (At the) Eleona they first enter the Imbomon, that is, the place where the Lord ascended into heaven, and the bishops and priests take their seat there, and likewise all the people. Lessons are read there and hymns interspersed, antiphons, too, are said . . . The passage from the Gospel is also read where it speaks of the Lord’s Ascension, also that from the Acts of the Apostles which tells of the Lord’s Ascension into heaven after His Resurrection. And when this is over . . . they come down thence, it already being the ninth hour, and go with hymns to that church which is in Eleona, wherein is the cave where the Lord was wont to sit and teach His Apostles . . . ”

Egeria’s account is very striking. Take note that both sites were accorded homage. In the observance of Pentecost, too, the two accounts of the Ascension in Luke and the Acts of the Apostle were read one after the other without confusion.

Perhaps just as striking, too, in Egeria’s narrative is that the Ascension or the 40th day after Easter was celebrated not in Jerusalem or the Mount of Olives but in Bethlehem, in another cave—“the church wherein is the cave where the Lord was born.”

Do all of these sites complement one another in memorializing Christ’s Ascension?

Most probably. Bethlehem memorializes the Incarnation, of God-made-man. And in the Mount of Olives, where Christ taught the Apostles the Our Father, he declared the universal divine birthright of everyone. It was a birthright more than manifested when he ascended back to the Father on Ascension Day. INQ