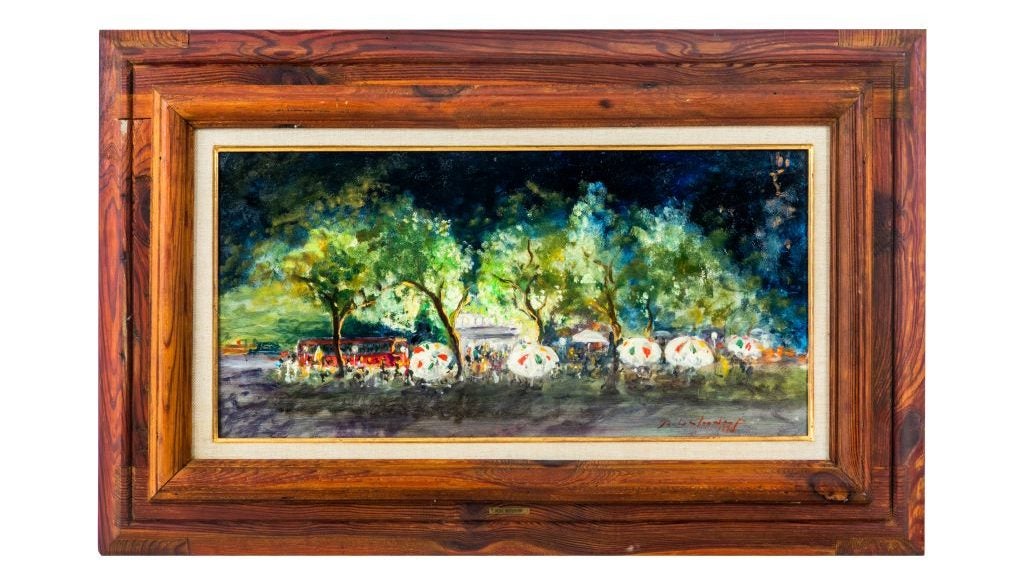 Segundo, the 20th auction for Lhuillier-managed Casa de Memoria presents close to 300 lots of fine European objets d’art and collectibles. The online auction completes two days of offerings from the weekend of May 30 to 31 using Invaluable as its platform. Proceeds from the online event will support the construction of the emergency quarantine facility (EQF) at Sta. Ana Hospital, Manila.

The auction house joins other local art and culture venues as it presents a veritable selection that entices the connoisseurs who remain home with the Enhanced Community Quarantine. The curatorial team has put on display items—from portraiture to furnishings and silver—thus, enhancing a well-lived home style. The Casa De Memoria salutes the frontliners in this two-day virtual auction.

Prolific painter Betsy Westendorp de Brias’ (b. 1927) “Summer Nights in Madrid” (Lot 024) finds its way to the Casa De Memoria auction book. The oil on canvas is reminiscent of her style. In an interview with Provenance Gallery owner Joanna Preysler for Metro Style, she notes “Betsy’s works are a soothing, healing balm—a much-needed treat for the soul and for the eyes especially in this time of chaos and disorder.  She’s very constant and dedicated to her art. …She was born to be a painter. And she knew it. And she worked on it and she got where she wanted to get.” Westendorp is a Lazo de Dama de la Orden de Isabel la Catolica awardee, bestowed by King Juan Carlos, and a Presidential Medal of Merit for Art and Culture grantee, given by former President Gloria M. Arroyo.

A unique offering that raises the Casa De Memoria diverse auction curation is a lithograph (Lot 009) by Spanish painter Pablo Picasso (1881-1973) of the historical poster of the exhibition “Sala Gaspar, Drawings by Picasso, April 1961,” with hand-made drawings by the artist. Signed in plate and dated 1961. In limited edition of 500 copies. It will be remembered that on Auction 17, another Picasso was made available and sold at PHP 280,000.00.