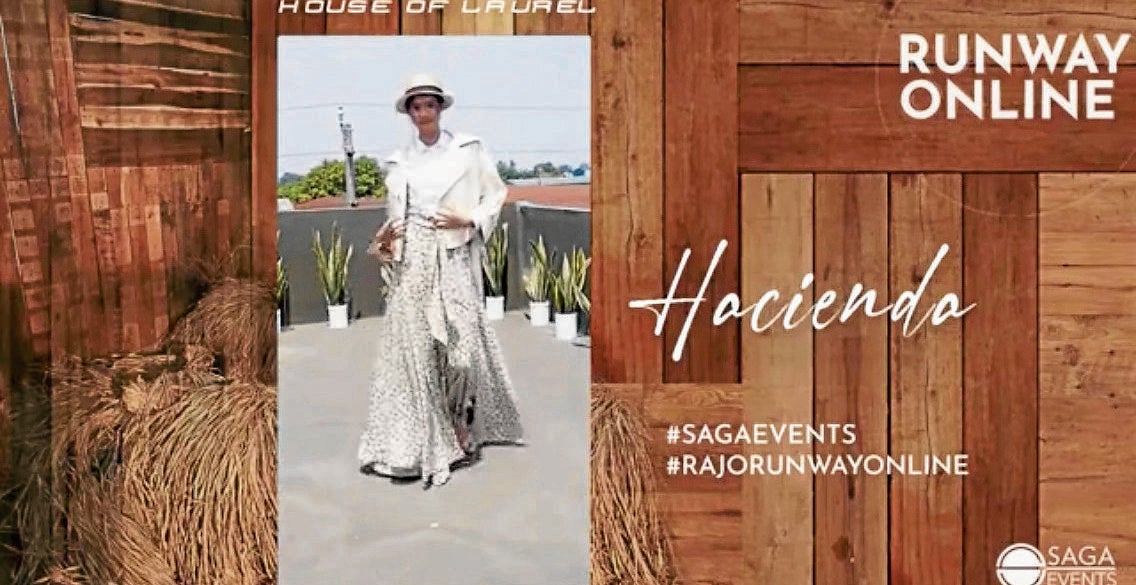 ‘This democratizes fashion . . . I can even share my comment live, and the big guys of the industry can read it,’ writes viewer

Like every other industry, local fashion ground to a halt in the lockdown. It only took an early morning call between show director Robby Carmona and fashion designer Rajo Laurel early this month, however, to get the ball rolling.

Instead of a regular fashion show, the two decided to stage an online fashion show, where Laurel would showcase 20 looks from a collection of 70 that he was supposed to present to clients in mid-March at House of Laurel, his Makati atelier.

“Robby called me asking what I had planned for my birthday,” Laurel said in a phone interview with Lifestyle. “I told him I didn’t have anything planned. That was when he suggested we hold an online fashion show.”

The result, Rajo Runway Online, can be viewed on Carmona’s Saga Events FB page—not the fake mirror account that sprouted on the day itself, asking people to create an account to be able to “enter” the show.

Unlike in the past when preparing for a show meant meeting with models, styling clothes on them, and deciding on hair and makeup, this time everything was done remotely. “The logistics were very different. We had to choose models who had access to sunlit area with plants in keeping with the Hacienda theme of Rajo’s collection,” Carmona told Lifestyle.

The disinfected outfits were delivered via courier to seven models (five females, two males) with a bottle of disinfectant they were instructed to spray on the clothes before wearing them. Aside from having access to a garden-like location, the models were chosen based on where they were quarantined (Manila-based only so the clothes could be quickly delivered), if they had strong internet signal so they could view the online hair and makeup tutorials created by Jing Monis and Gela Laurel-Stehmeier, and access to someone with steady hands who could wield a phone camera set to HD (high definition) 60.

“To give a cohesive look to the collection, the models could only be shot between 10 and 11:30 a.m. and 1:30 and 3:30 p.m. to avoid midday shadows and the yellow tones after 5 p.m.,” Laurel said. Their videos were shot on May 11 and May 12, then sent to Carmona for editing in time for the online fashion show on May 19, Laurel’s birthday.

Show must go on

The hourlong online show hosted by Issa Litton started with introductions to Laurel and Carmona, who talked about how the project came about. It also featured segments featuring Laurel’s muses like actresses Iza Calzado and Judy Ann Santos and singer Lea Salonga, and tutorial snippets from hairstylist Monis and makeup artist Laurel-Stehmeier.

Just before the show proper, over 1,800 viewers were logged on but then the screen froze, a technical glitch at the worst time possible. By the time we were able to log on again, the show had ended. It was eventually uploaded later that evening, where it has since been viewed over 16,000 times.

Many of the gushing online viewers were friends or clients of Laurel or Carmona, but the show also drew other people like Maricel Estavillo, who does government relations for an insurance company.

“For me, this is not about Rajo’s new collection but about a new platform and the possibility created for the industries of fashion and events,” Estavillo said. “Somehow this democratizes the fashion industry. I can watch without a formal invite. I can even share my comment live, and the big guys of the industry can read it.”

Estavillo was also unable to view the show as it aired live because of the glitch, watching only after it was posted. “This platform can be stressful to the creators, and they will be automatically reminded of their lapses and limitations,” she said.

Fashion is still something best experienced in real life, though. Nothing can compare to running one’s hands over textured fabric, airy cotton or silky fringe.

Carmona and Laurel realize this. “Still, even if the project was put together remotely, it managed to create significant human connections,” Carmona said. “Our business will evolve. This is how we start and this is how we start strong.”

“This was our goal: to begin again. After two months of zero work, we were able to jumpstart things,” Laurel said. He is certain that this platform or something similar will only improve because “the younger designers are more adept at technology and content creation. This is just one way for now.”

Still, he admits to feeling wistful for the “past”—everything that happened “B.C.” or “Before COVID.”

“Nothing can replace the energy of a live show. Fashion, by its very nature is tactile, multisensory. Watching an online show is like eating cake but without all of your senses engaged.”