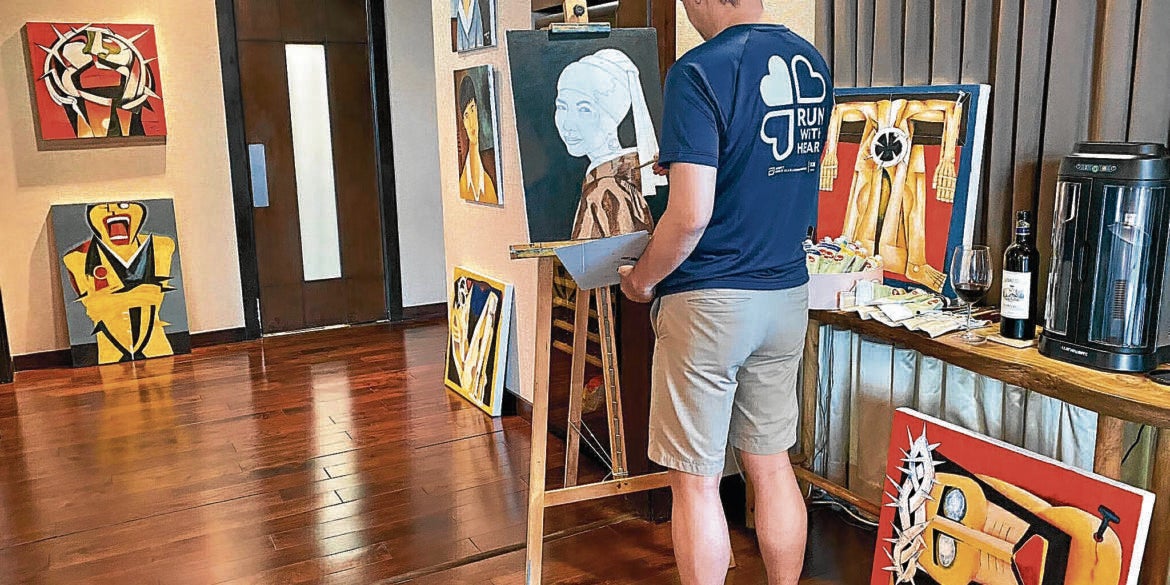 Emerson Yao at his easel: “I usually work on three to four pieces at the same time.”

It’s a passion the top retailer got from his father, who was mentored by Botong Francisco and was Ang Kiukok’s good friend

The never-ending quarantine has brought back leading retailer Emerson Yao to a childhood interest—painting.

But just as interesting, it rekindled the memory of his father and those early years when he would drive his dad, then already ailing with cancer, to the homes of his artist friends like Ang Kiukok and the sculptress Virginia Ty-Navarro. He didn’t know then that Kiukok would become a National Artist and Ty-Navarro’s name would be immortalized as the creator of the towering brass monument, Our Lady of Edsa, at the junction of Edsa and Ortigas.

Like a typical boy who was growing up around his father’s friends, he didn’t take special interest in them. He was only 10 years old then. It was only in this text interview, when we asked him about his father, the late Yao E. Chiu, and Kiukok, that it was reestablished that his father was part of the fine arts batch that was mentored by National Artist Carlos “Botong” Francisco at the University of Santo Tomas. Botong’s mentorship shaped the early art of Kiukok, Ty-Navarro and National Artist Jerry Elizalde-Navarro. We reminded Yao how, unknowingly, he grew up amid such distinguished company.

Our exchange, he said, was like “connecting the dots. How I wish I knew all his friends back then.”

Drawing and painting are what keep him going in this isolation—that, and running in his home’s parking building. He chalked up—believe this—200 km running daily from parking level 1 to level 7 in this lockdown.

“It’s quite fun, as I’m out of the sun. The elevation makes it windy and it is good training for the hills.”

Now that is an indomitable spirit that should inspire all locked-down adults.

He paints regularly now to hang some of his works on the walls of his home. He likes just to keep them in his home, not really for people to see. He draws or paints whatever, he says, “sparks joy.”

Mirroring what father did

“My love for art (drawing and painting) started when I was a kid, and frequently mirroring what my father did, who was a classmate and good friend of the master Ang KiuKok,” he told us to explain why, for starters, he loved copying the works of KiuKok.

“I stopped painting until eight years ago when my daughter was preparing her art portfolio for college application. Naturally, that rekindled my passion. As expected, my work had again taken over my hobby, and I found the time to do art again only during the lockdown.”

Yao is managing director of Lucerne, the leading retailer of Swiss luxury watches in the country, a business he and his low-key brother Ivan took over upon their father’s death in 1988. Yao Chiu, the artist by training who would become a businessman, founded Lucerne the watch store in 1982 at Ali Mall, Cubao. The watch store grew, and in the ’90s the Yao siblings opened in Makati, and in recent years, in Bonifacio Global City.

The expansion of Lucerne is one of the success stories of the past decades. It now has more than 70 brands, from ultra luxury watch brands such as Patek Philippe, Vacheron Constantin, Audemars Piguet, Rolex, Omega, Longines, Breitling, IWC Schauffhausen, Panerai, Jaeger-LeCoultre, Chopard, to midrange and entry-level watches such as Philip Stein.

The Group now has popular non-watch brands such as Pandora.Then all business—indeed all lifestyle—came to a halt in this pandemic. Yao seized the chance for a breather. “I restarted (painting) as soon as I heard of the lockdown, and quickly dug up all our easels, brushes and paints. I also hurriedly bought canvases.”

Initially, Yao was reluctant to discuss his paintings with us because he said his works are, in fact, adopted from the works of his favorite artist Kiukok. We had to assure him that even if he’s not passing it off as original concept, it is still painting as lockdown therapy—a form of self-expression, even self-healing so crucial in these times.

“During lockdown, I’ve had more time to focus on the techniques,” he says. “I like Kiukok’s works and focused on them initially. Now I’m trying to learn Modigliani and other artists. I’d like to do portraits too some day.”

He did his daughter’s face in the Modigliani style.

He uses acrylic because it dries fast—“and when you make a mistake you can just paint over it,” he says.

Kiukok is his favorite among the masters. He also likes Elmer Borlongan and Andres Barrioquintos, Rodel Tapaya.

He describes what painting is to him now. “It’s relaxing and very fulfilling. Seeing beautiful reproductions come to life gives me a lot of satisfaction, also a great way to pass the time.”

For a hobbyist, he is prolific: “I usually work on three to four pieces at the same time. That way you can do many different aspects—drawing, foundation preparation, detailing. There will be a time when colors and techniques are not coming out right, so I can switch to another before going back to it. I would say if I add up the time for each 2×2 work, it should take me two days or 24 hours.”

However, he prefers to be like his father who took up painting privately, never sold his art nor had any exhibit. He recalls, “At one point after graduation, he and Kiukok partnered to open a gallery in Chinatown to paint portraits or people. That failed, as expected.”

While his early art gallery failed, the father gave his then 10-year-old son a valuable memory and skill. “We would sketch together and do watercolor. I didn’t touch his oils back then.”His dad died young, in 1988, almost two decades before Kiukok himself passed away in 2005.

While painting has become Yao’s lockdown self-expression, in recent years, it was his running that got media and friends to sit up and marvel. He has finished all five major marathons—Tokyo, Berlin, London, Chicago and New York. He was about to do Boston, which was cancelled because of the pandemic.

“I’ll continue my love of running as I haven’t felt so healthy and light as now, not even when I was doing other sports. Long-distance running is really a great way to lose weight and stay healthy.”

He runs eight to 10 km every morning—“then breakfast, and checking the local and international news. Then I start painting around 10 a.m., and we would watch movies with the family or play mah-jong.”

Like many others, he says of the pandemic, “I wake up each day hoping this is just all a bad dream, but it isn’t.”

While his group is preparing for the reopening of stores, he says, “It will not be the same anymore. We will need to adjust to this new life. We’re opening our e-store to sell online.”

Then our chat turns light, thankfully—“Maybe I’ll get my hairdresser to style my hair like a K-pop artist. They keep saying my hair needed more length before they could style it. Well, now it’s long enough.”

Now, this businessman who’s become a master of self-reinvention has the K-pop look on his horizon. You never can tell, really, the surprises of this pandemic.