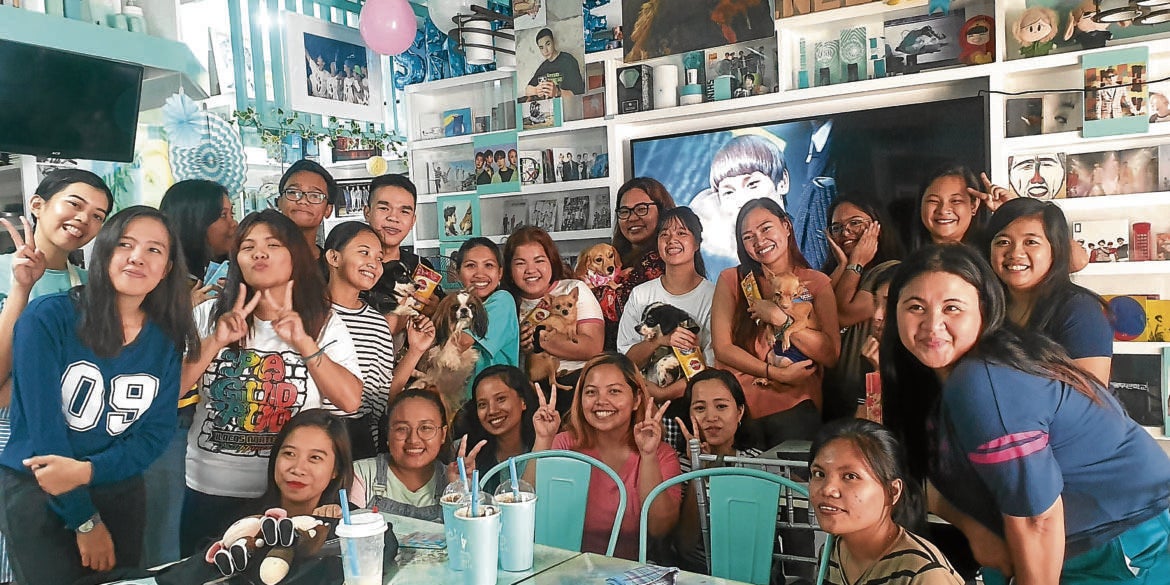 One of the many gatherings held at Sincerely, Shawols Café

SHINee’s Onew, Minho and Key are in their last few months of military service. Their youngest member, Taemin, is temporarily with SuperM. So what do Shawols (fandom name) do in the meantime?

Camille Pasao built the ultimate shrine for SHINee when she established Sincerely, Shawols Café (SSC) in Imus, Cavite, last year. She envisioned her café as a home for local Shawols.

Pasao worked hard to make it so. She’s hosted nine events at the café, each one with more than 50 attendees. That’s a feat given that the café is located in Cavite. It means fans make an effort to travel to the place to spend time with fellow fans.

“There are also some international fans from Taiwan, Japan, Korea, USA, United Kingdom and Singapore who visited the café,” she said. “I was shocked to find out that they added the café to their itineraries. I am thankful for the support.”

This is why the café transferred to a bigger location early this year to accommodate more people. It is now located at 2/F GPDL Bldg., B10 L5 Parkplace Strip, Anabu 1-D, Imus, Cavite.

Pasao has always been a busy fan. On her Twitter account @moonrapbbit, she shared her artwork celebrating Onew, Jonghyun, Minho, Key and Taemin. Her first merch was a collaboration with @Onkishop. She also started designing commissioned art for tattoo designs and shirts.

A personal project that she’s proud of was designing six pins for SHINee’s 10th anniversary. She was surprised when she received orders from different parts of the world.

One of her projects include taking part in the Jonghyun zine with other artists. Some of the proceeds were donated to the nonprofit organization Suicide Awareness Voices of Education. Jonghyun passed away three years ago.

Her project this year is designing SHINee plush dolls. Each doll is worth P1,600 and comes with two sets of clothes. Plush dolls are often limited and they sell out fast.

She was planning on hosting a cup sleeve event for the group’s 12th anniversary before the enhanced community quarantine. The event has been canceled. To countdown to the group’s debut anniversary, SSC started the 10-day challenge. Every day, fans can share their memories with SHINee. This includes sharing photos of the pearl aqua items that they own and their favorite workout song.

Veronica Jose has been a fan since SHINee debuted 12 years ago. She quickly gained online fame as a trustworthy seller of SHINee merchandise.

“I started liking them because of their music. Back in 2008, their sound was different from the other K-pop boy groups, and it was totally my style,” she said.

Her Twitter account @veekimoo started two years ago and it was almost an accident. She was looking for other people who would like to order with her.

“Jonghyun was so active back then. I couldn’t find any group orders (GO) for his ‘Blue Night Third Anniversary Compilation’ album,” she said. She couldn’t find anyone selling the album so she took matters into her own hands and created her own group.

While she sells SHINee merch, she does not describe her account as an online shop. Instead, she calls herself a hoarder who sells extras from her GOs. Her account is mainly for GOs, but they’re used often for fan projects as well.

She created the Letters for Jjong project. Fans sent Kim Jong-hyun letters on his last Blue Night DJ gig. Sometimes, she’d give away albums of the group to make fans continue supporting SHINee.

Early this year, they held the Shiny auction in support of the Shiny Foundation. It’s a nongovernment organization established by Jonghyun’s family after his death to support musicians having a difficult time.

Jose collaborates with fellow fans, too. She, Pasao and Seasons of Jjong (@seasonsofJjong) once sold Jong-hyun-inspired merchandise to raise funds for donations.

So what keeps SHINee shining for the past 12 years? It’s because fans like Pasao, Jose and other PH Shawols are staying true to them.

Super K is hosting an online party for SHINee. Do check out Super K on Facebook for details.