‘On days when work is hard, I have to remember to be grateful’ | Lifestyle.INQ ❮ ❯ 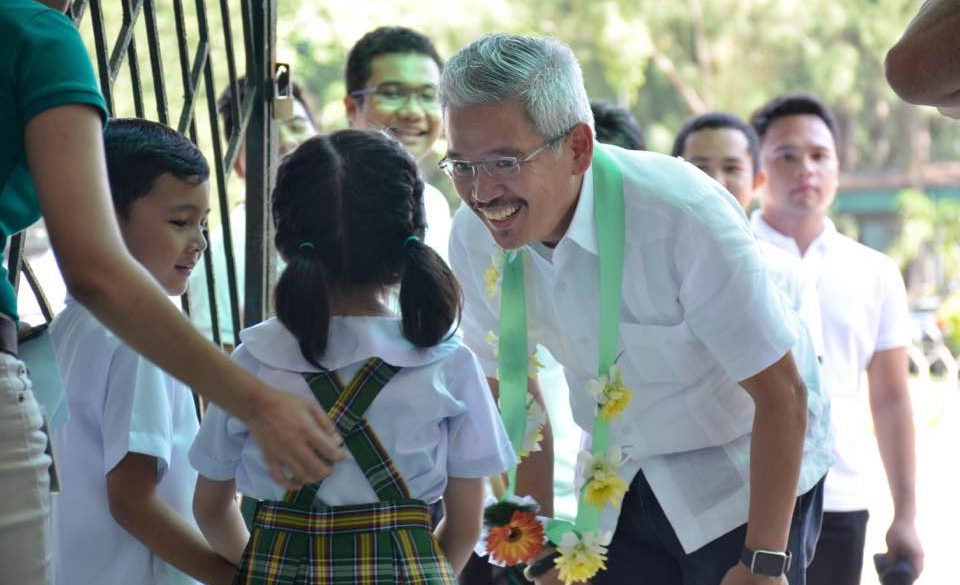 Bro. Dodo Fernandez at De La Salle Lipa: “We mold our students holistically, including giving them a sense of social justice.”

‘On days when work is hard, I have to remember to be grateful’

La Salle Green Hills president hopes the school can ‘adapt and innovate, and not just survive this crisis’

In the case of Edmundo “Dodo” Fernandez of the Institute of the Brothers of the Christian Schools, the religious order that runs all La Salle schools worldwide, spending time alone gave him the spiritual and physical strength he badly needs today.

On May 6, he posted on Facebook his photos from a 2019 pilgrimage to Santiago de Compostela in Northern Spain, where he learned that “no task is big enough and things can be done bit by bit, day by day. The kindness and love I received on this pilgrimage and the overwhelming sense of gratitude, I carry today, as I try to shepherd two schools out of this pandemic.”

During the pilgrimage, he walked for 39 days, passing through medieval towns, churches, farmlands and mountain views, and staying in simple lodgings.

“I wanted a reboot after I stepped down as Superior of the Brothers for 18 years, but I didn’t want just any seminar or workshop,” he told Lifestyle via email. “The pilgrimage was the perfect sabbatical for me as it combined what I loved most—running and walking, and the time to be by myself. I am generally an introvert and I get energy being by myself. So it was perfect. Plus, I loved the idea that I would be in a place where no one knew me and I wasn’t ‘on.’ It was the most profoundly moving experience of my life.”

Before joining the Christian Brothers in 1989, he earned a Bachelor in Fine Arts, Major in Painting, at the University of the Philippines (UP) Diliman. His grade school was at De La Salle University (DLSU) Manila and high school at LSGH.

“I come from a family with seven boys, and we all went to La Salle. My father was a professor at De La Salle College in the 1960s. Three of my older siblings had already gone to DLSU, so it was a bit of a departure… I was waitlisted at DLSU but decided to try my luck at UP Fine Arts, hoping to shift to architecture at a later time,” he recalled.

He found the freedom and independence at UP exhilarating: “It was the perfect counterpoint to a strict Catholic elementary and high school education. UP taught me about inclusivity and justice.”

What life had to offer

As a young visual artist, he did exhibits, including one-man shows.

“In trying to discover ‘what life had to offer,’ and doing other things, I realized none was working,” he said. “I suppose one could say I was looking for something deeper. It was my younger sibling who first joined the aspirancy program (the discernment period before becoming a De La Salle Brother), but I ended up pursuing it to the end.”

He has been a Christian Brother for the past 30 years, following in the footsteps of the congregation’s founder, Jean-Baptiste de La Salle, who established the first Catholic schools in France and was proclaimed patron saint of teachers by Pope Pius XII in 1950.

Fernandez first served as teacher at De La Salle Lipa in Batangas before assuming administrative and spiritual development duties at LSGH, and eventually heading the La Salle Brothers in the Philippines, as well as in East Asia, which includes overseeing schools in Hong Kong, Japan, Malaysia, Myanmar, Singapore and Thailand.

On what makes a La Sallian education different from other schools, he said: “We try to inculcate FSC to our students: Faith, Service and Communion. We mold our students holistically, including giving them a sense of social justice.”

As for the challenges of being LSGH president, he replied: “Oh, many. It is trying to keep a level of excellence that has been built through the years, thinking of how to bring the school to a next level, to become better than it was before. It is forming our students to be true Christian gentlemen. It is making our teachers the best mentors and examples they can ever be.

“On days when work is hard, I have to intentionally remember to be grateful.”

As LSGH gets back on its feet in this pandemic and the school’s integration that includes a trimester system and going coeducational in senior high—read Lifestyle on May 30, 2020—Fernandez said he hopes the school can “adapt and innovate and not just survive this crisis, but emerge a better school, a school that responds to the needs of the young men (and women) of today.”