Ambeth Ocampo: History does not repeat itself, it is we who repeat it | Inquirer Lifestyle ❮ ❯ 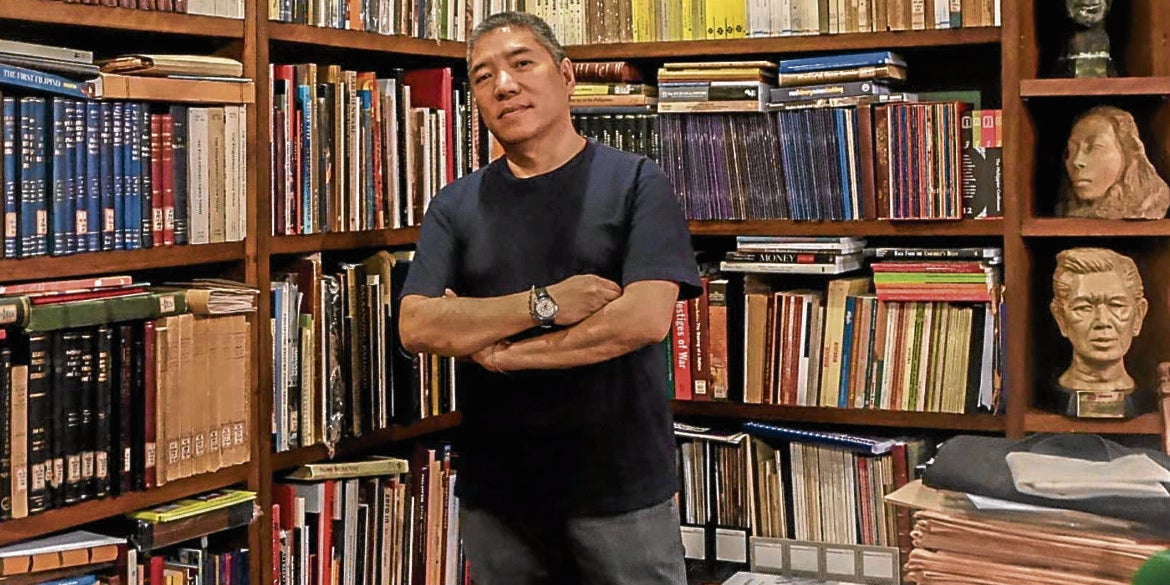 Ambeth Ocampo in his library

Bestselling historian gives his take on ABS-CBN shutdown, retirement and what he’s doing during the lockdown

History shows how human beings, helpless against an epidemic, adapt in time and survive,” wrote Ambeth R. Ocampo in his March 25 Inquirer column, just as the enhanced community quarantine (ECQ) was sinking its fangs into the neck of Metro Manila.

But Ocampo was writing not about the new coronavirus disease (COVID-19), but about cholera, which had burned through the Filipino population at the end of the 19th century and the very start of the 20th century despite quarantines enforced by the Spanish and Americans that ultimately failed.

Ocampo, 59, is the Philippines’ most popular historian and one of its best-selling authors. The 14th volume of his “Looking Back” series, “Dirty Ice Cream,” was released by Anvil Publishing Inc. in 2019.

As a former chair of the National Historical Institute and associate professor of history at the Ateneo de Manila University, Ocampo is uniquely qualified to reflect on how Filipinos have survived plagues in the past. “History gives us perspective to count our blessings,” he wrote.

Lifestyle asked him through email about his lockdown experience and his thoughts on recent events. Here is the historian at home. Excerpts:

What books are you reading or what content are you consuming right now?

During ECQ, as I prepared for online teaching in July and August, I reread Barbara Tuchman, highly recommended by Teodoro Agoncillo for the sheer delight in her prose. I started with “A Distant Mirror: The Calamitous 14th Century” (1978). Her riveting chapter on the Black Plague put my experience of COVID-19 in context and made me grateful for life in the 21st century.

Then there were the gripping opening chapters in “The Zimmerman Telegram” (1958) and “Guns of August” (1962) that Agoncillo praised as the way history should be written. I ended my review with Tuchman’s 10th book “March of Folly: From Troy to Vietnam” (1984), whose two themes seem relevant to our times: first, the “persistence of error” and second, “the pursuit by governments of policies contrary to their own interests,” often against contemporary warnings. It is a rather depressing look at the past that may make a new generation move forward.

What are you doing to get through these quarantine days?

Solitude is second nature to historians, writers and ex-monks like myself. Two months on, my only issue with quarantine has been a matter of choice: when to retreat into solitude and when to step out into sunlight in the world. As I eagerly look forward to the benefits of a senior citizen card, quarantine was a welcome foretaste of retirement when the planner goes blank, as it has for the past two months, making desk and pocket planners some of the wasted investments of 2020.

Contrary to popular belief, retirement does not mean permanently loafing or spending my days watching free movies in the cinema across the street from my place. Retirement is being able to choose what one wants to do.

Suddenly, with no classes to teach, no meetings to attend, no museums to visit, no archives and libraries to dig into, no long, chatty dinners to attend; the only things that have been constant in quarantine have been meals and the time dedicated to meeting my Inquirer column deadlines on Tuesdays and Thursdays. One does not need a blue moon or the right mood to write; for journalists, the only inspiration is the deadline.

Quarantine is like pressing the reset button on my laptop that wipes out much of what I was working on, with the assurance that it can be retrieved on Mac Time Machine. Unfortunately, the clean slate led to a reset of my body clock. I would stay up all night, go to bed at 6 or 7 a.m., wake up for lunch at 2 p.m. (Spanish time), take a long siesta and wake up in time for dinner at 8.

What did I do all night? I surfed the internet and downloaded materials from: the Biblioteca Nacional de España in Madrid, the Archivo General de Indias in Sevilla, or the website of the Historian of the US State Department in Washington, DC, I could do this because even before quarantine, I would set aside nights to binge on Netflix without guilt and consume an entire series of “The Crown,” “Designated Survivor” (the US version, not the Korean), “Money Heist,” “House of Flowers,” “Fake or Fortune.”

Netflix was also a way to brush up on my rusty French and Spanish. Watching films in their original versions with closed caption subtitles in those languages insured that words and phrases my ears couldn’t catch, my eyes would.

One of the welcome effects of quarantine was that I was able to reorganize my library. I pulled out many duplicates, titles I think I may not read or need in the next decade, and rare volumes that I have on PDF and stored in a precious external drive. I created more shelf space by stacking two rows of books per shelf with some system to help me remember what was hidden from view in the back.

Note to self: If I move houses in the future, I should have custom-built shelves deep enough to contain two rows of books. The shelves have to be slightly higher than normal and lighted from within so that the back row books, raised about five inches from those in the front, will enable me to see the spines. After the books came the files that no one else can organize. This brought to light many things I have been looking for, and sometimes surprised me to discover things I forgot I had.

What are you working on now? What is next for you, such as books or projects that we can anticipate when the ECQ ends?

Quarantine also provided an opportunity to begin a slide show to be played during my wake. I explain to shocked people who find this morbid that a funeral slide show cannot be left to my nieces who may choose unflattering or wacky pictures. This will insure that I will be remembered at my best. I think this exercise extends life because the Grim Reaper always skips those primed to meet him and picks the unprepared.

Quarantine provided me time to resume work on books. I have so far compiled essays for volumes 15 and 16 of my “Looking Back” series. I just have to match text with appropriate illustrations. I resumed work on my “Bibliografia Rizalina,” a calendar of all extant Rizal material known to me, about 95 percent of which I have physically seen and handled in the National Library, the Lopez Museum and other private and public collections.

I have also resumed the annotations on the handwritten diaries of Ferdinand Marcos that I have been promising to publish the last two years. There were some things in his entries for 1970 that provide déjà vu.

First, he was supposed to greet people remotely via satellite TV, at the opening of the Philippine Pavilion at Expo 70 in Osaka. He was playing golf when he was told he was on, so he hurriedly rushed back to the Palace from Pangarap on the other side of the Pasig River, put on a crisp barong Tagalog but kept his red golf pants on because they would only shoot half of his body. This reminded me of people in Zoom meetings who wear a suit on top but keep their boxers or panties on below.

With the shutdown of ABS-CBN, there have been references by netizens to the shutdown in 1972, about how this is a repetition of history and this is already a prelude to martial law. As a historian, what can you say about that comparison?

I always remind people that history does not repeat itself, it is we who repeat it. And when it does seem to repeat, it does so in slightly different ways. So it is no secret that the closure of ABS-CBN by this administration stems from fully paid political ads placed by then candidate Duterte that were not aired by ABS-CBN. Well, Duterte seems to be playing the Marcos playbook, too, by railing against “oligarchs” the same term Marcos used.

But in the 1969 election, Marcos took on Fernando Lopez as his vice president hoping that the Lopezes would contribute to the campaign kitty and was sorely disappointed when they only put in P200,000. Worse, Marcos counted on the Lopez media to push their candidacy. But business being business, all spots had to be paid for before airing.

Marcos noted in his diary that at one particular miting de avance, ABS-CBN refused to cover the event unless it was fully paid. No credit. No concessions. So, when martial law was declared in 1972 one of the first media outfits to be padlocked and later reopened under Marcos management was ABS-CBN. INQ