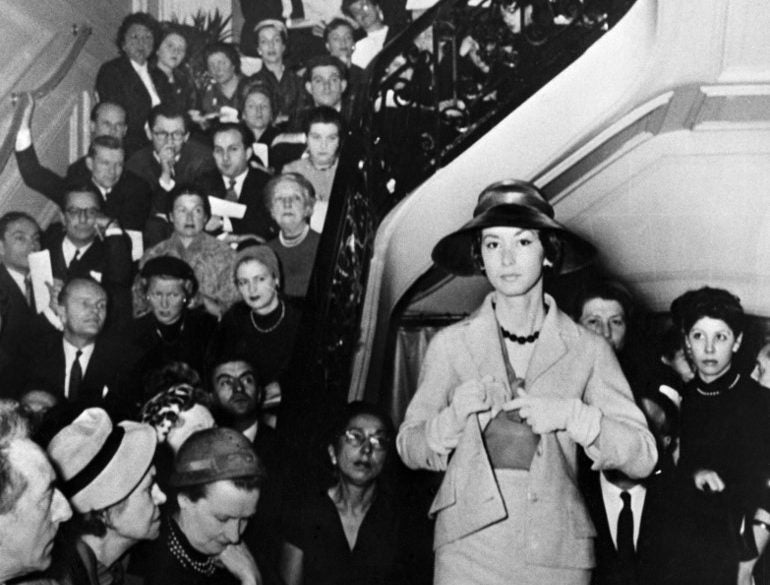 Picture taken in 1956 of a Christian Dior fashion show, in the Maison Dior in Paris. (Photo by - / AFP)

Over the weekend it was reported that the couture shows in July will be exclusively online, skipping the live runway shows. According to the Fédération de la Haute Couture et de la Mode, the French governing body that decides who gets to officially do couture, each house will present a “creative film/video” in an online fashion week from July 6 to 8. Maisons like Gaultier and Balenciaga have already opted out of the schedule.

With couture budgets being pivoted from the massive extravaganza of sets and PR and catering, to free-for-all digital presentations, the possibilities are endless. Indeed one of the best things about consuming couture, at least not as a client per se, are the little things we encounter on the fringes of the main spectacle, such as the savoire-faire Youtube videos that Chanel has been doing since Karl, about the making of both the maison’s couture and metier d’arts shows. Dior has been doing these endlessly fascinating behind-the-scenes videos, too.

Over the years, in seminal documentaries like the early Signe Chanel in 2005, and Dior and I starring Raf Simons, we have come to discover that narratives—from anecdotes about superstition recounted by the petits mains, to the creative tribulations of fashion geniuses—can be as exhilarating to behold as the final products, the dresses, themselves. Remember Loic Prigent schooling Alexa Chung about how to name couture colors? That was golden. (Or shall we say… sunset over the Seine?)

Hard focus being directed to primarily digital releases also gives the role of fashion photography an important role of creating new couture images to invigorate fashion audiences in these bleak times. Looking at Annie Leibovitz’ photographs of the postponed Costume Institute exhibition, for example, tells me that dedicatedly inquisitive, beautiful photographs are as relevant as ever, and are unlikely to be wholly replaced by webcam campaigns.

In the spirit of the rise of industry conversations over Zoom, maybe we can expect the heads of houses and their teams to open up in similar conversations, too. Yesterday, I found myself tuning in again on  Tim Blanks’ conversation with John Galliano (aptly themed “Creativity in the Digital Age”) for Business of Fashion in 2016. I’m reminded of how inspiring it is to listen to Galliano talk about his maiden couture undertaking at Maison Margiela.

Couture shows of yore may be gone forever, and digital might not be the perfect platform for something so personal as couture, but as Galliano said here, “Imperfection actually gives me more possibilities and avenues to travel down.”