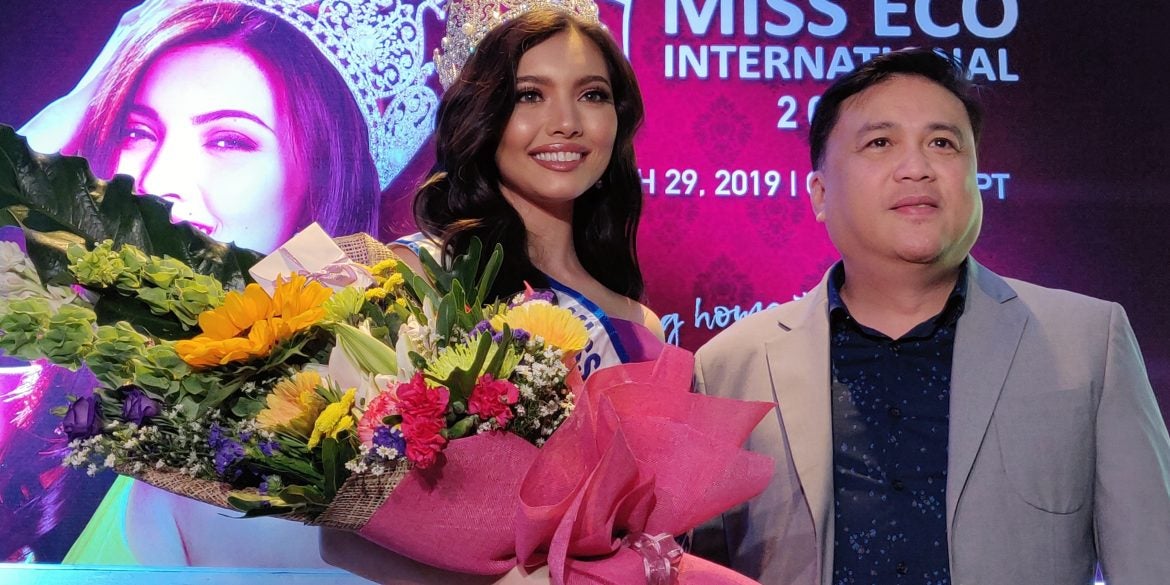 MANILA, Philippines—Filipino-American beauty queen Maureen Montagne had earlier confirmed her refusal to serve the remaining months of the reign vacated by dethroned 2019 Miss Eco International Suheyn Cipriani of Peru, and the man who sent her to the Egypt-based global tilt is not pleased.

“Being the next in line, [Montagne] was automatically qualified to wear the prestigious crown which would have brought glory to our country, would have given her the rare opportunity to become a United Nations ambassador for ecotourism, and possibly would’ve made pageant history with the country’s back-to-back wins for Miss Eco International,” Miss World Philippines (MWP) National Director Arnold Vegafria posted on his Instagram account on the evening of June 2.

The MWP organization sends the Philippines’ representative to the annual Miss Eco International pageant. Montagne finished second in the 2019 pageant, while her predecessor Cynthia Thomalla became the first Filipino woman to win the crown in 2018.

The international organization stripped Cipriani of her title after becoming pregnant. She was supposed to relinquish her crown in the 2020 pageant originally scheduled in May, but the global COVID-19 pandemic forced the organizers to postpone the competition.

Montagne, now a Binibining Pilipinas candidate, explained on her Instagram post: “This past year I have poured my heart and soul to Bb. Pilipinas. I am eternally grateful for everyone’s support on my pageant journey, and I would like to say—I’m sticking with it.”

She added: “I have made a commitment to the Bb. Pilipinas Charities Inc. [whole]heartedly, and I will continue to chase my dreams of competing on the [Bb. Pilipinas] stage in the hopes of representing our country on the international stage.”

But Vegafria minced no words. “What disappointed me even more was that she chose to join another local pageant instead—without even according proper courtesy to the [MWP] and Miss Eco International Organizations. This is a clear violation of the prestigious international pageant’s rules and regulations since her tenure has not yet formally ended,” he said.

The 2020 Miss Eco International pageant has been tentatively rescheduled in September.

“Her conduct unbecoming of a pageant queen is a clear deterrent to her loftier aspirations for yet another crown,” Vegafria continued.

“Despite all these, I still send her my blessings and wish her luck in her future endeavors,” he continued.

Montagne’s pageant journey began in the 2013 Mutya ng Pilipinas pageant, where she represented the Filipino community in Arizona. She finished as first runner-up.

In 2015, she bagged the Miss Arizona USA crown, which sent her to the Miss USA pageant where she finished in the Top 10.

In 2017, she finished second in the Miss World United States pageant.

She returned to the Philippines in 2018 and joined the Miss World Philippines pageant, where she was crowned Miss Eco Philippines.

After Montagne’s refusal to assume to Miss Eco International title, the organizers of the global tilt awarded the crown to fourth runner-up Amy Tinie Adbul Aziz from Malaysia.

“To be the first Malay woman in history to receive an international crown is an achievement that I could have never imagined,” she said on her Instagram account.

“All the Top 5 ladies are incredible women. I hope our sisterhood stays forever,” the Malaysian beauty continued.