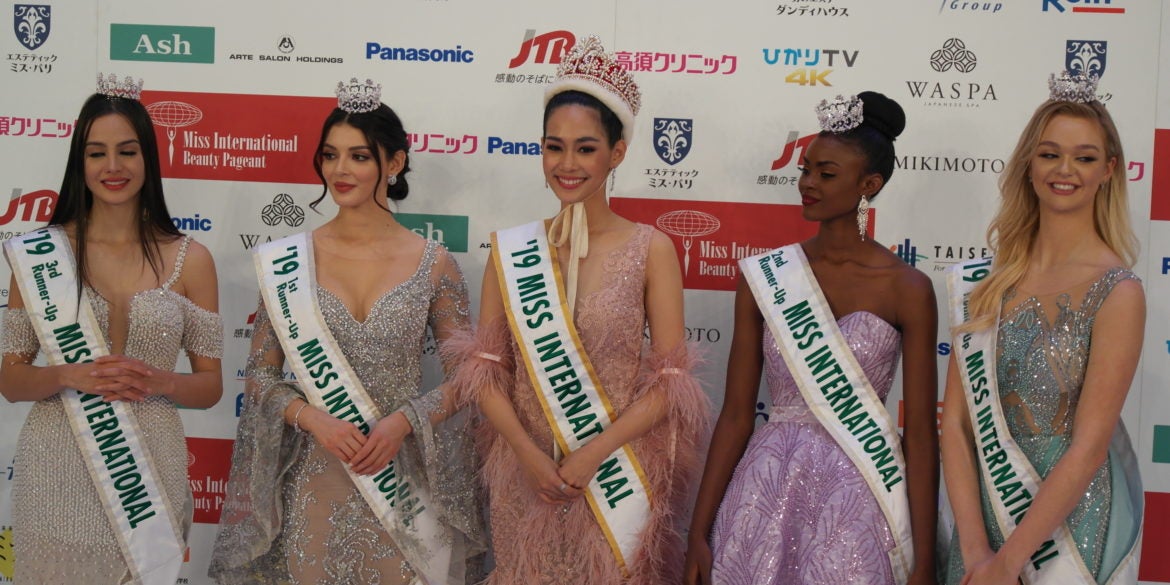 Miss International Sireethorn Leearamwat from Thailand (center) faces the media with runners up (from left) Alejandra Vengoechea from Colombia, Andrea Toscano from Mexico, Evelyn Namatovu Karonde from Uganda, and Harriotte Lane from the United Kingdom after her coronation at the Tokyo Dome City Hall in November 2019./ARMIN P. ADINA

MAKATI CITY, Philippines—The Miss International pageant, one of the most enduring global beauty competitions in the world, will no longer hold its 2020 competition amid the global pandemic caused by COVID-19.

Insiders privy to the development said the International Cultural Association (ICA) in Tokyo, Japan, which organizes the annual beauty pageant, has decided to cancel the 2020 contest, its 60th-anniversary edition, which was originally scheduled on October 29.

The ICA said it will instead stage the next competition in 2021 after the Tokyo Olympics and Paralympics.

The 2020 Summer Olympics, which was supposed to be staged also in Tokyo, Japan, had earlier been canceled because of the COVID-19 pandemic. The International Olympic Committee pushed the Games to 2021.

The ICA, through the annual Miss International beauty pageant, fosters international understanding and camaraderie, and pushes to “cheer all women.”

Leearamwat won in a field of 83 contestants, the pageant’s biggest haul, in ceremonies staged at the Tokyo Dome City Hall on Nov. 12, 2019.

Before the Thai beauty, 1965 winner Ingrid Finger had the longest Miss International reign because of the cancellation of the 1966 competition.

Finger, the first Miss International winner from Germany, bagged the crown in the pageant’s sixth edition staged in Long Beach, California, in the United States, on Aug. 13, 1965, and relinquished her title on April 29, 1967, making her reign for one year and eight months.

From among the global beauty contests, the Philippines is the most successful in the Miss International pageant with six winners.

Gemma Cruz became the first Filipino woman to win a global beauty title when she took home the Miss International crown in 1964, five years before Gloria Diaz became the first Miss Universe winner from the Philippines.

A long title drought came after Mimilanie Marquez won the county’s third crown in 1979. It was Precious Lara Quigaman who broke it in 2005.

Bea Rose Santiago became the fifth Filipino woman to be proclaimed Miss International in 2013, while Kylie Verzosa snagged the title for the Philippines in 2016.

Only Venezuela gave a better performance in the Tokyo-based international competition with a total of eight winners.

The annual Binibining Pilipinas pageant has been sending the Philippines’ representative to the Miss International beauty contest.

The national beauty pageant organization had earlier announced on its official Facebook page that the 2020 Bb. Pilipinas pageant has been postponed “indefinitely.”

In its May 25 announcement, the Bb. Pilipinas Charities Inc. (BPCI) said it “supports the government’s quarantine restrictions and efforts to curb the further spread of COVID-19, which has now become a global pandemic.”

The BPCI added: “Our plans to reschedule the pageant activities shall depend on guidelines and regulations that will be issued by the government in the coming months.

Forty delegates from around the country have already been selected earlier this year for the competition, which was scheduled to culminate at the Smart Araneta Coliseum at the Araneta City in Quezon City on May 31.

A BPCI insider told the Inquirer that the decision to resume the 2020 competition will also depend on the pronouncements that its international partners will make in the coming weeks.

Another international beauty contest, the Philippine-based Miss Asia Pacific International pageant, had earlier announced that it is suspending its 2020 edition “until further notice,” also because of the global COVID-19 pandemic.