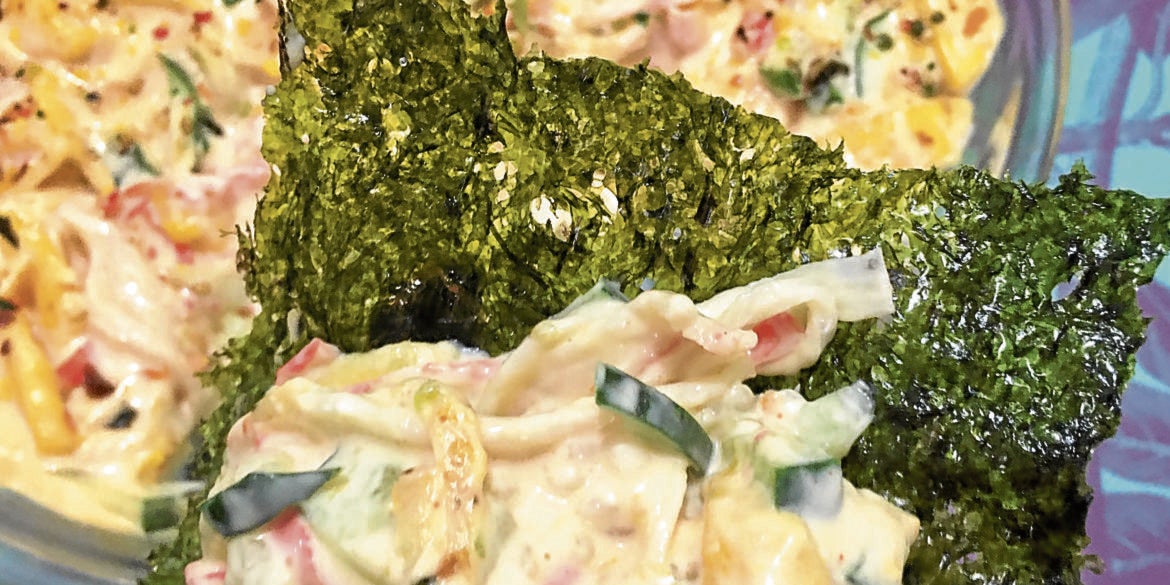 We’d been seeing so many posts of “sushi bake” (that, and sourdough bread and ube cheese pan de sal) nonstop on our social media throughout the quarantine, that we started to crave—not for sushi bake, but for a big bowl of chirashi don.

Since a trip to Seryna in Little Tokyo is out of the question—our will to live is stronger than our passing craving—we figured the next best thing to satiate this hankering for Japanese food is to figure out this sushi bake thing.

Sushi bake’s origins are unclear. It is essentially a deconstructed sushi roll that’s assembled like a casserole in a baking dish and placed under the oven’s broiler to brown a bit, like aburi. To serve, it’s spooned on precut nori, or roasted Japanese seaweed, and eaten like maki or sushi. Soy sauce-wasabi dip optional. We didn’t expect to like it.

During the enhanced community quarantine, many home-based food entrepreneurs have started selling them—from P500 to P1,400 a pop! The fun thing about sushi bake is that you can have as much fun with the recipes. There are no rules. The only standard is the rice and the nori.

Best part if you’re a noncook? There’s no actual cooking involved, save for the rice. You need only your palate (and flavor memories of sushi) to guide you when you combine the flavors. You can work with your favorite ingredients—fresh salmon, maguro tuna, crabmeat, kanikama (imitation crab sticks), uni (sea urchie roe)—or whichever else you can get your hands on. We hightailed it to the popular Japanese grocery nearby; even it is out of many common ingredients, like ebiko (shrimp roe) or tobiko (fish roe). It even ran out of furikake (Japanese rice seasoning)—luckily, we got plenty from Hokkaido just before the pandemic broke.

This past weekend, we tried to make three versions: a spicy one with kani and mangoes, like California roll; another spicy one with fresh maguro tuna, which we purposely didn’t bake; and a salmon-kani version with mozzarella. We initially cringed at the idea of adding cheese and baking a sashimi-grade fish, but hey, don’t trash it until you’ve tried it.

We still dream of chirashi, but these sure did take care of the cravings.

Combine rice, mirin, rice vinegar and 1 Tbsp furikake in a bowl. Transfer into a baking casserole and flatten to evenly cover the bottom.

In a separate bowl, combine the cream cheese, mayo and sriracha/wasabi. Add the kani, mango and cucumber and mix until combined.

Spread kani mixture evenly on top of the rice and sprinkle remaining furikake on top.

Place casserole under the oven’s broiler at 450°F for 10 minutes. (Alternately, you can do this in an oven toaster if it can fit your dish. That’s what we did—in this weather, it didn’t seem worth it to turn the oven to high heat and use it for only 10 minutes. We enjoyed the leftovers just as well, straight from the fridge. Chilled, it was easier to slice, too.)

Combine rice, mirin, rice vinegar, 1 Tbsp sesame oil and 1 Tbsp furikake/toasted sesame in a bowl. In a casserole or square dish, lay one full square of nori. Transfer rice on the nori, and spread evenly to completely cover the seaweed.

Arrange cucumber slices on top of the rice.

In a bowl, combine cream cheese, mayo, sriracha/wasabi, the remaining sesame oil and furikake/sesame. To this add the tuna and combine until the fish cubes are coated with the dressing. Spread on top of the rice mixture.

Serve with precut nori right away, or place under the broiler for 450°F for 10 minutes before serving.

Combine rice, mirin, rice vinegar and 2 Tbsp furikake in a bowl. Transfer into a baking casserole and flatten to evenly cover the bottom.

In a separate bowl, combine the cream cheese, mayo and sriracha/wasabi. Add the salmon and kani and mix.

Arrange avocado on rice, if using.

Spread evenly the salmon and kani mixture atop the rice. Sprinkle the Parmesan and mozzarella on top. Bake under the broiler at 450°F or oven toaster for 10 minutes or until the cheese has melted.

Serve on precut nori, with soy sauce and wasabi dip if you want.