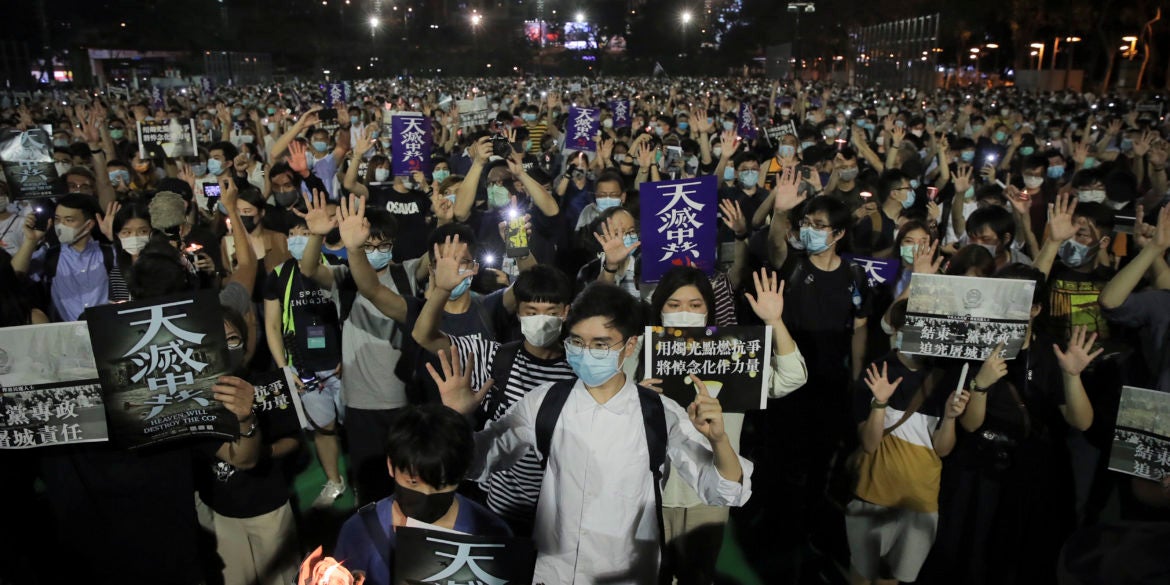 Rallyists gesture with five fingers, signifying the “Fivedemands— not one less,” and posters that read “Heaven will destroy theCCP,” during a vigil for the victimsof the 1989 Tiananmen SquareMassacre at Victoria Park in Causeway Bay,Hong Kong, on June 4. —AP

‘The world must do everything possible to prevent a Tiananmen 2.0, whether in Hong Kong or anywhere else in China, by ensuring a proper human rights monitoring mechanism. We must not repeat the cynicism of the past’

Tens of thousands of candles lit up in different parts of Hong Kong on June 4 to commemorate the 31st anniversary of the Tiananmen Square Massacre in defiance of city authorities’ ban on public assembly, ostensibly to prevent the spread of the new coronavirus disease.

The defiance was as much against Beijing’s attempts all these years to suppress memorials of the Chinese Communist Party’s (CCP) massacre of prodemocracy rallyists in 1989, as the recent move of the CCP’s People’s Congress to adopt a national security resolution seen to erode Hong Kong’s autonomous status as a “special administrative region.”

Passed on May 31, the Hong Kong security law bans treason, secession, sedition, subversion, foreign interference and terrorism. It is Beijing’s version of the Duterte administration’s terror bill, which curiously was passed by Congress only four days later.

Unlike before when the West had largely looked the other way when Beijing would commit human rights abuses, the response from Washington was immediate. US President Donald Trump revoked Hong Kong’s special status under US law, paving the way to strip its trading privileges, accusing China of trampling on the territory’s autonomy. There were also calls on the United Kingdom to protest the security law as a violation of its treaty with Beijing during the 1997 turnover.

British journalist, author and religious freedom activist Benedict Rogers wrote on United Catholic Asian News that the protests signaled a world “beginning to wake up to the sheer brutality, inhumanity and mendacity of the Chinese regime as we see the incarceration of more than a million Uighur Muslims in concentration camps, the way the regime’s repression of truth led to a global pandemic, and the direct threat it now poses to Hong Kong’s autonomy and freedoms.”

He said China had become a danger to the world because of “three factors: failures of foreign policy on the part of many countries toward China, the arrival of Xi Jinping and the rise of Chinese nationalism and expansionism. And all three are interconnected.” And all started in Tiananmen, Rogers declared.

“The international community—and especially the democratic world—were surprisingly quick to put the bloodshed of 1989 behind them… In their naivety, Western liberal democracies believed that despite massacring thousands of protesters, the CCP would still eventually reform politically as the country opened up and developed economically. Even more unwisely, they assumed—wrongly—that the way to develop a positive relationship with the regime was to kowtow as low as possible, remain silent on inconvenient issues such as human rights, fete China’s leaders and sign trade and investment deals worth billions.”

Western rapprochement and even appeasement only emboldened “the butchers of Beijing,” declared Rogers.

He urged the international community to make China account for its human rights abuses.

“Most of all, we must do everything possible to prevent a Tiananmen 2.0, whether in Hong Kong or anywhere else in China, by ensuring a proper human rights monitoring mechanism. That could involve the establishment of a UN special rapporteur, as some have called for. We must not repeat the cynicism of the past, when we stayed silent on human rights after a massacre. Instead, we must speak out for human rights before a massacre is repeated. Let us act now, before it is too late.”

Perhaps the book that underscores best communist Beijing’s campaign to extinguish the memory of the massacre is Louisa Lim’s “The People’s Republic of Amnesia” (2014, Oxford University Press). The book revisits the events of 1989 with profiles and interviews of the participants, including a soldier who was involved in the crackdown and had since rethought and regretted his role. It also investigates another similar bloody crackdown in Chengdu outside of Beijing.

But its most important contribution is its tale of Beijing’s sustained, stubborn and ultimately pathological attempts to suppress and even erase memories of the massacre, and defiant attempts by victims and their families, like the Tiananmen Mothers, to remember and to struggle.

One of the Tianamen Mothers is Zhang Xianling, whose son, Wang Nang, was shot in the head by soldiers during the night between June 3 and 4, 1989. He was still alive but soldiers threatened to kill anyone who tried to help him, including young doctors. When he died in the morning he was buried in a shallow grave nearby, but his decomposing body started to smell so it was brought to the hospital. Only after 10 days was Zhang summoned to identify the body.

Zhang didn’t know how her son ended up there, and it took several months in the face of much official obstruction before she found out what really happened.

In 1998 she went to the spot where her son died and held a simple memorial service. The following day the authorities barred her from leaving her apartment.

Interviewed by Lim, a broadcast journalist and once a correspondent of US National Public Radio, Zhang said she would have wanted to go back to the fatal spot to pour libation and sprinkle flower petals, but she couldn’t because, as Lim writes, “someone will always be watching her. A closed-circuit camera has been installed” and “trained on the exact spot where her son’s body was exhumed… It is a camera dedicated to her alone, waiting for her in case she should ever try again to mourn her dead son.”

As Lim declares, “A simple act of memory is deemed a threat to stability.”

Have the Chinese people forgotten all about Tiananmen, the Cultural Revolution, and the depredations and atrocities of the CCP? Lim writes: “The Chinese people are practiced at not dwelling on the past. One by one, episodes of political turmoil have been expunged from official history or simply forgotten.”

The dissident astrophysicist Fang Lizhi for his part predicted “the failure of the ‘Technique of Forgetting History,’ which has been an important device of rule by the Chinese communists.”In “The Bully of Asia” (2017, Regnery Publishing), US-China expert Steven Mosher writes about probably the most famous Tiananmen veteran, Liu Xiaobo, who won the Nobel Peace Prize in 2010 while in communist prison for subversion.

Liu, Mosher says, had pointed out that the CCP was exploiting Han Chinese chauvinism and turning it into nationalist hysteria against imagined threats from the world facing China.

“[Liu] argued that the Chinese party-state has consciously (and self-servingly) channeled the collective narcissism of the Chinese people into a kind of hypernationalist hysteria. The xenophobic, jingoistic patriotism, he believed, had led to a general loss of reason among the population, obliterated universal values of human rights and rendered the Chinese blind to the fault of their leaders.”

Stoking the fears of the Chinese population about “foreign interference” and “sedition” and “dissent” in Hong Kong and elsewhere was the CCP’s way of justifying its one-party rule and legitimacy, Mosher writes. Any critical or dissenting voice is rendered suspect; it is considered unpatriotic.

Commenting on Liu’s view that the CCP’s “Orwellian party control” over the people “has meant the death of critical thought,” Mosher writes, “A Great Wall against the truth had been erected in the minds of the Chinese. The result was that most of China’s population was by now uncritically accepting of the Party’s propaganda that they mistook for illusions spun by a dictatorial regime intent upon its own aggrandizement for actual reality.”

Unlike Zhang Wang Nang, Liu Xiaobo wasn’t shot in the head and left to die a slow painful death. He was imprisoned for several years until June 2017 when the CCP belatedly announced that he had been on treatment for cancer and had died. His wife Liu Xia had been on house arrest and because of surveillance, couldn’t speak about his condition. But did his jailers rush him to treatment or left him to languish? She merely managed to communicate via video message to a friend: “Can’t operate, can’t do radiotherapy, can’t do chemotherapy.”

It would be good to find out if Liu Xia had been able to hold a simple memorial for her husband. In a way, Liu Xia should now be one of the Tiananmen Mothers. They would try to remember against the Great Wall of Odds erected by the CCP.

By Lim’s reckoning, expunging memory has become totalitarian communist China’s chief, if dubious, accomplishment all these years. And its mastery of forcing people not to remember owes to what Lim calls its “moral vulnerability.”

In short, the CCP tries to stop people from remembering because it is guilty.