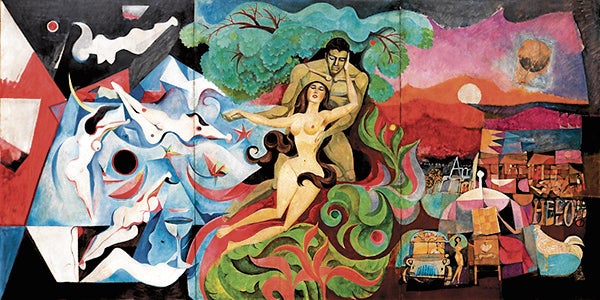 Spectacular” is the word León Gallery uses for its much-awaited Mid-Year Auction on June 20, at 2 p.m.

Copresented by ANCX.ph, the online lifestyle website of the ABS-CBN News Channel, the auction will feature 125 lots.

Main highlight is a monumental three-part work created by master artists Ang Kiukok, Mauro “Malang” Santos and Hugo Yonzon Jr. Titled “Goddesses,” it is a breathtaking triptych that documents Manila in 1974 and was commissioned by publisher Pablo Bustamante Jr. of Bustamante Press. Each artist painted in his own recognizable style, unified by the curvaceous feminine subjects present in all the panels. Created over several boozy nights of poker and boyish banter, the work is an absolute delight.

A powerful work by Nena Saguil is also an auction highlight. The pioneering artist who gained clarity in her productive life in Paris, represented here in this captivating masterpiece. Saguil’s signature style valued both solitude and spirituality. A certain mysticism is reflected in this work that is both dynamic and still.

Anita Magsaysay-Ho, the only woman among the Thirteen Moderns, is represented in the auction by a heartwarming view of the Filipino family, dominated by her vintage women figures—mother and daughter—although the presence of a rooster-bearing father and son makes this additionally adorable. Intellectuals will be struck by a quadriptych by the abstractionist-guru, Florencio B. Concepcion, who was influenced by Josef Albers, whose color theory molded much of 20th-century modern art. Concepcion’s “Symphony” showcases his command of his palette and a finely tuned technique. A deep sense of harmonious tones achieve an alluring depth, inviting the viewer to contemplation.

The man who first brought abstract art to these shores was none other than the National Artist Victorio Edades. Inspired by Cezanne, Picasso and Gauguin, he brought his distinctive vision to social commentary. The engaging “Sacadas” brings to mind thematically his 1928 masterpiece, “The Builders.” In it a line of almost robotic farmhands wait in line to bring bundles of sugarcane to a waiting truck. The background in a gentle pink heightens the sense of dystopia.

While Edades’ paintings are rare and far between, there is also a second work of his in the auction, this time titled “Ikebana.” It is a neat, poetically sparse work, banded by two lines, with a rather solitary set of three ferns in a stick basket that is the perfect epitome of Japanese economy of line.

Napoleon Abueva is one of three Philippine National Artists in the category of Sculpture and remains one of the most underrated in its roster. An extraordinary bas-relief in wood dates from his rise in the 1960s. and reminds one that he was— alongside José Joya—one of the stars of the Philippine Pavilion at the Venice Biennale of 1964. (Incidentally, this sun-spangled sculpture was the imposing door at the entrance of a New Manila home designed by modernist architect Angel E. Nakpil.) A smaller work in stone, featuring a mother holding up her child, is also quite enthralling.

Treasures from an aristocrat’s trove are also to be found at the upcoming sale. A 17th-century ivory Cristo is rarer still because of its height, measuring a glorious 28 inches in height. It also has features true to that century from the bulging eyes and crown of thorns all of a piece with Christ’s head, an important detail that was to disappear by the 1800s.

Also included is an exquisite squash-shaped silver sanctuary lamp of the Rococo period. It has intricate foliate patterns outlined by chasing on its edges; garland-like silver chains attach it to a crested top. This piece showing the dexterity of our Manila artisans in creating such ecclesiastical gems.

An elegantly capacious Laguna aparador from the second quarter of the 19th century would have been a fixture of the exalted bahay-na-bato (stone mansions) of that era. It is made of narra heartwood with a stately reddish-brown color and elaborate ornate carvings. A riot of floral cravings encrust its top and reflect the owner’s elevated station in life. Carved with acanthus scrolls, its console feet jut out from the corners and foliate designs decorate its apron. —Lito B. Zulueta INQ

The Spectacular Mid-Year Auction 2020 will be held on June 20 at León Gallery, Eurovilla 1, Rufino and Legazpi Sts., Legazpi Village, Makati. Access online catalog and register to bid at www.leon-gallery.com.