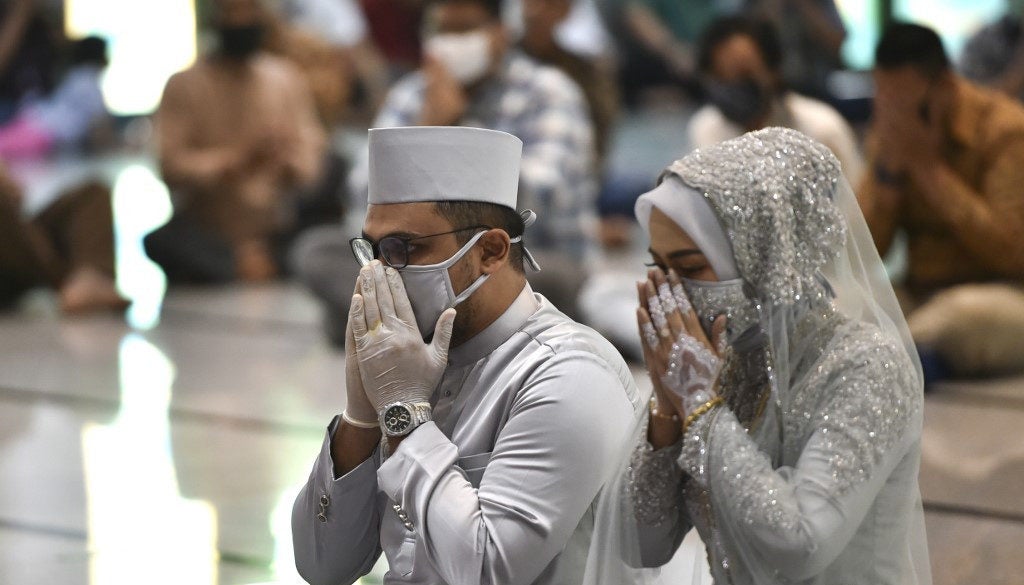 The bride and groom wear face masks during their wedding ceremony at a mosque in Banda Aceh on June 3. (AFP/CHAIDEER MAHYUDDIN )

JAKARTA — When Amelia Vindy, 25, and Ronggo Wanggori, 26, planned their wedding, they visualized a typical Indonesian ceremony: a lavish banquet with around 700 guests of extended family and friends from various circles.

The wedding, which took place in March in Kemang, South Jakarta, ended up being a solemn, small celebration attended by fewer than 20 people.

“The pandemic hit Indonesia less than two weeks prior to the wedding. Any information about [health] protocol was still unclear,” Vindy told The Jakarta Post. “But as the situation developed, we tried to let go of things we couldn’t control. Around one week before D-day, we announced to the guests that we had postponed the wedding reception indefinitely.”

She said the families had spent around Rp 200 million (US$14,102) on wedding preparations, which was not refundable.

However, Vindy found a silver lining in her situation: “I am forever grateful that I could experience an intimate and emotional wedding when the occasion was reduced to a small-scale ceremony,” she said.

The couple still plans to hold a reception once the COVID-19 pandemic subsides.

When the first case in Indonesia was announced in March, the health crisis forced couples around the country to postpone weddings or convert them to smaller events.

Nonetheless, people still celebrate the moment they say “I do” with their loved ones by adapting to the global crisis. One couple married in raincoats, while another turned to technology to be digitally wed.

The Indonesian Religious Affairs Office (KUA) recorded 106,109 marriages around the country in March. The number decreased significantly to just over 50,000 weddings in April and then plummeted to some 12,000 in May.

In Indonesia, elaborate weddings are expected and have become the norm, especially for the upper-middle class, making it a lucrative industry for organizers, decorators, make-up artists, venue providers and catering businesses.

When public figures opt for the less popular way of getting married in simple ceremonies, it is something out of the norm. For instance, make-up artist and content creator Suhay Salim made headlines when she got married without make-up and a wedding dress at a KUA in December 2018.

American psychology center Clarity Clinic has stated that wedding planning can be a source of great stress. It can even be one of the most stressful times in a young couple’s new life together. Planning the wedding can take its toll on the couple’s relationship and strain the event away from celebrating love. Planning a simpler wedding can help tremendously in keeping the bride, the groom and anyone involved sane.

Caecilia Rania, 30, and Paulus Lando, 30, chose a no-reception wedding when they got married in 2017. It was as joyful as they had planned it to be, they said.

“We invited around 150 people to attend the Church ceremony, and only 30 people for a private dinner afterward,” Rania told the Post.

“We wanted this wedding to be attended only by those who are very close to both of us, meaning our closest family and friends who knew our love story,” she said. “We wanted to say the wedding vows in front of God and have it witnessed by those close to our hearts.”

The budget for the wedding, Rp 35 million, was considerably smaller than that for extravagant events. But the couples also faced family members who felt let down for not being invited to the wedding.

“We heard comments such as, ‘Are you out of money?’ or ‘Isn’t it unethical to leave out the extended family?’, but our parents were very supportive and could convey our intention to them smoothly,” Rania said.

In her opinion, the pandemic is a great opportunity for couples who wish to hold smaller weddings. “You can focus more on the marriage instead of the wedding,” she said. “You can allocate your savings for your future child’s education, to buy property or plan a vacation after the pandemic. Moreover, amid this crisis, you don’t have to thoroughly explain your intention to the extended family. They will understand.”