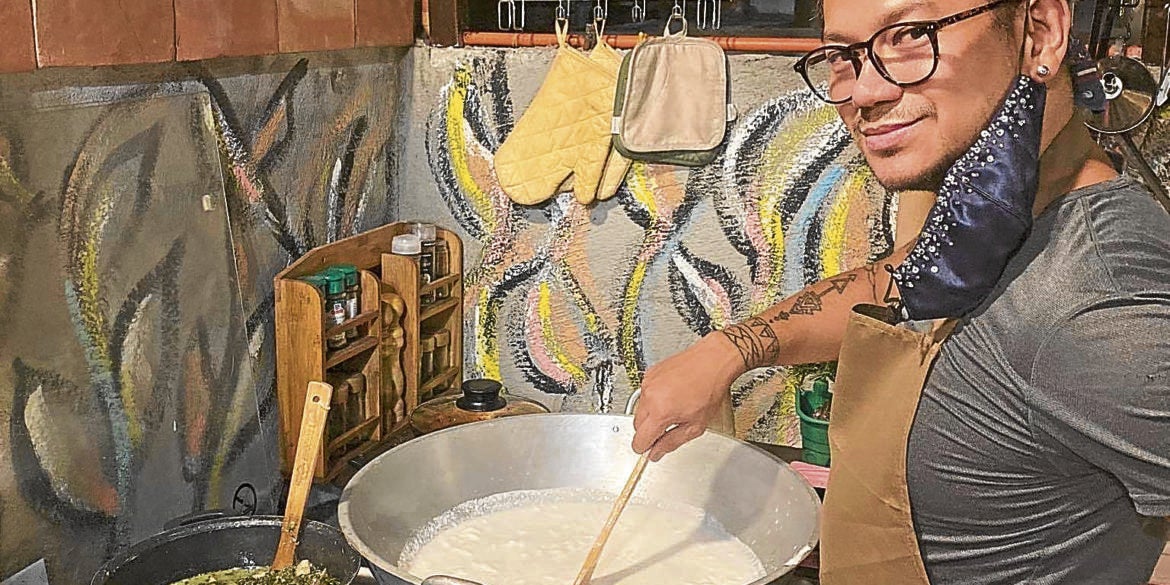 Lourd Ryan Ramos had ambitious plans for 2020. Not only would it be his 20th anniversary as hairstylist, for which he had lined up things to celebrate, he had also wanted to set up a food business. He loves to cook and would get orders from salon clients for his home-cooked dishes. He had planned to go to Italy in September to get formal training in cooking.

Then the pandemic happened. His livelihood took a 180-degree pivot.

“It hastened the implementation of my plans,” Ramos said in a phone interview. “When my five salons closed, I had to think of ways to earn so I could send allowance to many of my staff who had no other means of livelihood. Maparaan tayo (we’re resourceful).”

Ramos grew up watching his Bicolana mother and Ilocana grandmother cook. It was from them that he learned to make many of the dishes he was delivering to customers during the lockdown: humble comfort food that many seemed to crave during quarantine.

Ramos is known for his laing, Tagalog-style dinuguan cooked with tamarind and oregano, and violeta ginataang bilo-bilo, where he mixes either ube (purple yam) or purple sweet potato in his rice flour.

Through word of mouth, Ramos now has food orders for the entire week—dishes such as pinangat na isda sa kamias, spareribs sinigang, kare-kare, mechado, caldereta, menudo, pata tim and what he calls American adobo, a reconstruction of a Mexican-Indian street food he tried in New York City.

On Father’s Day weekend, he sold eight large trays of black truffle pasta to one family alone, a high-profile politician.

Some dishes are delivered frozen; others Ramos prefers to send out freshly cooked, like his bilo-bilo and pinangat (order via @lourdramos on Instagram).

Like Ramos, Jing Monis had plenty of time on his hands when his salons and a barbershop closed in March. The celebrity hairstylist learned to cook in the 1990s when he lived in Malaysia, and again for another three years in Hong Kong. Monis learned to tweak recipes.

However, even as friends would often ask him to cook certain dishes they had tried in his house, Monis didn’t feel that they were things people would want to pay for.

“I didn’t think they were anything special, since it’s ordinary food we ate at home,” Monis said, referring to his chicken and pork adobo with liver, and ginataang puso ng saging paired with pork binagoongan. “I like to experiment with food pairings,” he said.

Then a friend added him on a Facebook group called What’s Cooking, Makati?, where members sold or bought home-cooked specialties during the lockdown. Monis offered his adobo just for fun in the beginning, delivering mostly to neighbors. When he started receiving 300 orders for the dish a week, he got overwhelmed since he was operating only from his condo in Makati.

Monis stopped offering his food on Facebook and instead set up an Instagram account (@jingmonis_kitchen) and moved the cooking to his mother’s house, where there was more space. His secretary (Belen Ebol, tel. 0917-5630875) took the orders while his driver helped prep the camote for his camote cheesecake, another bestseller.

“I’ve heard of couples fighting over the sauce of my adobo,” Monis said with pride. “You can make adobo fried rice with it, you can also add kangkong to make another dish.”

There are also many repeat orders for his tuna pesto pasta with sun-dried tomatoes, a dish he improved on by making his own pesto. It’s Monis’ father’s favorite.

“I dreamed of having my own carinderia or a ‘Jollijeep,’ something simple because I know from friends how hard it is to run a restaurant,” said Monis. “This is the next best thing.”

When salons reopened, however, Monis decided to offer his food only every other week. “People have more options now since many of the restaurants have reopened, and people can now go to the supermarket,” he said. “I want people to miss the food. They won’t care as much when it’s always there.” They’re taking orders this week for next week’s delivery.

“I like to do it this way because some customers become very demanding,” said Monis. “They message me and say, can you make adobo without liver? First, we’re not a restaurant. And second, what’s the point of taking away the element that makes my dish different?”

But he’s very open to criticism, he said. He takes it well when friends and customers give him feedback on how to improve his dishes.

These two salon owners said their food ventures have been quite lucrative. But “there’s no reason to sacrifice the salon. You can do both,” said Ramos, who cooks every other day.

Their food, which start at P350 or P375 per serving, is decidedly more affordable than their haircuts.

Monis’ profits from this side venture have been going to feeding front-liners. Ramos is saving up to pay for his staff’s new coronavirus disease vaccine once it becomes available.

“There’s a different satisfaction in seeing people happy eating your food,” said Ramos. “Besides, I really enjoy cooking. It destresses me.”

Monis discovered, however, that unlike in the salon, “Working in the kitchen is so unglamorous,” he said with a laugh. “In the salon, you don’t sweat. In the kitchen, your every pore ends up smelling like food!”