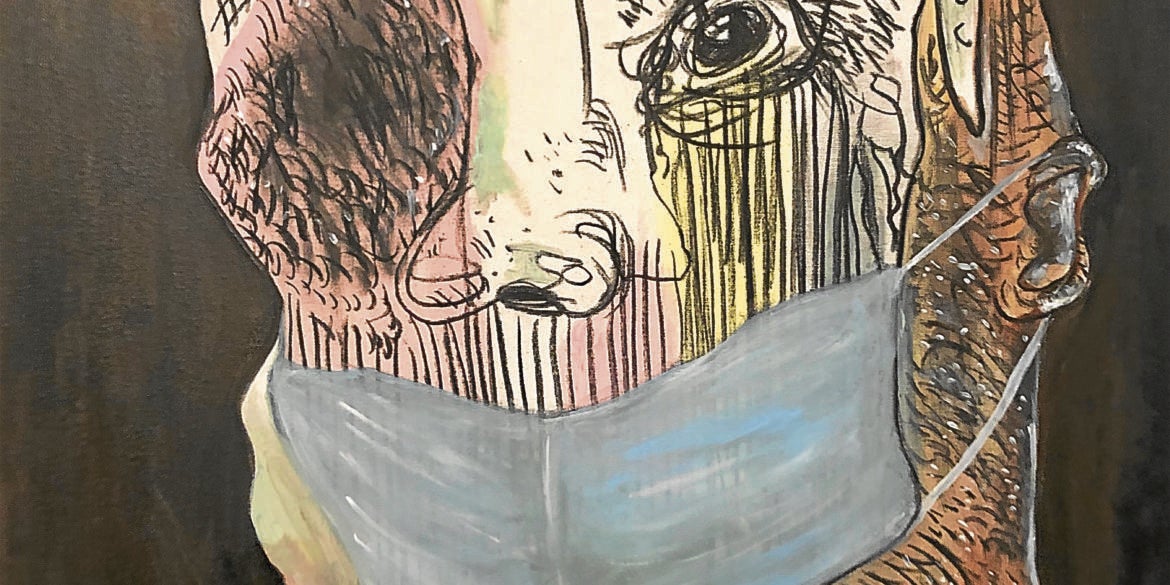 “Prevail” by Angelo Quintos: a visual representation of the artist’s thoughts and fears

Rebooting the art scene: ‘Worst of times can make the best of art’

Collectors continue to buy through virtual exhibits and private viewings

Online art is to art what virtual sex is to sex: At the end of the day, it’s just you and an LED screen.

Far be it from me to knock either act of solitary appreciation, but it’s a different kind of thrill when you’re up close and personal with the real thing.

When the Metro’s hyperactive art scene came to a grinding halt, no thanks to the quarantine, shuttered art spaces lost no time migrating their exhibitions to the virtual world. Overnight, the online art exhibit—whether on social media, a dedicated artist’s website, or as a full-on interactive multisensory head trip, complete with an original soundtrack—became the art world’s “new normal.”

But while the art scene may have gone into temporary quarantine with the rest of us, art certainly has not. Pandemic-themed art has become a bona fide genre as artists sequestered themselves in their studios with not much else to do.

Artworks have even become a kind of currency, sold or auctioned online to raise funds to purchase personal protective equipment and medical equipment for front-line health workers (as well as to sustain the artists themselves).

“A lot of the behind-the-scenes work like coordinating and selling happen mostly online and almost 24/7,” says artist and curator Lena Cobangbang. “With galleries being this busy even during the earlier months of the lockdown, it’s ironic for art to be called nonessential, when its economic wheels didn’t stop.”

“An online platform has its own context, visual trope and language, and spectators,” says Cobangbang. “Online exhibits are nothing new; anything posted on a social media account can already be an online exhibit, such as artists’ portfolios, an exhibit documentation.”

But, she adds, “It is a different space: A virtual space deals with language, with pictures as symbols, so it offers a different kind of reading or viewing, it demands an experience unique to such platform… Whereas a physical exhibit deals with matter, object-hood, and presence/aura, size/scale. Scale in virtual space can be more expansive, in terms of scope and reach and subconscious influence (e.g. memes). For me they are just two different things/spaces—not one can be superior to the other. But for one, as a maker of objects, it would still prefer the realm of the tangible.”

With the loosening of quarantine restrictions and gradual reopening of businesses, Modeka has also mounted a physical exhibition for “Horizons of Inevitability,” which opened June 13 in what could be a foretaste of the new normal for art galleries. Unlike museums which remain restricted public spaces, art galleries are classified as retail outlets, which are allowed to open under the modified community quarantine guidelines.

To begin with, the exhibition space in Makati’s Chino Roces Avenue gallery row was professionally disinfected before the reception for the participating artists, who observed the usual health protocols, i.e. temperature check at the door, masks, hand sanitizer. Transportation was offered to artists needing it. At least one, the painter Romeo Lee, even availed himself of rapid testing for coronavirus, which was being offered in a bar next door (he tested negative).

Private viewing of the works for patrons and collectors is by appointment only, during the gallery’s regular hours, to maintain social distancing.

“Undeniably, coming into the lockdown, it’s been quite a challenge to sell the works, but you have to be creative,” says Modeka’s Bubbles Bermudez.

As in many current exhibits, she adds, a portion of the gallery’s commission from the sales will go to Art Rocks, a nonprofit providing aid to front-line hospitals.

“People like [the private viewing],” she adds. “It makes them feel safe. It makes them feel special. But aside from physical viewing, online viewing will be a staple also. Everyone is moving to maximize all channels, including the virtual. Our shows have always been multisensory, with live performances and a DJ. It’s a whole experience. We tried to replicate that [in our virtual exhibit] to give it that Modeka touch.”

Other galleries actually had low-key “openings” even before “Horizons,” notes Cobangbang, and other galleries are planning shows of their own. Auction houses such as León and Salcedo are gearing up for their second-quarter auctions later this month; the only difference is that they will be online.

“The art scene actually never shut down, in the sense that artists still continued to work, to make art, galleries continued to sell,” adds Cobangbang. “But the practice of communion, the gathering may take some time to get to what it was before, but gradually it will come to it, where everyone thirsts for a space to freely discuss ideas. That shouldn’t be left out of the equation in the whole art practice.”

“I still prefer a physical show,” says painter and art educator Jackie Lozano. Her featured spot in the annual Art in the Park and her second solo exhibition were canceled due to the quarantine, forcing her to go online. She opened her second solo show “Awakening” June 7 on her website (www.ikajpaintings.com/#/awakening).

While she reports that online interest has been encouraging, sales have been slower than in a normal, physical exhibit.

“The part I miss the most in a physical show is the personal interaction with the audience,” she says. “Being in one space with them and the paintings, talking about it, having them see the paintings up close and seeing all the details, and hearing what they think. I didn’t get that this time, and it feels incomplete. I also realized the impact of an opening night, which is a celebration of the works. Everyone’s happy seeing each other, eating and drinking, enjoying the paintings. It’s such a morale boost that I can’t get in an online show.”

Nonetheless, art-making has continued apace with the pandemic. It’s not only the new coronavirus disease (COVID-19) plague providing the inspiration, but also concurrent social issues such as media repression and the antiterror measures providing grist for the artists’ mill.

“Definitely, artists and writers with a social conscience have always responded to the kind of government they have, and this Duterte regime is the worst since Marcos,” says Amadís Ma. Guerrero, author of “Philippine Social Realists,” a survey of the leading figures in this perennial Philippine art movement, which seems to be enjoying a resurgence in the current crisis.

“You can see the protest in the works of social realist veterans as well as emerging artists, and in the theater and literature,” adds Guerrero.

Ironically, art seems to thrive in unsettled times. Certainly, it seems to have weathered the crisis better than many other categories.

“Three months into the quarantine and I can tell you that art is alive and well,” says Derek Flores, who manages the careers of several up-and-coming artists through his DF Art Agency.

“Life in quarantine has actually been a source of inspiration for many artists,” he says. “The pandemic is, after all, one of those monumental periods that people read about in history books many years after. With different perspectives, you get unique interpretations on what this period means to certain artists.”

“There are a lot of conversations happening now about what the new normal should look like,” he says.

“For art collectors, this would most likely mean viewing virtual exhibits. The experiential component of art will have to take a back seat temporarily. Collectors are content with viewing virtual or online exhibits.

“Surprisingly, collectors are still buying during the pandemic. Handling their transactions online ensures that they don’t put themselves at any risk. We aim to operate in this kind of setup for the next six months to a year to keep all our patrons safe from the virus.”

Of course, he adds, quarantine experiences vary from artist to artist. The pandemic is a source of anxiety for two of his artists, the couple Marrie Saplad and Pongbayog, who are caring for an immunocompromised child.

Another, Angelo Quintos, was unable to paint because he couldn’t get his art supplies at the height of the lockdown. Anna Bautista was able to hold a solo virtual exhibit last May, while the Ilocos Sur-based Bryan Teves was spared much of the stress endured by his Manila-based colleagues.

“Health workers and other front-liners may have had the spotlight in recent months, and rightfully so, but you can’t discount the value of the arts in any society,” says Flores.

“Artists can help capture just how it felt like to live in times like these, much like the master painters of history throughout human history. There are certainly a lot of perspectives, a lot of stories that are just waiting to be told.

“The worst of times can make the best of art, and I’ve seen some amazing COVID-19-theme artworks by Cedric dela Paz and Demi Padua. There are a lot more of these artworks being made left and right, which is why there is a group out there spearheading the publication of a COVID-19-theme book. This will be released sometime in 2021, and all DF Art Agency artists will be participating.”