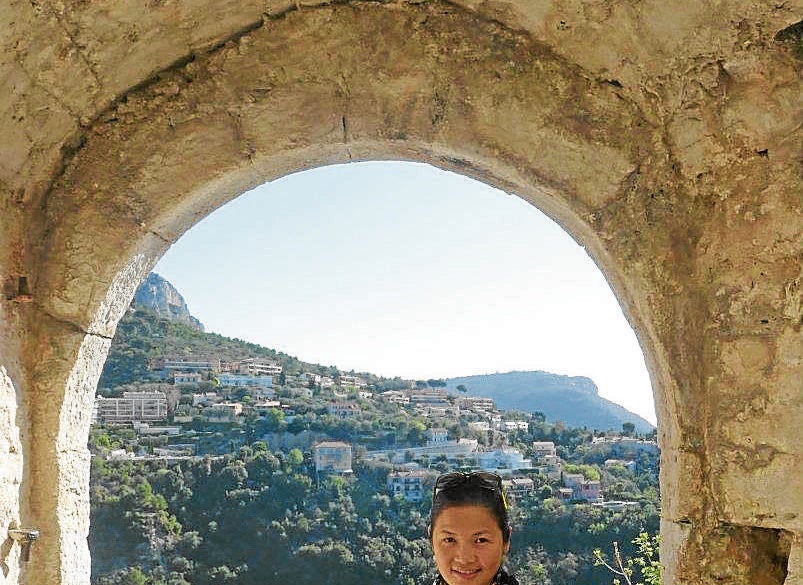 Samantha Sotto in 2012 in Eze, southeastern France, one of the novel’s locations

‘The Beginning of Always’ is her best book so far, her gift to humanity in quarantine in more ways than one

Sometimes, in the rarest of cases, even clickbait can be good for mankind. There was a day when author Samantha Sotto was just wandering around the Internet. “I saw a clickbait article about ‘The Most Kissed Woman in the World’ and couldn’t resist checking it out,” she explained. “It turned out to be the story of ‘L’Inconnue de la Seine’ or the ‘Unknown Woman of the Seine.’” This woman supposedly drowned in the river in the 19th century and a mortuary attendant was so moved by her beauty that he created a death mask that would become an icon of art and beauty, even becoming the basis for the face for Resusci Anne, the training model for teaching cardiopulmonary resuscitation (CPR)—thus the “most kissed” part. “I fell in love with the beautiful irony of how a drowned woman now saved countless lives and decided to offer my own version of her story.”

This story became Sotto’s new novel, “The Beginning of Always,” set in Paris, where Elise Grier finds herself possibly shifting back and forth from the present to 1886 whenever she touches a man named Thomas Mison—who is somehow drowning a little more every day. The research was challenging. “There were a number of locations that don’t exist anymore. I spent a good amount of time on the historical details of the old Paris Morgue and its operations since a lot of scenes take place there. I also had to do research to flesh out characters that had specific fields of expertise such as photography, wine and painting. I’ll give you one guess which part of the research was the most fun to do.”

Educated in Holland and Manila, Sotto, 46, famously wrote her first novel in a coffee shop. She lived in Parañaque and after dropping off her son Nico at the Ateneo, she couldn’t very well go home and then come back to pick him up. So she waited in Starbucks Katipunan and wrote instead.

That first book, “Before Ever After,” was a magical love story filled with her take on immortality with Max and Shelley involving Boracay and eggs. “Before” was published in the United States in 2011 by Penguin Random House. Sotto’s second book, “Love and Gravity,” was published in 2017 by Ballantine and it involved an unlikely correspondence between a woman in the present named Andrea and Isaac Newton, yes, that Isaac Newton.

Sotto decided to change things up for her third book, 2019’s free and digital-only “A Dream of Trees.” “My third book was a passion project that didn’t quite fit into the genre I usually write. It’s a story that explores life, hope, healing and forgiveness in the context of a person’s final moments. I celebrated my 10th year in the industry by giving it out for free on my birthday.”In a way, Sotto explained that “Beginning” took the longest of her books to write, as its seed was planted almost a decade ago, right after the release of “Before.” She had written a book that was never published—much to her relief today—but that book become in her words an “organ donor” for her later books. “Its heart, however, remained intact,” she said. “This story evolved into ‘Beginning.’ Unfortunately, I reached the finish line for the novel at the same time the universe decided to throw the biggest plot twist of 2020. Publishing a love story in the midst of a pandemic probably isn’t the best strategy to create a bestseller, but if it manages to make a few people smile, I think the 10 years that went into its making would have been worth it.”

“Beginning” is really much more of a mystery than a love or time travel story as readers will want to get to the end to find out what exactly is going on. “Growing up, I loved escaping into a good Agatha Christie mystery,” she said. “I thought it would be a fun challenge to craft an old school mystery and blend it with magical realism and love. I also used the book as a way to explore a theme that was almost the opposite of my debut novel’s concept. ‘Before Ever After’ was about a man who had an endless amount of time. The ‘Beginning of Always’ is about characters that are running out of it.” Engaging and well-written, it is Sotto’s best book thus far.

She also went the same independent, digital-only route for “Beginning” as the previous book (though she would be open to a print version if there’s a demand) with an additional significance. “As a writer, this crisis made me feel very sad, frustrated and ‘nonessential,’” she said. “I had no useful skills to contribute. Eventually, I came to the realization that while I was never going to come up with a cure for this virus, I could, perhaps, offer some people a bit of comfort in the form of an escape into a story set in a more magical time and place. I also figured that by releasing the book myself, I could maximize the proceeds I could donate to those affected by the pandemic. We’ve been donating food to families in need as well as front-liners since the beginning of the quarantine and I intend to continue these efforts using part of the proceeds from the book.”

Aside from being an independent, hybrid author, Sotto no longer writes in Starbucks. “I have a little writing nook in my home that I’ve furnished with a vintage wooden desk that I found in my in-laws’ garage,” she said. “My coffee isn’t quite as fancy as what I used to get at coffee shops, but it’s a one-minute commute to my office and I get to take my dogs to work so I’m not complaining.”Married to Joseph Yambao, Sotto has two children: son Nico, who was in prep when she was writing “Before Ever After,” will be in college next year while daughter Cai, who was then in preschool, has now designed the book covers for “Dream” and “Beginning.” “It’s easy to guess which covers are my favorite,” she said. She considers her two dogs—golden retriever Tennant and rescue “asPin” (asong Pinoy) Alfie—her children as well.

The writing journey continues for her. “I’m debating on polishing a draft that I finished for NaNoWriMo (National Novel Writing Month which is held in November) last year or starting something new,” she said. “There are a lot of things going on in the world right now, and I want to spend some time taking it all in and educating myself before I decide what I’d like to say next.”

This new book and the actions she’s taken are Sam Sotto’s gifts to a world that need all the comfort it can get. “Despite the magical elements of the book, ‘The Beginning of Always’ is built on a very simple truth: We all have a finite amount of time in this world. Each day presents a choice on how we want to live it.” INQ