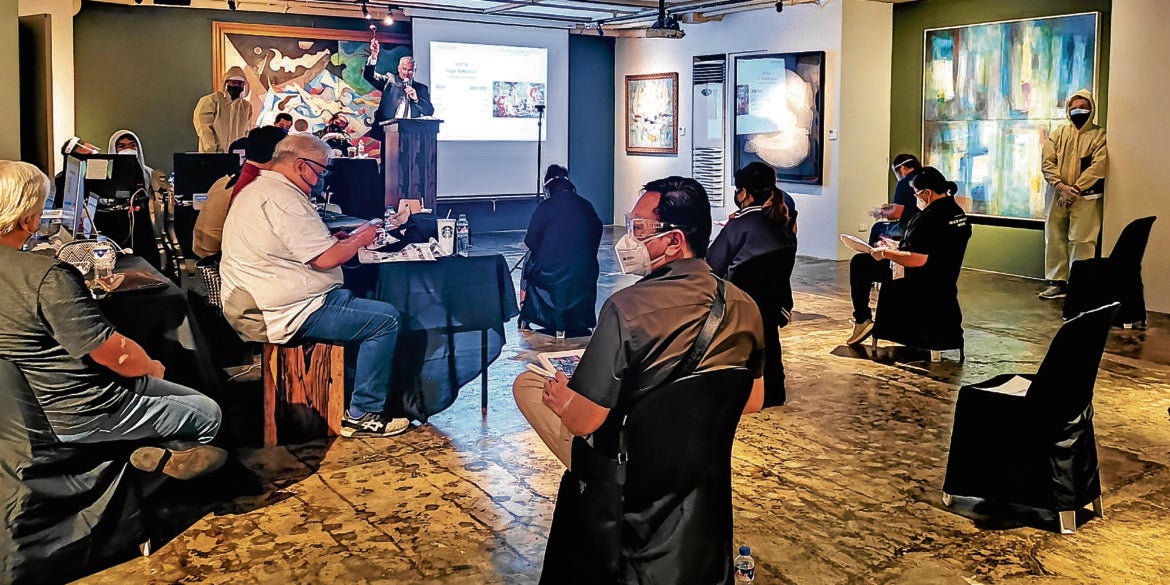 Scene at León Gallery. Due to physical distancing, only a few bidders were admitted to the sale room.

A major Lao Lianben painting that had been discovered in Bangkal, Makati’s famous flea market and bought there for what the tabloids described as “the princely sum” of P3,000, was bid out during León Gallery Spectacular Mid-Year Auction June 20.

“Tryst,” a 1973 48” x 34” mixed-media work, scaled the heights and was declared sold for P3.9 million, the first major sale during these times of new coronavirus disease.

The biggest seller however was Mark Justiniani’s “The Spectator,” which was sold for P11.5 million.

Just as impressive was the auction debut of twentysomething artist Marc Aran Reyes, whose “Audacious Figure” sold for P7.7 million.

Also posting a record sale was contemporary artist Dino Gabito’s “Shroud No. One,” the very first in his sought-after signature series. Expectations ran high for this work which exceeded the crowd estimates by 35 percent and rose to P1.3 million for a relatively smaller work.

Zean Cabangis also established a world record for “Before We Leave” at P1.98 million.

“Of course, the monarch of the entire sale was no less than Mark Justiniani who is approaching the zenith of his career, having triumphed at the Venice Biennale last year,” said León consultant Lisa Nakpil. “His ironically titled ‘The Spectator’ shows an everyman crowning himself on a world stage, while a figure we can only guess is Justiniani himself watches from the nose-bleed section above. This work trounced the competition at a dizzying P13.4 million (with buyer’s premium).”

But because of quarantine measures, the auction at León’s Eurovilla II space in Legazpi Village, Makati, had to observe physical distancing and other health protocols.

“Due to the limitation of physical attendance in our sale room, we had to encourage more phone and internet bids in the auction,” Ponce de León told Inquirer.

“Instead of a capacity of 300 people in our sale room, we could only allow 15 percent of that. It was challenging but well worth the extra effort we made to allow the same volume of bids from online and telephone bids. Bid prices were the same as we treated the auction the same as any of our regular quarterly auctions. The interest remained the same as interested parties had the same zest for the particular pieces they liked and found ways to examine the lots through image requests or intermittent visits to the gallery.”

Ponce de León said the auction results were “encouraging as many world records were made.”

“It was a world record for a Mark Justiniani sold at auction as well as an excellent auction debut for young artist Marc Aran Reyes,” he said. “Romulo Galicano, Macario Vitalis, Marcel Antonio and Dino Gabito showed very strong results.”“Macario Vitalis, who is sometimes underrated, received the consistent recognition he deserves,” he added. His work “Still Life with Bottle” rang in at P1.17 million.

Ronson Culibrina’s two beguiling works—one, a riff on Juan Luna’s “En el Palco (In the Theater Box),” the other on Fernando Amorsolo’s “Under the Mango Tree”—each came in at P1.9 million and P1.5 million, respectively.

An extravagantly sized 17th-century ivory Cristo reached nearly P4 million as well, indicating that precious treasures from the past are also still in demand.

León Gallery had prepared for the challenges of the quarantine “serendipitously,” said Nakpil. “The auction house is known for pioneering the virtual auction room as well as taking auctions to online platforms. For the June auction, it featured a live auctioneer responding to online and telephone bids in real-time.”

“We will continue as life goes on,” said Ponce de León. “We will have our quarterly big auctions as usual and our quarterly online auctions to go as usual. We will improve our online presence as it is the way to move forward to be attuned with the times.” —Lito B. Zulueta, Dexter Matilla, CONTRIBUTED INQ