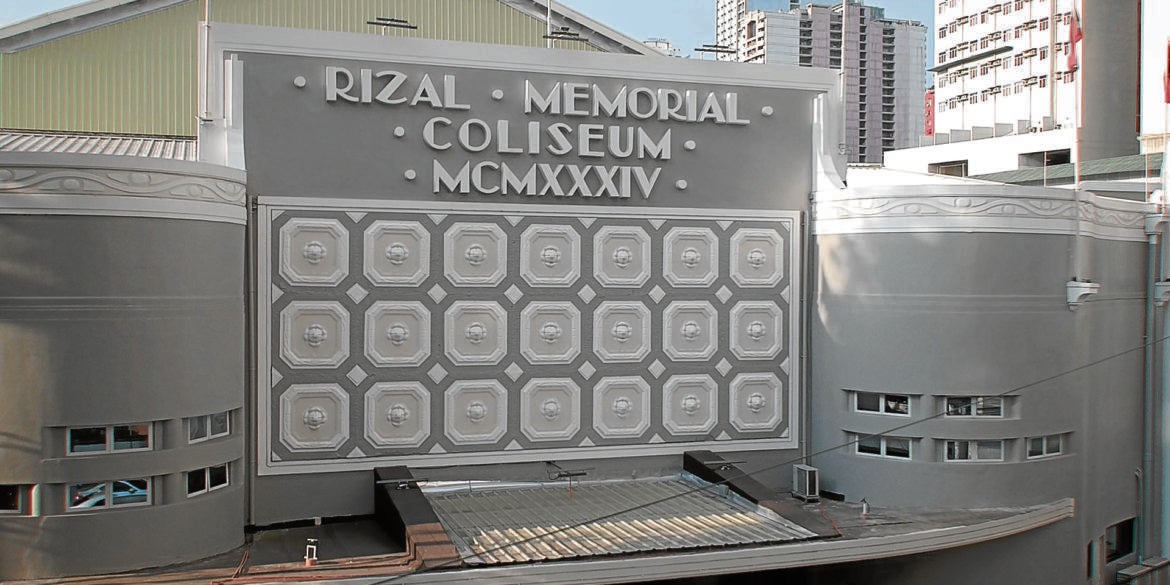 Rizal Memorial Coliseum is back in fine form

In the face of allegations of overspending, logistical mishaps and the displacement of Aeta indigenous people at New Clark City, one good thing about the Philippines’ hosting of the 30th Southeast Asian Games (SEA Games) late last year is the restoration and renovation of the Rizal Memorial Coliseum (RMC) in Manila.

The Art Deco structure, designed by Juan Arellano and inaugurated in 1934 when the Philippines hosted the Far Eastern Games, is perhaps the only one of its kind in Asia, a modernist structure that is a sports complex, according to architecture historian and teacher Gerard Rey Lico.

Himself an architect, Lico and his staff helped M.E. Sicat Constuction Inc. renovated the building in just four months! And the collaboration between architect and construction firm resulted in a major restoration project that could be a model to save and restore other endangered heritage structures in the country.

The restoration is chronicled in “Rizal Revival,” a feature-length documentary produced by Docu Lico which will have a free online premiere on June 30, 8 p.m., on the Docu Lico Facebook page.According to Lico, the documentary is an educational tool to foster appreciation of RMC and to raise awareness about the country’s heritage structures and historic landmarks and the need for their conservation.

“The film makes use of personal narratives to craft the story of RMC, reaching its pinnacle with its heroic restoration in time for the 30th SEA Games and its later use as a Covid-19 (new coronavirus disease) quarantine facility. The documentary navigates these personal insights, providing the viewer with the histories, contexts, experiences and a never before seen inside tour of the rehabilitation process of the Coliseum.”Previewing the documentary, one would be impressed at how Lico, Sicat and their teams surmounted the challenges of restoring and renovating RMC in record time.

The project was timely. In 2016, the Manila City Hall under Mayor Joseph Estrada had announced a plan to have businessman Enrique Razon take over RMC and the Ninoy Aquino Memorial Stadium into a mixed-use commercial development which would mean demolishing the structures.

In 2017, the National Historical Commission of the Philippines declared the structures “national historical landmarks,” stopping City Hall from demolishing them.

In August 2019, the Philippine Amusement and Gaming Corp. announced the grant of P5 billion for the Philippines to host the SEA Games.

Michael Allan Sicat, president of M.E. Sicat Construction Inc., said his firm won the bid to renovate RMC. Since he had also wanted to go into restoration and conservation, he asked Lico to help restore and renovate RMC.

“We were tasked to restoring the entire coliseum back to a playable state,” said site architect Timothy Augustus Ong from Lico’s team.

Lico, Ong and the other architects described RMC as decrepit and in a general state of “deterioration.” Particularly in a horrible state were the bathrooms and toilets.

Lico said restoration required a “multidisciplinary team of experts” and much research was done to determine the original design and look of Arellano’s building.

“The key here is to protect the integrity and authenticity of the building and (preserve) its significance,” he said.

Lico assured that “whatever interventions (we made are) reversible, distinguishable, compatible and subordinate to the host structure, so dapat bida lagi ang lumang building.”The canopy that was built around the complex in the ’70s was removed, which “unveiled the beauty” of Arellano’s work, revealing its “robust, bold architectural form.”

As an Art Deco building, RMC tried to ape the bold, flowing lines of the athletic human form and kinesis, so that there are no sharp edges, but robust, even rotund lines.

Further research showed that the seemingly irregularly shaped columns with rounded bases but with tops seeming to have been slashed were really meant for curved lighting fixtures with metallic bands. The design was restored.

A modern Art Deco building also tried to approximate industrial designs, especially ships, so that RMC had a number of portholes and rounded windows with grills. In many instances, these had been boarded up through the decades, so the portholes were restored.

Mercury vapor and high-intensity lights were replaced by LED fixtures. In installing air-conditioning, the ducting was exposed so as to indicate that it was an addition to the original design.

This approach also also guided work on the drainage.

“Given time constraints, and in order to be least invasive, we decided on exposed downspouts,” said Ong.

More toilets and shower facilities were built. These facilities have Art Deco mirrors and partitions.

One major change was the original faux marbling. Lico said they installed real marble instead.

“The essence of Art Deco is luxury,” he explained. “So why not use real marble? The building itself was (supposed to be) a spectacle.”

The spectacle that was and is RMC was unveiled during the 30th SEA Games. It helped that the venue hosted the crowd-drawing gymnastics events, in which World Artistic Gymnastics champion Carlos Yulo from the Philippines won golds and consolidated his reputation as the region’s foremost gymnast.

To further highlight the heritage value of the structure, a gallery has been set up showing a photographic history of the important events that were held at RMC. The gallery could help guide those who would work later to conserve and restore the building.

“We succeeded in reinstating RMC in the collective imagination of the people,” Lico said. “It’s now a source of pride from where people could draw their culture and identity.”

Lico said he hoped that the restoration of RMC would be a “catalyst.” “Now it is possible to really revitalize old buildings,” he declared. INQ