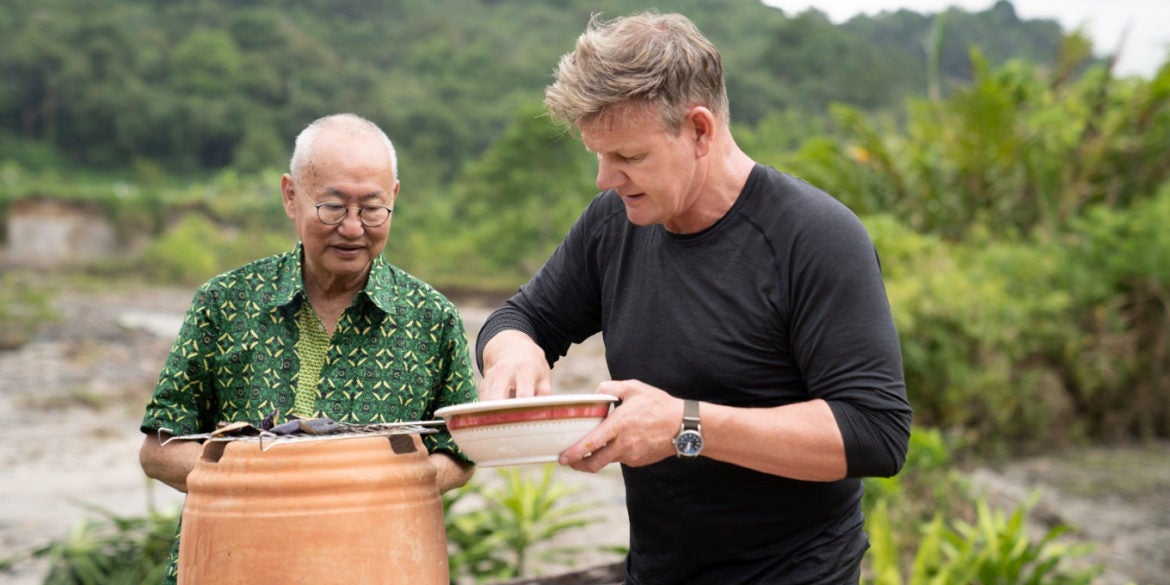 Neither raw nor crispy: Gordon Ramsay gets it right cooking ‘rendang’

JAKARTA — The second season of the National Geographic series Gordon Ramsay: Uncharted premiered on June 7, returning with new adventures that include West Sumatra.

The fourth episode of the series, which also features legendary Indonesian chef  William Wongso, premiered on Monday at 9 a.m.

It opens with Ramsay visiting Istano Rajo Basa Pagaruyung, the royal palace of the former Pagaruyung Kingdom in Tanah Datar regency. Wearing a casual outfit in all black, the British celebrity chef-slash-restaurateur meets William, who asks him to change into traditional Minang attire with a songket (traditional gold-threaded woven fabric) and songkok (a traditional male hat).

William then introduces Ramsay to bajamba, an under-the-radar Minangkabau communal eating tradition. As the 73-year-old culinary master introduces Ramsay to a variety of dishes, William challenges him to a rendang (beef slow-cooked in coconut milk and spices) cook-off that will be judged by West Sumatra Governor Irwan Prayitno at the end of the week.

Rendang is a widely beloved Indonesian dish. In 2011, a CNN poll named rendang one of the world’s most delicious foods.

Despite hailing from West Sumatra, rendang is popular across the archipelago. It was not a  surprise, therefore, that a comment about “non-crispy” rendang made by MasterChef UK judges John Torode and Gregg Wallace in 2018 angered many Indonesian.

Fortunately, Ramsay learned how to cook rendang properly with the help of William, who has mastered over 200 rendang varieties.

Accompanied by food writer Ade Putri Paramadita, Ramsay embarks on an Indonesian food adventure and finds himself eating bika (coconut-based cake) and durian. While he was impressed by bika, he has a different impression of durian, conceded that he could not stand the aroma.

“The things I do for rendang,” he says on the show.

Meanwhile, with a local guide Rusti, he goes fishing on a “pirate-like” boat. He also tries his hand at a giant mortar and pestle to make rendang paste at a traditional market, accompanied by rendang master Katuju.

As a short food documentary, the fourth episode of Gordon Ramsay: Uncharted highlights the beauty of West Sumatra’s landscape and of course, the art of making rendang.

The show features aerial shots that capture the untouched landscape of the province.

When it comes to rendang, the episode explains in detail how to make the dish from scratch and the complexity of its flavors.

It also features heart-warming scenes, such as local residents and their everyday routine at the traditional market, laughing over Ramsay’s attempt to make rendang paste and William’s amusement upon seeing Ramsay getting splashed by buffalo excrement.

However, it lacks a definitive conclusion when it comes to the result of Ramsay’s rendang-making efforts. Although William seemed to approve of Ramsay’s method of grilling the beef prior to putting it in the paste, saying “This is the first time a foreign chef is cooking rendang the right way”, viewers may be left wondering whether the method really worked and how it influenced the dish’s flavor.