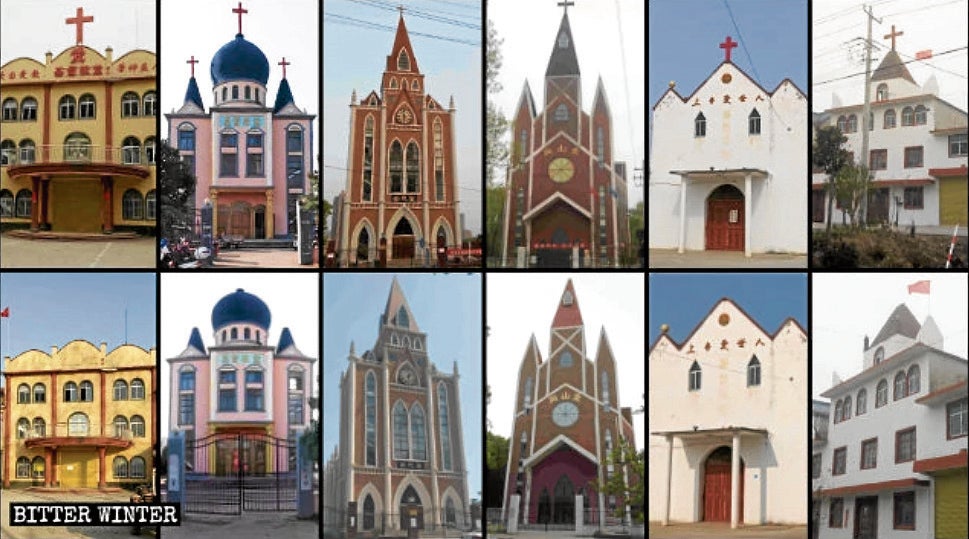 Numerous churches in Anhui, China, had their crosses removed between January and April. —BITTERWINTER.ORG

The state of religious freedom in China has further worsened over the past year, as the Chinese Communist Party (CCP) embarked on a five-year plan to “Sinicize” houses of worship by toppling churches and replacing crosses with portraits of Chinese leader Xi Jinping, according to the 2019 International Religious Freedom Report of the US State Department released in June.

The release of the report followed the campaign of the CCP starting April to remove crosses and demolish unauthorized churches. According to the Union of Catholic Asian News (Ucan; www.ucanews.com), some 500 crosses were removed.

Quoting Protestant pastor Paul Lee, Ucan reported that the crosses were removed in a 500-kilometer stretch from Zhejiang to Anhui.

Some of the crosses removed belonged to churches with more than a century of history, according to a July 2 report by Bitter Winter, “a magazine on religious liberty and human rights in China” (bitterwinter.org) that is cited in the US State Department report.

Bitter Winter reported “that local officials claimed that the cross-removal campaign was being implemented in line with a national policy, which requires to eliminate all Christian, Islamic, Buddhist and other religious symbols.”

“We support the state and comply with its regulations,” a Protestant congregation member was quoted by Bitter Winter. “We can have a dialogue with the government if it thinks that we have done something wrong, but they can’t persecute us this way. Officials did not show any documents, fearing that people would implicate them with anything in writing. They only conveyed verbal orders and forced us to obey them.”

The recent Ucan and Bitter Winter reports dovetail with the US State Department report. Secretary of State Mike Pompeo in a press conference summed up the situation in China: “China continues its decadeslong war on faith,” he declared. “The mass detentions of Uighurs in Xinjiang [continue]. So does the repression of Tibetans and Buddhists and Falun Gong and Christians.”

In 2019, according to the report, the Chinese government “tortured, physically abused, arrested, detained, sentenced to prison, subjected to forced indoctrination in CCP ideology, or harassed adherents of both registered and unregistered religious groups for activities related to their religious beliefs and practices,” said the report.

“The government continued a campaign of religious Sinicization to bring all religious doctrine and practice in line with CCP doctrine, adopting a formal five-year plan on Jan. 7. Officials across the country shut down religious venues, including some that were affiliated with the authorized patriotic religious associations, and placed surveillance cameras in houses of worship as a condition of allowing these venues to continue operating. There were numerous reports that authorities closed or destroyed Islamic, Christian, Buddhist, Taoist, Jewish, and other houses of worship and destroyed public displays of religious symbols throughout the country.”

The “war on faith” is justified by the CCP as a campaign against “the ‘three evils’ of ‘ethnic separatism, religious extremism and violent terrorism,’” the report said.

The “war on faith” has been also particularly harsh on Uighur Muslims and Christians in Xinjiang.

The report said the communist government since 2017 had “arbitrarily detained more than one million Uighurs, ethnic Kazakhs, Hui and members of other Muslim groups, as well as Uighur Christians, in specially built or converted internment camps in Xinjiang and subjected them to forced disappearance, political indoctrination, torture, physical and psychological abuse, including forced sterilization and sexual abuse, forced labor and prolonged detention without trial because of their religion and ethnicity.”

US-based Australian Sinologist Ross Terrill has noted that because of the absence of a major “transcendental religion” in its history, “the religion of China is China.” The observation has been reinforced now that China is ruled by atheistic communism. This explains the replacement of religious symbols with portraits of Xi Jin-ping; this is typical of Stalinism and communist “idol worship” across modern history.

Also singled out in the US State Department report were Muslim states Iran and Saudi Arabia. The report noted that minority religionists were imprisoned by Iran, which had also executed members of the minorities on charges of “enmity against God.” Saudi Arabia on the other hand continues to be the only country in the world without a Christian church.

Bright spots were the United Arab Emirates, which hosted in February 2019 the first papal visit to the Arabian Pensinsula. UAE also became the first Middle East nation to permit the opening of a church of the Church of Jesus Christ of Latter-day Saints.

The State Department also praised Gambia in West Africa, for bringing a case to the International Court of Justice concerning alleged crimes against the Muslim Rohingya in Burma and Uzbekistan in central Asia, which the department said carried out no police raids on “unregistered” religious gatherings in 2019, after having conducted more than 350 before.” INQ