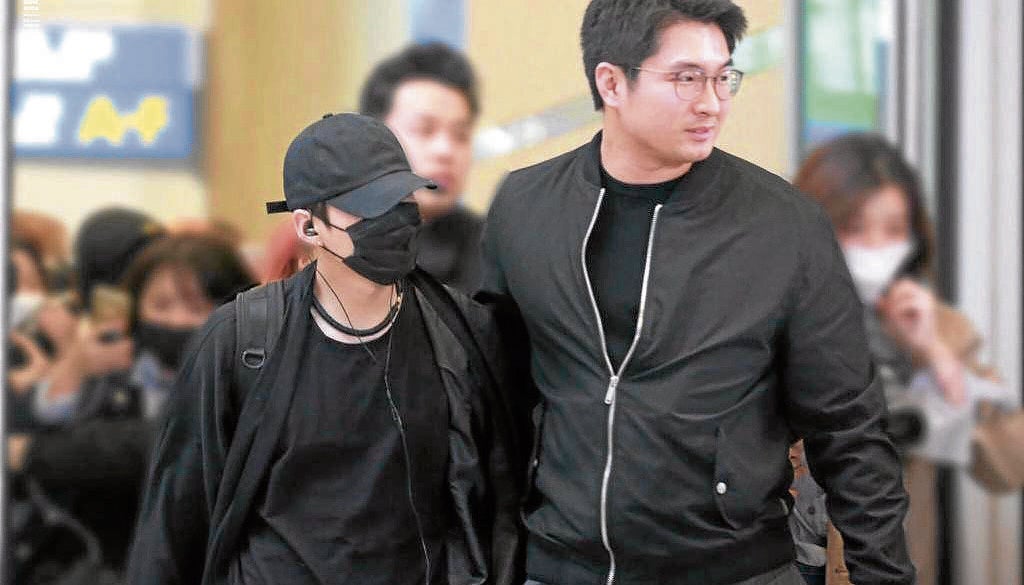 Manager Sejin, here with Suga, is a reassuring presence around BTS so that Army has grown to love him, too. —ARMY’SAMINO/AMINOAPPS.COM

Is there any other musical act in the world whose contribution to their country’s GDP is bigger than that of their national flag carrier?

To our knowledge, the HBS case study by Anita Elberse and Lizzy Woodham, is the first Harvard study to focus on a K-pop band.

That Big Hit and BTS made it to the radar of one of the world’s most prestigious business schools was due to their international success. Is there any other musical act in the world whose contribution to its country’s GDP is bigger than that of their national flag carrier?

The 22-page study gives a vivid idea of how, under Big Hit’s management, the boys grew from being teen trainees dreaming of becoming “idols” (as K-pop stars are called) to men in their 20s encouraged to value who they are and who know their worth—which doesn’t necessarily equate to money. At Big Hit, collaboration between agency and artists is fundamental.

“We emphasize the notion of winning together. We want to break an industry practice that is very hierarchical, where artists are at the bottom,” said Sejin Kim, coleader of Big Hit’s artist protocol department.

This is “Manager Sejin,” the longtime Big Hit manager the boys adore. He’s become a celebrity of sorts in the fandom. He has an assuring and comforting presence, and is in charge of keeping the boys safe—it doesn’t hurt, of course, that he’s very handsome.

Big Hit chair and chief executive officer Bang Si-hyuk, the founding father of Bangtan Sonyeondan (BTS), made sure his company is a place where artists can grow and thrive. Bang is a successful songwriter himself, earning him the nickname “Hitman Bang.” He confirmed in the study that his agency’s name was a play on this moniker. Big Hit, it seems, was destined to give the world one of its greatest hits.

But as every success story goes, Big Hit initially struggled. It was how Bang and his colleagues, led by global and business CEO Lenzo Yoon, strategically dealt with the company’s major setback in 2011, that defined their path to success.

It is quite rare to hear of a company make all its employees drop everything, as Yoon said, to analyze “what we were doing wrong, and what we needed to do to improve.

“We posed ourselves a few key questions: What is an idol? What is this business we are in? Who are the fans, and what are their characteristics? We wanted to figure out the formula we needed to get the success we wanted,” Yoon told Harvard.

He added that they studied their competitors and their best practices. Bang said company executives had a three-day workshop to process what they found from their research and market study.

Yoon compared everything they learned to finding the wild ginseng, called sansam, which in Korea is rare and so precious.

Another revealing insight of Big Hit, according to Bang, was that, contrary to the idea that digital technology brings people closer together, “people will feel more isolated.”

“And so, we need to find a way to help them, inspire them, and heal them,” Bang said.

Not mentioned in the HBS study is that Big Hit’s mission is “Music and Artist for Healing.” Was this a result of the company workshop?

“Healing, like in English, means emotional comfort. But in the Korean context, since Koreans are always pressured and stressed out by social norms or modern life, it has become an important notion in culture or lifestyle,” said Kyung Min-bae, assistant professorial fellow at the University of the Philippines (UP) Department of Linguistics and research fellow at the UP Korea Research Center. “These days, it is sohwakhaeng, or small but precious happiness, quoted in Haruki Murakami’s novel. Koreans are trying to feel more simple happiness than achieving grand ones,” she said in an interview with Lifestyle.

It was a mission for Big Hit that would resonate with people all over the world.

BTS did not become global stars overnight. It was an uphill climb for the septet in the highly competitive K-pop industry. The challenges that BTS and Army faced, and continue to face together, tightly bind the artists and their fans.

Of course, there’s also Bang’s sharp instincts. For example, the Harvard study revealed that not everyone in Big Hit was comfortable with “Fire,” the lead single for “The Most Beautiful Moment in Life: Young Forever” album, because it wasn’t a “typical K-pop sound.”

It sounded “more American than Korean,” Bang said. But he felt it was time to test if BTS could make it to a bigger market, after establishing themselves in their home country.

Bang was right. “Fire,” with its electro-pop sound, lyrics about liberating oneself from society’s pressures, and impressive choreography, gave BTS a foothold on the US market.

Big Hit also introduced several innovations for artists and fans. Among them is the endless content available on different social media platforms, such as the “Bangtan Bomb,” which shows short clips of members behind the scenes. For fans, being able to see the personal interactions of the members off-stage is just as exciting as seeing them perform, building a more personal connection between BTS and Army.

Bang, who created K-pop’s trainee-based talent development model, like SM Entertainment’s Lee So-man and JYP’s Park Jin-young did, told Harvard, “At Big Hit, we work hard to strike the ideal balance between the efficiency of the system and respect for each artist’s individuality.”

Big Hit also works with its artists in determining their “creative vision.” From the get-go, Bang said Big Hit’s contracts have ensured that its artists’ decision-making rights are preserved. Bang also told Harvard that Big Hit “wanted the group’s voices to come through in the lyrics.”

It’s no wonder that BTS members continue to hone their distinct musical styles, produce their own mixtapes and songs, and are always supporting each other. The boys are working on their very first self-produced album, which they said will be out in October.

Citing news reports, Harvard took note that training one talent alone could cost $100,000 a year. Bang said Big Hit’s system is “costlier and slower” because aside from training them to sing, candidates are taught “socialization, mental care, physical care” and undergo a mentorship program. All these, Bang said, inculcate in future idols “the qualities they need in their society.”

Last August, BTS went on a monthlong break. It was unheard of in the industry, and it was risky, what with a possible out of sight, out of mind reaction from fans. But Bang believed the boys needed to rest and recharge.

We surmise that this nurturing environment in Big Hit is what allows BTS’ artistry, authenticity and wit to flourish. This translates to exciting music and committed fans.

In June, BTS were among the influential names that delivered commencement speeches and performed on YouTube’s “Dear Class of 2020” virtual graduation, along with the Obamas and music celebrities.

Their “Bang Bang Con: The Live” had the largest paying audience for a livestream show during this pandemic. The band’s appearance on Carpool Karaoke with James Corden and Jimmy Fallon’s exclusive interview with them earlier this year continue to draw views and give birth to baby Armys.

We thought BTS remaining visible, releasing new songs and online content, was a good strategy during the pandemic, but professor Doobo Shim of the Shungshin Women’s University, Department of Media Communication, had a different take in an interview with Lifestyle: “I would think that is not a strategy, but rather an irony . . . because of the pandemic, some gain while others lose. This result was not expected from the beginning, though.”

The trust and collaboration between Big Hit and BTS are deeply ingrained and apparent in the boys, from their seeking advice when they are unsure of the content they’ll post on social media, to renegotiating their seven-year contract with the company.

BTS were already global superstars when their contracts were up for renegotiation in 2018. “We will give you seven more years, but give us the acknowledgement that we deserve for the successes that we have achieved, and reflect that in the contract,” Bang quoted the members as telling the company.

There were no details given on exactly what BTS meant by acknowledgement, but because the boys signed for another seven years with Big Hit, they apparently got what they believe they deserve. As for ARMY, there is no doubt this massive fandom is here to stay.—CONTRIBUTED INQ

A few BTS numbers, from the Harvard

Business School study and other sources

•Generated $130 million in merchandising sales in 2019

•BTS-related activities and sales accounted for $4.9 billion of South Korea’s GDP in 2018, according to the Hyundai Research Institute (HRI).

•BTS’ latest album, “Map of the Soul: 7,” became the bestselling album of 2020 worldwide after it had 4.02 million global preorders in February (and the album continues to sell amid the pandemic).•In June 2019, BTS filled London’s 90,000-seat Wembley Stadium in 90 minutes.

•In July 2020, with “Black Swan,” they broke Adele’s five-year record of having a song reach No. 1 in more than 100 countries on the iTunes chart.

•In 2019, BTS broke The Beatles’ record of hitting No. 1 on Billboard 200 with three different albums in one year.