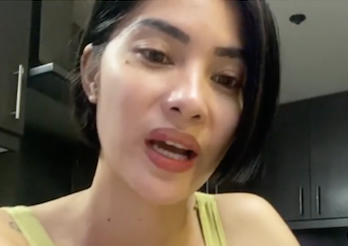 Starlet RR Enriquez showed her support for Janella Salvador who figured in another controversy with her former production assistant.

While throwing support for the Kapamilya actress, Enriquez  lambasted the hard-hitting radio host Raffy Tulfo and his show “Raffy Tulfo in Action.”

Salvador’s former production assistant Michelle Pelongco had complained to Tulfo about her allegedly unpaid salary amounting to P3,600, which is equivalent to Pelongco’s 12 days of service to the actress.

“I really don’t believe I have to defend myself because trial by media is not the appropriate venue for this. If you believe in your own lies and I really violated something, sue me,” Salvador dared Pelongco in her post.

“If you’re gonna twist the story in your desperate attempt to get money from me… sorry, hun. 3.6k is small and I would gladly give it to someone who deserves it. Not worth my time,” Salvador added.

(I believe it is not anyone’s responsibility to be answerable to Tulfo! This is why we have a lawyer and there is such a thing as hearing!!! We have our laws so we have to follow the right process. Tulfo is not the law!)

Enriquez also pointed out that despite Tulfo’s show being helpful, someone gets bashed in the process.

(Despite the show helping people, there’s one who gets humiliated (bullied on social media). Even if one is wrong, there is no need to involve the media just so the whole world will know and feast on and laugh at one’s mistake.  No matter how wrong a person is, he does not deserve to be put in that show.)

Enriquez believes that Tulfo’s show has become fodder to gossips.

(What’s sad is that it’s becoming a comedy show for many people, especially for gossipers and sadists. [Sadists because they enjoy seeing someone being humiliated.] If you’re affected, it is probably because you see yourself in this.)

Enriquez stressed that while there are really abusive people, it is not right to see them humiliated on air.

(Let’s say of course some people deserve to be put in that show because there are really abusive, but I believe that even if they may be wrong, they don’t deserve to be humiliated in that show. There are people who want to solve a problem sans camera. It is called privacy.)

“This is my opinion walang paki alaman (no one should care to object),” she intoned.  /ra

Janella Salvador opens up about depression after breakup with Elmo