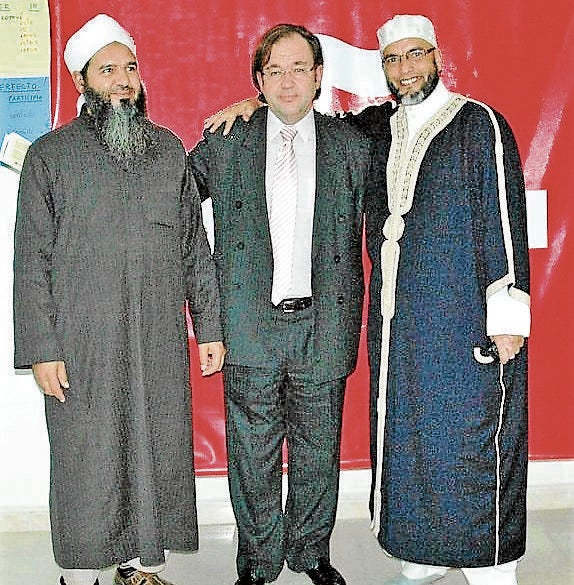 The author (center) with Ahmed Ounane and Cheikh Bagdadi Fizazi at Instituto Cervantes in Oran, Algeria.

“Imagine there’s no countries / “It isn’t hard to do / Nothing to kill or die for / And no religion, too / Imagine all the people living life in peace.”

Religion—what John Lennon referred to in the lyrics of the third most important song in history according to Rolling Stone magazine—has been the cause or a pretext for conflict between people. The creation of nations’ identities is in many cases linked to religion, and in many instances needed to create narratives of alterity and confrontation as well.

Since the rise of Islam in the 6th century AD, the confrontation between the three great religions of the Bible has practically been constant. Eight centuries of Spanish history must be understood in terms of Muslim-Christian dialectics.

Certainly, there have been eras and places with relative tolerance—frequently mythicized —between Muslims, Christians and Jews. In that long period known as the Reconquista, there have also been “unnatural” alliances between a Muslim king and a Christian king against another Muslim or Christian king. An example of this would be the case of Pedro I of Castilla and Mohammed V of Granada against Pedro IV of Aragón.

Muslim heritage has been highlighted in Spain in recent decades: administrative decentralization greatly facilitated this process in regions such as Andalucía, where heritage of Muslim origin is extraordinary. Institutions such as the Legado andalusi or the Fundación tres culturas have been instrumental in this enhancement. Likewise, they have also aided the discovery by many Spaniards of a great part of their history and heritage which they barely knew, or openly ignored.

The religious wars between Catholics and Protestants devastated Europe after the Lutheran Reformation for more than a century and a half. Closer to our time is the Northern Ireland conflict, and even more recent the one in Bosnia-Herzegovina where other factors apart from religion came together. Within Islam, the conflicts between the Sunni and the Shi’ite traditions have been a constant.

In the Philippines, a multicultural country, armed conflicts with a religious implication have also been a perpetual occurrence in its history, affecting the lives of many persons and their social and economic conditions.

For the Spanish Agency for International Development Cooperation (AECID by its Spanish acronym), assistance to the communities affected by these conflicts is a priority. In recent years the efforts of the Agency have been concentrated in projects in the south of the Archipelago, in the recently created Bangsamoro Autonomous Region in Muslim Mindanao.To a great measure, the conflicts are rooted in mutual lack of understanding. There is so much more that unite Christians and Muslims rather than separate them. One of the mottos of Instituto Cervantes for many years was “Spanish: A language for dialogue.”

Adhering to this motto, the Manila center of Instituto Cervantes, as well as the other centers of the Institution in the world especially those located in Muslim countries, aims to contribute to mutual understanding and promote dialogue, building bridges and exchange platforms between different cultures.

Ever since the outbreak of the new coronavirus disease pandemic, Instituto Cervantes de Manila, the cultural arm of the Spanish Embassy, has organized webinars every month on cultural aspects of special interest to the Filipino public, who have joined these activities directly or through social media on a wider scale.

On July 15 at 6 p.m., you may join the discussion “Interreligious Dialogue: Muslims and Christians in the Philippines,” through the Zoom platform. The link for the event (zoom.us/j/94121131561) may be accessed 15 minutes prior to the talk, which will be held in English with simultaneous translation in Spanish.

On this occasion, Instituto Cervantes invites Muss Lidasan, executive director of the Al Qalam Institute of Ateneo de Davao University and member of the Bangsamoro Transition Authority, and Ángel Calvo, Claretian priest and president of Peace Advocates Zamboanga Foundation, Inc. and of Zamboanga-Basilan Integrated Development Alliance. Both work tirelessly for dialogue and understanding between the communities of either religion.

The general coordinator of the AECID in the Philippines, Juan Pita, will resume the Agency’s efforts in Mindanao to contribute to the confidence in the peace process, focusing its works on the most vulnerable communities which were affected by armed conflicts.

Cardinal Cristóbal López Romero, archbishop of Rabat, will be sending his greetings from Morocco. The director of Instituto Cervantes will be moderating the discussion just like in the previous forums. The public will be able to ask questions by writing them to the event administrators.

Viewers who show proof of having attended the talk may request for a certificate of attendance. —CONTRIBUTED INQ

The author is the director of the Instituto Cervantes de Manila.