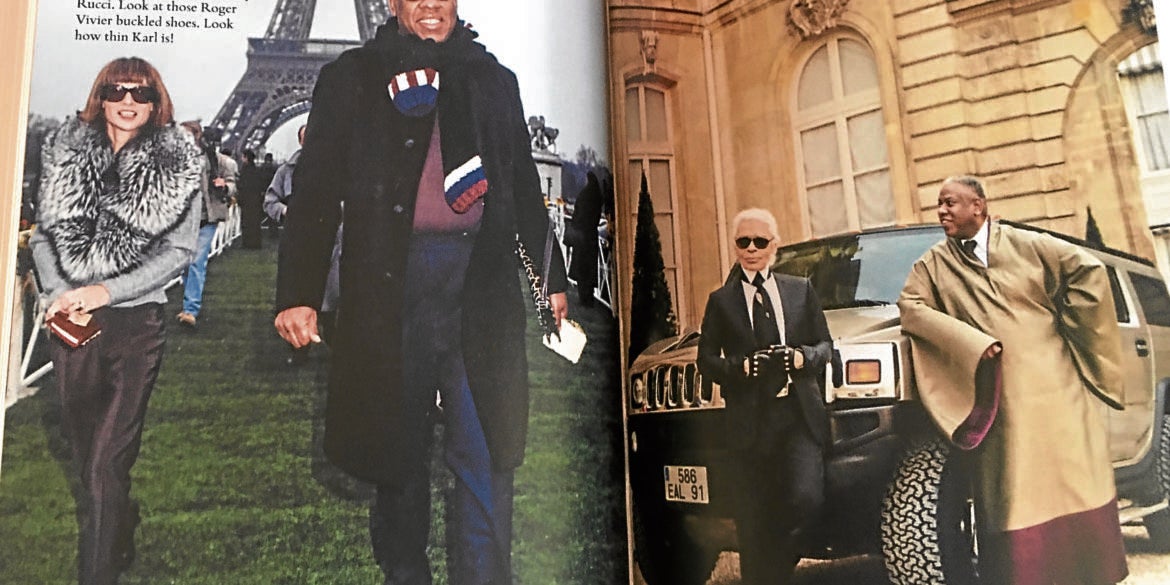 When André Leon Talley tells all

‘Anna (Wintour) should have had the decency and kindness to call me or send me an email . . . Simple human kindness’

In André Leon Talley’s first autobiography, “A. L. T.: A Memoir,” published in 2003, the erstwhile creative director of American Vogue was careful not to step on so many toes.

“I still had to bite my tongue about certain people, for fear of reprisal,” he writes in his new book, “The Chiffon Trenches: A Memoir” (Ballantine Books, New York, 2020, 304 pages), published in May.

Now 71 and seemingly with not much more to lose, Talley has clearly shed all restraint in this unhampered tell-all that some critics have characterized as vengeful, bitchy and bitter.

In early excerpts from the book, tabloids feasted—and justifiably so—on Talley’s rancorous account of his now-tattered friendship with Anna Wintour, his former longtime boss in Vogue.

“I have huge emotional and psychological scars from my friendship with this towering and influential woman,” he writes. “She has dashed so many on a frayed and tattered heap during her powerful rule.”

Wintour was sent an early galley of the book to ask if she wanted anything cut. Through official channels, he says, she merely asked to remove things relating to her children.

Talley says he was dismissed, without word, from the influential fashion magazine, where he was editor at large, a freelance post, in latter years. His name remains in the staff box as contributing editor.

“I had suddenly become too old, too overweight and too uncool, I imagine, for Anna Wintour,” he writes. “After decades of loyalty and friendship, and going through the peaks and valleys of the chiffon trenches together, Anna should have had the decency and kindness to call me or send me an email . . . Simple human kindness.”

Talley was born in Washington, DC, and raised and doted on by his domestic maid grandmother in Durham, North Carolina. The boy grew up devouring fashion magazines, which he says led to his becoming a Francophile.

He talks about being sexually abused as a boy, which seemed to have affected his ability to have meaningful romantic, and sexual, relationships as an adult.

In college, he majored in French and excelled at it. He would be offered a full scholarship for a master’s degree in an Ivy League school. He was working on his doctorate at Brown University, with plans of becoming a teacher, when he made affluent friends from the nearby Rhode Island School of Design. His flamboyant wardrobe caught their attention. His new friends would introduce him to the world of New York fashion. Talley would drop out of school.

“Back when I didn’t have money, I wore Bermuda shorts and knee socks for style statement,” he writes. When he grew big as he binge-ate through his depression in recent years, the formerly slim 6’7” man would trade his Savile Row suits for dramatic caftans made by designers like Tom Ford and Valentino, his signature look that many know today.

In New York, he met Diana Vreeland, when he worked as a volunteer for the Costume Institute (now Met) gala. The legendary Vogue editor took a liking to the young man. Vreeland would later write endorsement letters to his prospective employers whenever Talley needed a job.

Talley landed a “glorified receptionist” job at Andy Warhol’s Interview magazine, where he would be promoted to fashion writer.

In 1975, he met Karl Lagerfeld, when he Warhol tasked him to interview the then creative director of Chloe.

Lagerfeld seemed impressed by the younger man’s desire to learn that, on that first meeting, he called Talley to his hotel room, piled with Goyard trunks and suitcases, and pulled out his own bespoke crepe de chine shirts and gave them to him.

“We would stay friends for 40 years,” Talley writes. “Until we weren’t.”

And it is his retelling of his friendships such as this, other than that with Wintour, that makes “Chiffon” a delicious read. You come for the Wintour tattle, but stay for the saga. Talley was in the front row, and behind the seams, of high fashion history, in the bygone years of excess and Vogue expense accounts.

(Talley recalls going to Halston’s house, where he “sniffed a hefty line or two, to be polite.” He also writes about “naughty” Warhol, who often grabbed the young Black man’s crotch, but “always in public.” He also devotes a chapter to his “best friend” Lee Radziwill, but it almost sounds gratuitous and doesn’t quite jell with the whole fashion narrative.)

Lagerfeld would become like a big brother to Talley, with whom he exchanged handwritten letters almost daily and would have marathon phone calls back in the day. And it is this friendship with Lagerfeld that would make his job secure at Vogue, he writes. It gave Talley gravitas and a level of importance.

Their friendship, says Talley, baffled others. What could Lagerfeld possibly see in him?

Lagerfeld was incredibly generous to Talley. Again, until he wasn’t. The legendary designer, who designed Chanel from 1982 until his death in 2019, was generous to many, but it had to come from his own volition. You ask for something, and you got cut.

Lagerfeld had a pattern of dismissing people he loved, says Talley. A few years before the designer died, Talley would find himself unceremoniously cut off by his bosom friend, removed from Chanel’s runway show guest list and Christmas gift list.

From Interview, Talley moved to WWD, then the fashion bible, to work under John Fairchild, also then the “Anna Wintour,” who could make or break careers of designers.

As WWD’s fashion accessories editor (and later Paris editor, and Europe fashion editor of WWD and W), Talley dove deep into fashion coverage. Fairchild taught him to analyze “the beat and rhythms of fashion,” who wore them and why.

His first big show was the haute couture collection of Yves Saint Laurent, Lagerfeld’s erstwhile friend and rival, both in career and love (they fought over Lagerfeld’s boyfriend, Jacques de Bascher, a French aristocrat).

Talley’s review would earn him the affection of YSL and Parisians. That’s until he wrote an also glowing review of Hubert de Givenchy’s couture collection, featuring all-Black models.

A YSL publicist was said to have called the Black editor “Queen Kong.” Then rumors started that Talley was stealing designs to give to Givenchy, which he denies. Talley calls it racism, a topic that was never talked about in Paris at the time, but was always simmering beneath the surface.

(Talley also writes of how YSL, in a letter, eviscerated Tom Ford, who was then designing YSL, for ruining his life’s work.)

In 1983, he would start working as Vogue fashion news editor under Grace Mirabella. Wintour was creative director. Talley and the British Anna would become fast friends, and his star rose alongside hers.

When Wintour finally took the helm of US Vogue in 1988, she named Talley creative director, making him the “highest-ranking Black man in the history of fashion journalism.” He would keep that achievement until Edward Enninful became editor of British Vogue 30 years later.

Talley provides intimate insights on the woman characterized widely as cold and calculating. Wintour was an often generous, and at times caring, friend, he says. She staged an intervention when his weight gain was spiraling out of control and she arranged, and paid, for him to go to a clinic.

He would witness important private moments in Wintour’s life, including her wedding in 1984, where she handed him the bouquet. He was present in all her couture fittings, giving his opinions, even up to the years when their relationship had become fraught, out of “a sense of duty.”

He was present at her daughter Bee Shaffer’s dress fitting for her 2018 wedding, which he chose not to attend, again out of a sense of duty. Later that year, a day after his 70th birthday, he was again at Wintour’s couture fitting; she didn’t greet him on his birthday. On her 69th birthday the following month, he sent her an email. She didn’t reply.

Wintour relied on her editors for opinions on collections, says Talley. “Perhaps she was not exactly secure in choosing clothes for the magazine.” However, he says she was brilliant at making quick decisions. “But she was never really passionate about clothes. Power was her passion . . . ”

There was never a big blowup or argument between them, because Wintour didn’t argue, he says. He felt she started to sideline him at Vogue, taking him off important duties. While other editors got curatorship jobs for Met Gala shows, Talley couldn’t.

“That hurt,” he says. “She had put me in a box and apparently decided there was no bigger job in the works for me . . . It started becoming clear I’d hit a glass ceiling at Vogue.”

Talley seems to suggest Wintour got official credit for saving the career of a young and gifted but broke John Galliano, when it was Talley who was on the ground who did all the dirty work.

Her “last sincere” words to him was written on a used The Ritz Paris envelop, after she received France’s Legion d’Honneur in 2011, thanking him for helping her. He was at her Chanel fitting, and he carried her purse throughout the ceremony.

Talley had kept that note, and sent it to his framers, who threw it away thinking it was trash.

A fitting end to a friendship that, by his own account was, perhaps, garbage.