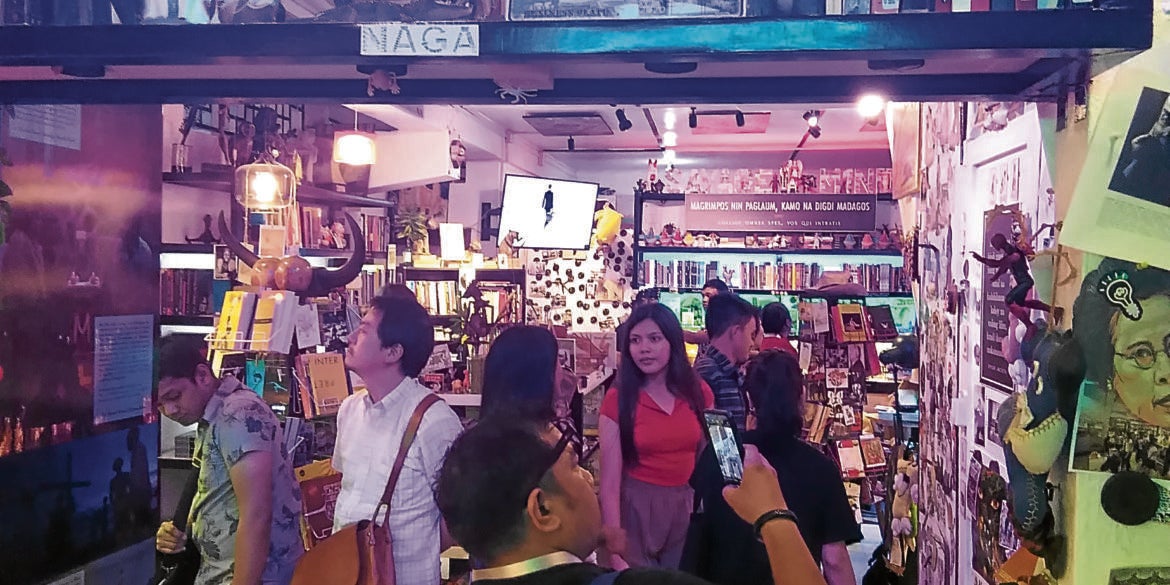 Savage Mind bookshop is the creative heart of Naga City

Piolo Pascual will be reading three poems in the Aug. 1 edition of the ‘Himati’ video poetry readings from Kristian Sendon Cordero’s innovative independent bookstore in Bicol

A bookshop can exemplify the intelligence and the passion of a city. This was what Kristian Sendon Cordero realized when the award-winning writer was a fellow at the prestigious International Writing Program at Iowa University. It was there that he would discover Prairie Lights and Books and Café, where he would meet other students and fellows during readings and conversations.

“I was so inspired with that particular experience,” he said. “The bookshop is so much part of the life of the university and the city.” When he continued his writing residency in Sitka, Alaska, Cordero had the same experience at another bookshop: “I felt a certain kind of connection to these places. It’s always like finding yourself in the right place, with the right people, in a perfect moment.”

After returning to his native Naga City in 2018 after another artist residency at the University of Michigan at Ann Arbor, Cordero, the deputy director of Ateneo de Naga University Press, decided to turn his realization into reality with the money he had saved up and the help of New York-based poet Luis Cabalquinto, who defrayed some of the costs for the property owned by the Lirag family with a house over half a century old.

As for the bookshop’s name the ex-seminarian thought: “I liked the idea of putting the words ‘savage’ and ‘mind’ together,” he said. “When we think of the mind, we immediately think of reason, of logic, or order, but that is not the case always or that is not the case at all. Surely, the mind is also the site of our irrationalities and irregularities, which for me are the greater sources of our creative powers.”

There was a good reason for putting up such an independent bookshop here. “Naga is known for being the center of education and culture in the Bicol region,” Cordero explained. “The capital of the Catholic Church in this part of the world is here and lately we have entered into the national political imagination, but unfortunately in our recent history, there is no independent bookshop and a cultural hub that works according to the way we envisioned it, so we decided to put up Savage Mind with the hope that people will get a new experience of relating with books.”

In and on Bicol

Savage Mind’s available space is of course filled with books from commercial presses, university presses, independent publishers and self-published writers. Savage Mind features the country’s most exhaustive collection of books in Bikol and on Bicol.

“Almost all Bikol books are here, from contemporary novels to novenas, from contemporary poetry to prognosticos, or dream guides,” he said. “You will see a special section dedicated to the works of Bikol writers Luis Cabalquinto, Merlinda Bobis and Ricky Lee.” There are books collecting the works of the National Artists for Literature, of queer literature, about martial law, for children and young adult sections, and in other Philippine languages such as Hiligaynon, Waray, Ilokano and Sebwano. “Savage Mind wants to celebrate the multitude of melodies in our languages and cultures,” Cordero explained. “This is a Philippine reality that we must be proud of.”

There’s also a secondhand book section called the Sari-sari section and a shelf devoted the writers who have won the Nobel Prize for Literature.

The shop’s name may say art, books and cinema, but there is a lot more waiting to be found in Savage Mind. There is vintage Bicolaniana, “baby saints” and found items. There are stuffed toys based on local myths and legends, a Bakunawa neck pillow and a manananggal USB thumb drive. Among Savage Mind’s bestselling items is a figurine of Antoine de Saint-Exupery’s “The Little Prince,” sold beside English and Bikol translations of the book. Hanging on the walls are paintings by Bikolano artists such as Boyet Abrenica, Fr. Nunilon Bancaso, Rox Lee and Frank Penones Jr.

If you’re hungry, Cordero’s business partner, filmmaker Randy Dagooc, runs the café. Cordero is very proud of the bottled sili (pepper) beer from his craft brewer friend Dexter Adoremos. “Eventually, we will create our own Savage Mind Beer, and design a special nook here where people can have some books and booze,” he said. Believe it or not, Cordero actually lives in Savage Mind so he can manage it with devotion. He literally wakes up, walks out of his room and is in the shop.

Prior to the new coronavirus disease (COVID-19) crisis, Savage Mind did everything from organizing book launchings, art exhibits, film screenings and public readings.

Now, the shop is open from 3 to 7 p.m. on weekdays but the majority of Savage Mind’s business is currently done online. Cordero said. The Savage Mind staff prepare the online orders in the mornings and have them picked up by the couriers, before opening at 3 p.m. If there are no customers yet, they literally tend to the property’s small garden that is actually called (what else) the Savage Garden.

The creatively indefatigable Cordero has loosened many a project from Savage Mind’s premises, but the one he has been working on most recently combined many of the elements that embody the shop’s personality.

“Himati” (it means “feeling”) is a series of readings conceptualized by Cordero and film critic Tito Valiente that originally was meant to have poems by Bikol writers being read by Bikol actor Jaime Fabregas with the videos being uploaded; the first three writers featured were Cabalquinto, Luis Dato and Marne Kilates. Originally intended to be just a three-episode thing, “Himati” now features readers who are not Bikol and non-Bikol writers including an Argentinian actor reading Borges in the original Spanish.

The most mainstream of these readings is coming up on Aug. 1, when “Himati” will feature actor Piolo Pascual reading the work of Filipino writers Michael Coroza, Alwyn Javier and Mesandel Arguelles in commemoration of the Pambansang Buwan ng Wika. “We never thought that Piolo Pascual will say yes to this project,” Cordero admitted. “We were looking for some big star to at least culminate this project because we agree that our last episode should be as memorable as the first performance of Jaime Fabregas (for the videos please see the Facebook and YouTube links below).” Beyond “Himati,” Savage Mind has contests and publishing plans afoot.

The building itself will receive some work as well. “We are busy doing our exteriors, we plan to do some murals,” he said. “Expansion has to wait for another three years because of COVID-19, but we will continue to see how things will shape up next year.”

Cordero has projects of his own away from the shop: “I am finishing the Bikol translation of ‘Noli Me Tangere’ and ‘El Filibusterismo.’” He hopes to continue a film project that got derailed by the pandemic.

All this emphasizes that Cordero had always intended for Savage Mind to be a community hub in Naga City, a creative heart of sorts. This is what an independent bookstore can be for a city.

Cordero acknowledges that like other big cities, Naga City is ever changing and becoming more urbanized, but he imagined Savage Mind to be a place where one can experience a much-needed change of pace.

“Independent bookshops can be a reminder for us to slow down, to take solace, and to secretly enjoy the pleasure of the printed word, the imagined sound made meaningfully beautiful,” he said. “And from this physical space, to the printed word and bounded pages, one slowly builds a new space, a better city perhaps, in one’s memories, in one’s savage mind.” INQ