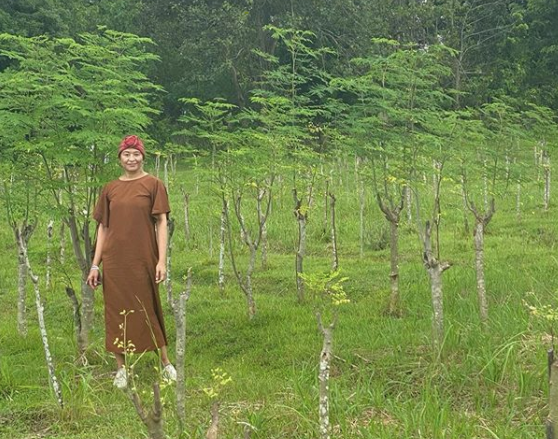 After announcing that she got the boot, veteran broadcast journalist and former “Bandila” news anchor Ces Oreña-Drilon is now devoting her precious time to another endeavor —farming.

“This was one of the toughest days I had to face. Telling fellow kapamilyas that they would lose their jobs by end of August. I lost mine too,” she said on her official Twitter account, @cesdrilon on July 16. Drilon’s announcement came six days after her home network ABS-CBN was denied its franchise renewal by the Congress in a vote, 70-11.

But she is moving forward. Drilon posted a series of photos taken at Vagabond Farm in Batangas on her Instagram account, July 21, showing her latest activities.

“Farmer Ces at @vagabondfarms. Am really excited to devote more time to farming,” she said. “Photo 1 is me amongst our malunggay trees. We are transferring them to the perimeter fence to plant dayap and avocado. Photo 2 is the tree house behind me. The @shopstylecat head wrap perfect for a day at the farm!”

Her series of photos also showed more of the farming scenery, such as “one of the farm’s tree lined paths,” a “perimeter fence which will be lined with more kakawate and malunggay trees,” a “kamagong tree, now about 3 years old,” and even a “pile of cow manure to start a worm farm.”

“Watch out for @vagabondfarms ‘potting mix!’” she teased.

Drilon disclosed that “[farming] was the plan until [ABS-CBN] plucked me out of ‘retirement’ from field reporting.”

“Now it’s time to give it more focus as life has once again led me to a new journey. But I will always be #foreverkapamilya,” she said.

Drilon has come full circle as a broadcast journalist, appearing as news anchor for “Bandila”, “The World Tonight” and “TV Patrol”, before becoming one of the heads of the ABS-CBN Lifestyle Ecosystem Group. JB

Erik Matti on filmmaking, COVID-19 and the ‘new normal’: ‘We must change ‘coz the world changed’