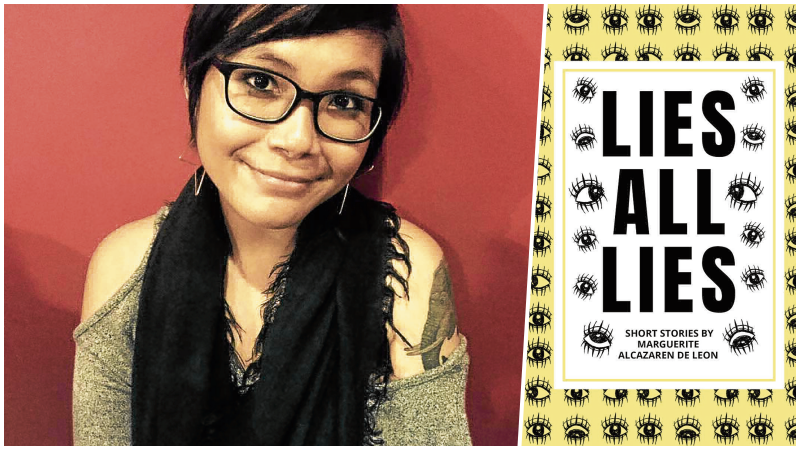 Undead senator attends a debate, a religious rocket-ship mechanic gets into trouble and a dog appears to have a rapport with a president-elect in this provocative and polished short-story collection from the author of 2014’s ‘People in Panic’

Would it ever be fair to judge how good a short story is by how good the title is? However, this applies snugly to the 11 stories in Marguerite Alcazaren de Leon’s second short-story collection, “Lies All Lies: Short Stories” (self-published, Pasig City, 2020, 120 pages). After all, every single story’s title sounds like it would make for a really cool name for a rock band.

Rappler’s opinion editor by day and fictionist by night, De Leon’s 2014 debut collection “People in Panic” may have been her first book, but the 11 stories in that book had been written over a long period of time and as such were ripe for reading; well-written, very precise pieces of fiction.

That is even truer for “Lies All Lies.” Written over the last five years, the stories, spare and spacious, anxious and illuminated, take a provocative premise and then conclude with an ending so sharp they will break the reader’s skin. The stories take their time to get there and then turn almost right at the last period and it’s impossible to review these stories in depth without spoiling them.

This is true even for the more conventional ones, which for the most part deal with nameless protagonists on an odyssey for some kind of redemption or atonement.

“The Wat” is a short short following a girl three months after being discharged from psychiatric care and now visiting Wat Phu Kao Thong in Thailand. “Pilgrimage to the Ballpen Boy” features another nameless female protagonist, troubled by recent events, carrying what she hopes will make a difference to a boy she saw on TV who used sticks to write to study because he didn’t have money for ballpens. It doesn’t go the way she expects it at any point. “Impulse Buy” chronicles a mother named Jocelyn’s fraught relationship with her son she was displacing through online window shopping. “Danger Man” is a portrait of a well-intentioned young marriage brought to a crossroads at a Novaliches perya.

“State of the Art” explores the soul-searching of an aging award-winning artist named Zak de Laza as he alternately receives a prize and is preparing an effigy of the president to be burned at a protest. His interactions with a hipster artist named CRZNT provide a hilarious counterpoint.

The remaining stories are subversive in different levels of subtlety. Some of them involve minimum doses of speculative fiction used to maximum effect.

“The Last Living Pick-up Artist” is exactly what it sounds like. It presents a near and/or alternate future where pick-up artists have gone extinct, with the last living example presented on display. His name is Jaguar, and like the other stories in “Lies All Lies,” this one explains how things came to be this way without overdoing it.

“Dietary Restrictions for the San Diego Death Party” is an email of instructions to the Aggrieved Party Catering company for the wake of one Ryan San Diego, who had died when his barbell fell after his spotter sneezed during a workout. This story is the most outwardly ironic as De Leon summarizes each relationship the deceased had with his guests through their individualized dietary request, something made more complicated by the fact that the decedent was in a group marriage.

Imagine then a future when the same-day edit is in itself the legal equivalent of a wedding instead of a wedding ceremony. That is the premise behind “On the 30th Anniversary of Mark and Gela’s Same-day Edit,” where the titular couple is celebrating their 30th wedding anniversary and their children, all kind of damaged, giving them a renewal edit. “Will you do a same-day edit with me,” Mark asks Gela in the memory. But marriages and family—even this ultra-modern family—isn’t as easy as making video software work. “I Think my Dog Is Pro-Du30” is partly autobiographical and partly something else entirely. The first-person narrator is a journalist caught up in the events of the 2016 presidential elections when she suspects, with growing trepidation and heartbreak, her beloved dog Princess may have some kind of telepathic or emotional resonance with then-president-elect Rodrigo Duterte.

The current context of the last-mentioned story and the next one adds agency to them. “The Jesus Rocket” is the first story in the collection, and De Leon starts “Lies All Lies” off with a figurative bang, taking the faith conventions of the Iglesia ni Kristo and turning it into a noir-ish mystery. Nestor, the mechanic in charge of the titular rocket-ship’s furnace gets caught in a dilemma when the scheduled launch for the Place Beyond is delayed by a year and he starts to panic.

De Leon has saved the best for last. Not only is “Zombie Raul Roco” the best name for a fictional rock band in the collection, but this story is also the pièce de résistance of “Lies All Lies.” At the live televised debate between four presidential candidates, the dead Roco somehow shows up and proceeds to join in. “Raul Roco, the senator recalled, was a rabid environmentalist, and now may also literally be rabid.” He then proceeds to terrify his opponents and yet win the crowd over despite being undead. De Leon describes a pretty accurate description of what her titular character would look like after rising from the dead, down to the tattered gumamela short-sleeved shirt and decaying skin. She even uses actual Roco quotes during the debate. It’s a pitch-perfect, bravado display of horror and humor that simply has to be read to be believed.

The truth is that Marguerite Alzacaren de Leon can take all the time she wants between books. Every story in “Lies All Lies” deserves to be absorbed by itself, adding up to a bizarrely brilliant whole. INQAvailable in paperback.