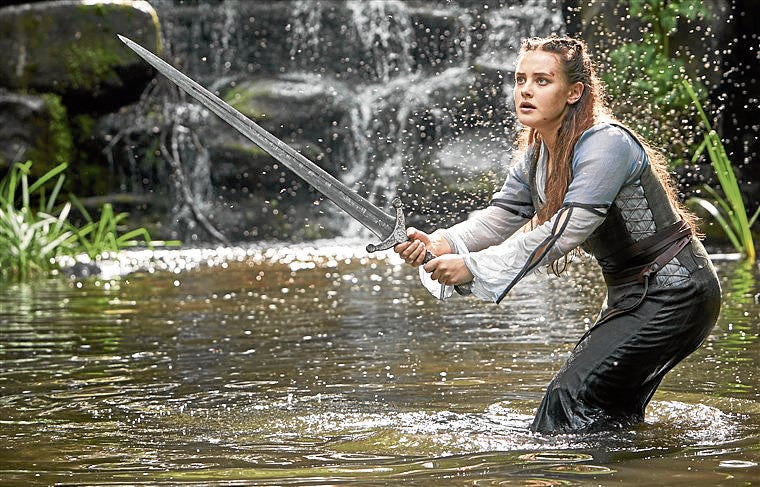 Based on the graphic novel of the same name, “Cursed” is a Netflix series from Frank Miller and Tom Wheeler that reimagines the story of King Arthur from the perspective of the Lady of the Lake.

Immediately, it’s clear that the series has no central focus. Its premise is King Arthur’s story told from a different perspective, but the new main character Nimue (Katherine Langford) is hardly fleshed out, as the series doesn’t truly revolve around her. While she and the central MacGuffin that is the Sword of Power are integral to the plot and motivate it forward, most of the show’s plot lines are from a worldly perspective and not her own. The show begins with her, then uses the encounters she has on her journey as springboards to follow new characters, and continue to expand until Nimue is relegated to just one of the ensemble, where she doesn’t fare well in terms of most interesting characters.

It’s the vast scope of the ensemble and the world that contributes heavily to the series’ failings. There is no effective storyline, because there is no singular focus. For most of its 10-episode arc, it can’t decide whether it’s a story about Nimue coming into her own while carrying the burden of the Sword of Power, the origins of King Arthur characters, the political arena of the divided kingdom, or even simply just medieval knights and magic.

The series put the cart before the horse, in how it developed its world. There was no main story that grounded all the world building and the characters established. It merely starts off with Nimue, then quickly gets distracted by the world of King Arthur around her. The plot barely gets to establish Nimue, before suddenly becoming a “Game of Thrones”-esque War of the Five Kings situation.

Because the series takes on too much in expanding the world and setting up major characters, it often rushes through its storylines. Nimue, being the main protagonist, is the prime example of this. She goes from a bullied outcast of a small village to the queen of her entire race within a brisk 10 episodes.

It’s also evident in the rest of the ensemble, who aren’t so much “people” as characters who exist in the story to hit their plot points. To be fair, the characters do hit the plot points along their arcs (whether it be a redemption arc, revenge arc, etc.—the series has most of the archetypes), but that’s all they exist to do. The characters don’t go through anything else other than a checklist of what they’re supposed to go through as archetypes. There are no “in between” moments where the characters can just exist, live and breathe in the world, because there are about a dozen other characters who also need screen time to be “fleshed out.”

These moments being rushed through just makes the world feel shallow and fabricated. With characters who just pop up in different areas of the map every episode, the world feels increasingly smaller. There’s also a later development wherein Nimue and her forces capture a town so that her people can take refuge. The story unsurprisingly doesn’t depict the racial tensions between Nimue’s people and the townsfolk from any perspective other than Nimue’s. There are a couple scenes where Nimue has to deal with it, but it’s ultimately pushed aside to deal with the larger plot. It’s definitely a missed opportunity to show who Nimue is outside of the plot, as a ruler.

It’s unsurprising, for the series is full of missed opportunities such as that. It’s a scattershot image of a world that’s barely developed because it’s never lived in, which is a shame, for a lot of the set pieces are well built.

“Cursed” ultimately falls incredibly short of being worthy young-adult, high fantasy content. It’s not even unfortunate, for it’s not like the series was even attempting to be original or interesting in the first place. —CONTRIBUTED