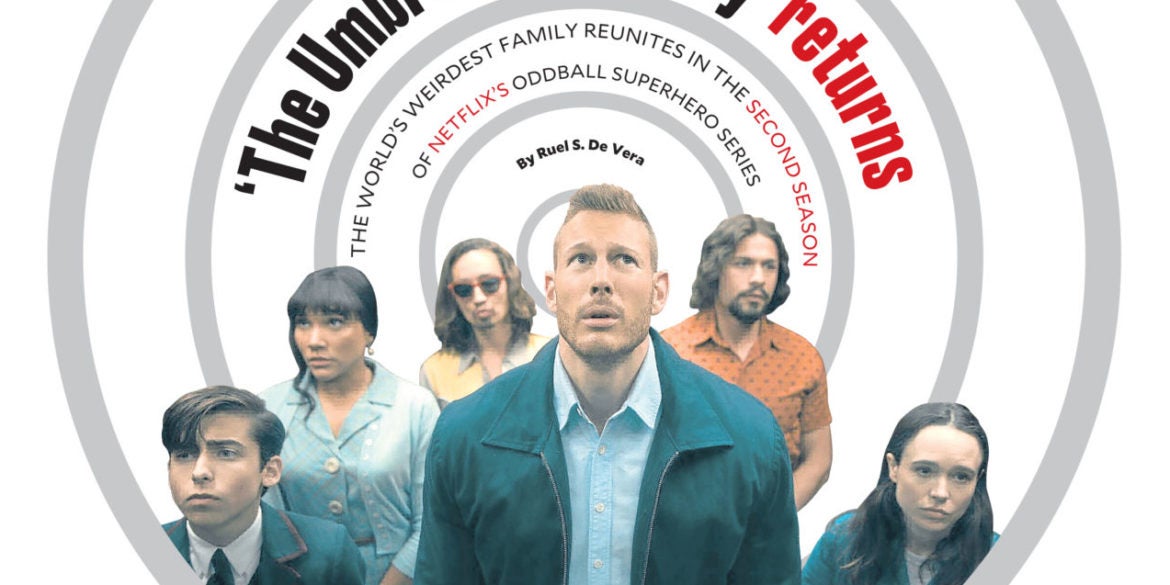 What has happened to the most dysfunctional superpowered family of all?

At the end of the first season of Netflix’s “The Umbrella Academy,” the Hargreeveses had saved Vanya (Ellen Page) but were about to be wiped out by a worldwide firestorm when Number Five (Aidan Gallagher) time traveled them to who knows where.

We find out all that at the beginning of Season 2 of “The Umbrella Academy,” but it isn’t what you expect at all.

The Hargreeveses are indeed alive (well, most of them) but are scattered all over the early 1960s by themselves and have to pick up their own lives.

Luther (Tom Hopper) becomes a bouncer for a shady underworld figure, Allison (Emmy Raver-Lampman) becomes a wife, Diego (David Casteñeda) has been committed to an asylum for the mentally disturbed, Klaus (Robert Sheehan) becomes a leader of a cult with ethereal Ben (Justin H. Min, still in ectoplasmic tow) and Vanya, suffering from amnesia, finds herself with a quiet family, seemingly with the kind of life she’s always wanted.

So where is the time traveling Number Five?

He finds out that, unless he puts the family back together, another Armageddon is coming their way, and only their combined abilities will be able to prevent the event that triggers the whole thing in Dallas, Texas.

Most people know Gerard Way as the flamboyant frontman for the band My Chemical Romance. Way is also a lifelong comic book fan and stunned many when he created and wrote the critically acclaimed original six-issue miniseries “The Umbrella Academy” for Dark Horse Comics in 2007.

The showrunner Steve Blackman returns, but makes some substantial changes to the source material, the second volume of the comic book, “The Umbrella Academy: Dallas.”

“What happened in Season 2 was that I really love the storytelling around the JFK, the John F. Kennedy assassination. And one of the conceits of the show is that it’s only 10 days of time. The graphic novel of Dallas really spanned different places and times so I really wanted to choose one period where I really could tell a story that was linear that happened in 10 days. That’s why it’s different.”

Way was, of course, heavily consulted on the changes made to the story. Page knows Vanya has the most difficult arc, one of both atonement and forgiveness.

“At the end of the season, she releases a lot of repressed anger and traumatic experiences and it’s unfortunate for the world because she blows up,” she tells Super. “But where we see her at the beginning of the second season there’s much more of a lightness, she’s able to access emotion, connect with people, she falls in love for the first time, so you know she is different in her body and her spirit and all of these things. And then of course, at a certain point, as we see, she does have to come to terms with so much again which is obviously incredibly painful. She’s lucky to have these really supportive, loving, siblings who are compassionate and really want to get past the fact that she’s done some pretty awful things.”

In the past, Raver-Lampman has the most to give up, as she already has a family. “Yeah, I mean it’s quite devastating,” she said. “I mean, they all have their fear, but Allison, especially the first time that they jumped, she potentially lost her daughter. I think she has found some peace in assuming that Claire still exists, where they came from.”

Hopper’s Luther for the first time, is no longer Number One, and he is OK with that—in a way. “Well, I actually think that he’s let go of the whole Number One element of it for him. He’s gotten over the whole idea that he’s a leader,” Hopper said. “He, in a lot of ways, he just wants to help the family again and play his role. He’s quite happy for anyone else to take over eventually. He is a protector and I think the biggest thing I had to do was let go of self-importance issues because that was actually his biggest downfall.”

Sheehan’s Klaus is already the craziest character in the first season (he is the Séance and can see dead people) and now he’s gone to the next level as a cult leader. But for Sheehan it’s all about not going overboard.

“Just don’t be looking for the crazy or else… just try and play it truthfully. Let the writing do the work, you know, because the scenarios are crazy enough. Rather than add an extra layer of crazy icing on top, you know?”

Castañeda now pays a price for his vigilante activities and gets thrown in the asylum where he now has to escape with the help of Lila (Ritu Arya). This leads to some pretty goofy adventures completely unexpected of the dangerous knife-wielding Diego. “You know, there was no difference,” Castañeda says. “I think all of it was just more of the writing. It goes back to not trying to be funny because I didn’t know I was funny. And I still don’t think so. I’m playing it very honest, that was the most important thing. It wasn’t until you start seeing stuff that you go, oh shit, that was actually funny.”

As for Min (quite dead so only Klaus can see him), he is happy to be the “unlocked” character and he was in the poster and the promotion though he still spends most (but not all) his scenes with Sheehan. The Korean-American actor had this to say: “First of all, I love Robert Sheehan. But, but it was nice to finally speak to another sibling. I think before we started shooting, I just hugged Ellen. I said, ‘It’s so nice to speak to you finally.’ And yeah, it’s a very emotional and touching scene. And I thought that it was going to be one of my last. So it was a really sad moment for me. But it was really great.”

Which brings us to the 16-year-old Gallagher (incidentally the youngest person in the cast), who is the most pivotal character in the season. Even though Number Five is the youngest, he has the most life experience through his time hopping. It will be up to him to bring the Hargreeveses back together. “Five has a cunning mind that always seems to be preoccupied with the threat of an impending doomsday. He struggles to hold back his own insanity, is constantly taunted by his more cruel and murderous impulses, and is nearly twice the age of the rest of the siblings,” Gallagher said via email. “Whenever I approach a scene I have to keep all of this in mind.” He adds a big change in the new season: “A really interesting choice that Steve Blackman and the writers made was to flip the dynamic for Number Five. In Season 1 he is not very inclusive and feels that he needs to do everything himself. By the end of that season he realizes he needs his family’s help. For Season 2 however, Five goes to his family for help and is systematically rejected by each one of them. There’s a sense of abandonment and vulnerability to him in relation to his siblings that we haven’t necessarily seen before.”

Music is of course a big part of “The Umbrella Academy,” and Blackman is ready for you: “I always say that music is another character of the show. We really love music and sometimes I pick a song that I think fits a scene and sometimes it’s a counterpoint to a scene.”

Part of that was shooting a quarantine version of the famous “I Think We’re Alone Now” dance number by the family members in their homes (including Min this time) just so Blackman thought the fans would have something to look forward to before the first trailer came out.

There are many new mysteries in “The Umbrella Academy” Season 2, including many that harken back to questions from Season 1, including characters and plot points—what do you expect from a time travel/extinction-level event show?

For Page, “The Umbrella Academy” Season 2 is about putting the family—including her prodigal, dangerous Vanya—back together. “For sure, I mean I think it was the world to her,” she said. “Absolutely. Obviously as a child she was treated awful by everyone. Her father, the kids as well, encouraged her to be treated badly to repress her power, so I think yeah, it absolutely means the world to me. it was just so fantastic in that scene that Vanya realizes she’s not alone and is very much life-changing.” Blackman says “The Umbrella Academy” Season 2 will surprise and engage even those fans who thought they had figured out the secrets of the season as well as those who had read the comics. “I think what they can look forward to is, you know, seeing our family back together, and all this sort of unique challenges that come with being back together,” he says. “Plus, we have a whole new bunch of bad guys, we have the, you know, doomsday and the end of the world coming. So it’s not going to be an easy 10 days for the Umbrella Academy. And of course we have a wonderful ending that I think will leave them on the edge of their seats.”

It is important to note that there is actually a third volume of the comic book by Way and Gabriel Ba: “The Umbrella Academy: Hotel Oblivion.” Will we be seeing this one on screen too? “Of course, I’d love to add to Season 3,” Blackman says. “You know ‘Hotel Oblivion.’ You know, I have a plan for Season 3 if Netflix is kind enough to consider a season. I really love what Gerard and Gabriel did with that new graphic novel. So I will say that you probably could see some things from there. Absolutely. We’re hoping to get to Season 3. We’ll see how we do in Season 2.” Sounds like a plan.