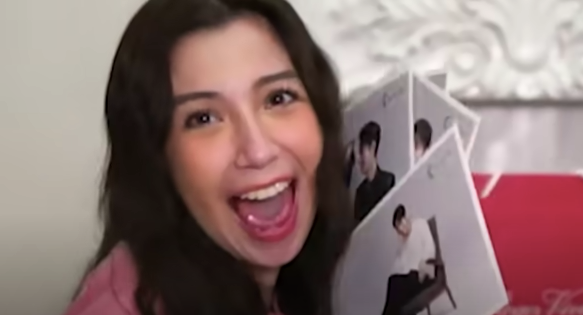 Celebrity vlogger Donnalyn Bartolome could not contain her excitement when she received a birthday gift which included images of the Korean superstar Lee Min-ho.

Bartolome, who celebrated her birthday on July 9, unboxed her gifts and showed them to her Youtube fans on July 30, in a post titled “GIFTS I GOT FOR MY BIRTHDAY (Lee Min Ho sent me a gift!?).”

“Unboxing the gifts I got for my birthday! Thank you to all the thoughtful people behind the feeling I feel now. You are the real gift to me,” she said.

Bartolome decided to open her gifts from smallest to biggest as suggested by a friend who was there during her unboxing.

She first opened a Gucci box containing a pair of earrings which she immediately tried on.

She almost screamed when she opened a box containing an airpod, this being the first time she had one.

“Bakit may music? (Why is there music?) I got so sacred,” she exclaimed when she tried it.

Bartolome received an iPhone as well and marvelled at its capability of receiving files from her old iPhone unit.

“We just put it right next to my old phone and it [synced] everything, even the photos got transferred. Even my passwords, the passwords to my social media accounts, everything, like I don’t need to log in. This thing just made it easy for [me] to transfer phones ‘coz I hate transferring,” she explained.

Bartolome also received the following gifts: a make-up set, an earphone, meteor microphone, Donna Funko Pops and ten little Donna Funko pop keychains, a mini ref, Jo Malone and Ferragamo perfumes, a Prada bag, skin care products, a face mask, a teddy bear, a jacket with her face on it, an explosion box, shorts and pants, a gold doorknob, and many more.

“Guys it’s from Lee Mi-ho. Oh, my God,” she said. She then showed photos of the Korean actor included in the parcel.

Opening the box, she showed that it has a Cellreturn tag from South Korea. It turned out that it is an LED mask which changes color when charged.

“I’m gonna test this out and do another vlog so watch out for that,” she said. “Thank you, Lee Min Ho. Sarangheyo (I love you).” JB