How do you leave kids their individual spaces, while helping them fight boredom? | Inquirer Lifestyle ❮ ❯ 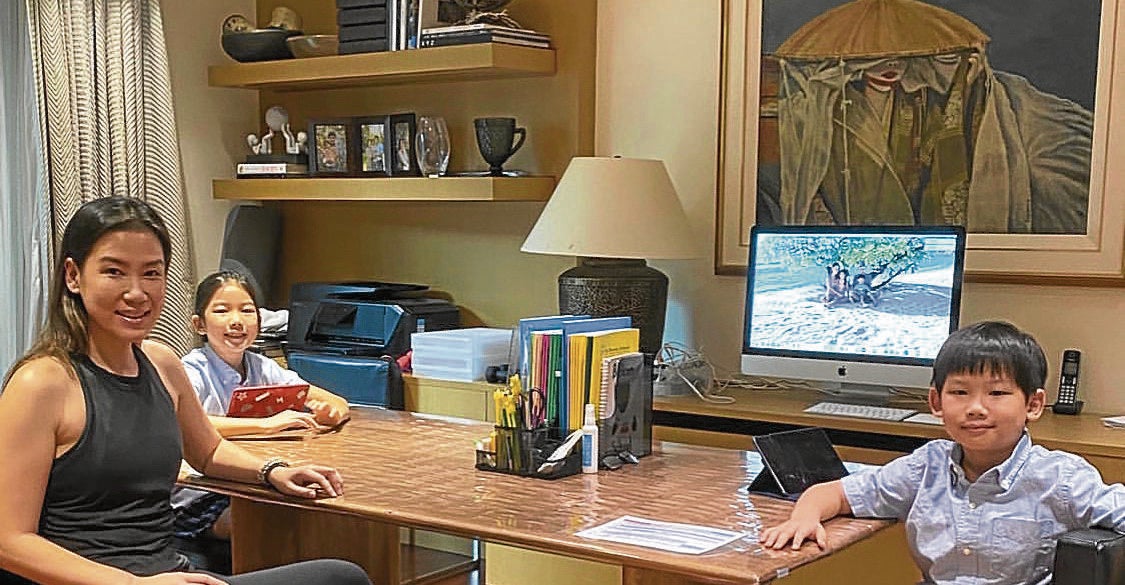 Kathy Huang with Kenzie and Kameron at the start of classes: “They’re responsible for their actions, but Mike and I will be here to help.”

How do you leave kids their individual spaces, while helping them fight boredom?

‘They can do whatever they want, but they have to deal with consequences’

Different strokes for different folks—there’s no single rule for parenting during the prolonged quarantine, just like there’s never been in normal times.

As the sharing of these parents shows, the challenge is how to balance structure and discipline with freedom and creativity. How do you leave your kids their individual spaces, while helping them fight boredom?

But most important is the time shared between parents and kids.

Wife of Michael Huang and mother to Kenzie and Kameron:

They make their own decisions

The kids struggled in the beginning because of boredom and missing their friends. I really can’t take much credit for anything because my daughter Kenzie just wanted to try out baking. It started with a box mix I got in the supermarket, as I am completely useless in the kitchen. From there she’s been the one finding recipes online, and suggested selling the goodies. Her business has taken on a life of its own.

Kameron has been keeping busy with building Legos, and recently asked if he could learn to play the piano. He would see me practicing and I suppose it piqued his interest. He likes it a lot so he just goes and tinkers on the piano every day.

No program in mind. We have a schedule now, since school has started. But over the summer, I didn’t want to force anything, as everyone was just trying to figure out life in a pandemic. Yes, I’m a pretty involved mom. But that doesn’t mean I don’t need breaks, too, haha!They’re allowed one hour of iPad a day.

They do get bored at times, but I would tell them that it’s okay to be bored. And that there’s not much we can do, so we have to accept that we are on lockdown.

They read or paint, play Minecraft, build Legos. Kenzie just turned 10 and my cousin gifted her with the Star Wars Ewok Village Lego set, so that has been keeping them both busy.

I always tell them they can do whatever they want. Good or bad. But whatever decisions they make, they deal with consequences.

So in terms of being bored, they could choose to be bored, or find something to do. Or with school or baking, or piano playing. It’s studying or baking or practicing versus not. So they make their own decisions.

I think it is important to raise critical thinkers who are responsible for their actions. I’m trying to instill in them a work ethic. They need to learn nothing will just fall in their laps. But my husband Mike and I will always be here to help as much as we can.

Wife to Raul Francisco and mother to Monica, Mio and Diego:

Raul and I spend as much time with the kids as we can, and lockdown has given us a concentrated version of what we were already doing prior.

Having them with us 24/7 has been a journey of rediscovering each other at this stage in our lives. Raul is like an activities director, camp coordinator and teacher rolled in to one, and we all just follow his lead.

The mornings are for sports, workouts and activities with our dogs; the afternoons are for their respective reports or immersions in the art world. Evenings are for movie nights or games. In between are the meals that we always have together.

We discuss projects, life, plans, hopes, fears and everything under the sun! We have done our spring cleaning, organizing everything we may have overlooked prelockdown, and the kids have been involved in everything, every step of the way. We are pretty much all glued at the hip, whether it’s for business, pleasure or fun and games.Raul even makes Diego (their youngest) do reports on countries and leadership.