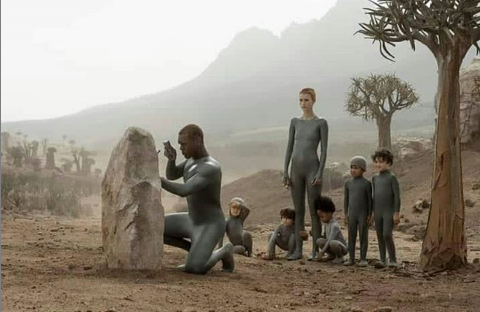 When Ridley Scott, the legendary filmmaker behind “Alien,” “Gladiator” and “Blade Runner,” began directing his first television series in decades, he was faced with a dilemma.

Sci-fi show “Raised by Wolves,” premiering on HBO Max on September 3, sees a pair of advanced male and female androids land on a new planet after the destruction of Earth, charged with raising a new colony of humans.

“Because it’s Adam and Eve, really they should be naked,” Scott said. “And I thought, ‘That may be a bridge too far for HBO — they might have a heart attack.'”

His solution came as he walked past lingerie store Agent Provocateur in London’s Soho district, spotting a racy elastic bodysuit in the shop window.

“The elasticity became a metaphor for nakedness,” said the British auteur. “Besides, (nudity) would be too distracting.”

And that dystopian vision — a universe in which a 22nd-century Earth has been ripped apart by war between atheists and the Mithraic religious movement — has resonance for the turbulent world of 2020.

“We don’t learn by past events, and we keep making the same mistakes…we’re witnessing that right now,” said Scott. “So it’s relevant to me in that way.”

“Science fiction looking forward is useful if somebody pays attention, because in a funny kind of way it’s like striking a warning bell.”

Scott’s decision to direct on the small screen for the first time since his BBC career in the 1960s came once a script from Aaron Guzikowski (“Prisoners,” “Papillon”) landed on his desk.

“I read the material, the material was inspirational,” said Scott. “I thought — I can’t let this one get away, I need to do it. It was that simple.”

The plot sees both atheist and religious survivors of Earth’s apocalyptic war flee to Kepler-22b — the only known inhabitable planet.

On this dangerous, remote planet, humans and androids become entwined in a battle for survival amid warring faiths and fearsome artificial intelligence.

Scott, who executive produces and directed the first two episodes, told journalists his biggest challenge was to “try not to repeat yourself” and “make this look different.”

After all, it is just five years since Scott stranded Matt Damon on Mars in “The Martian.”

“It felt like we were working with him on a new project, rather than with him on another piece of ‘Alien’ or another ‘Blade Runner.'”

He added: “It was all part of this growth of ‘what it means to be an android?’ If they can feel, if they can’t feel…how does that compute, what’s our error code?”

“I tried personally just to forget who he was, to be able to work, and be like, ‘Thelma and who? I haven’t seen it! Couldn’t care less!'” she joked.

That androgynous dual role is emphasized by her short, cropped red hair — Scott says he was “thinking of David Bowie” — and of course, those body-hugging spandex outfits.

“They’re beautifully crafted. But… every time you need to lube and talcum to put on a costume, I think… I don’t know!” Colin said.