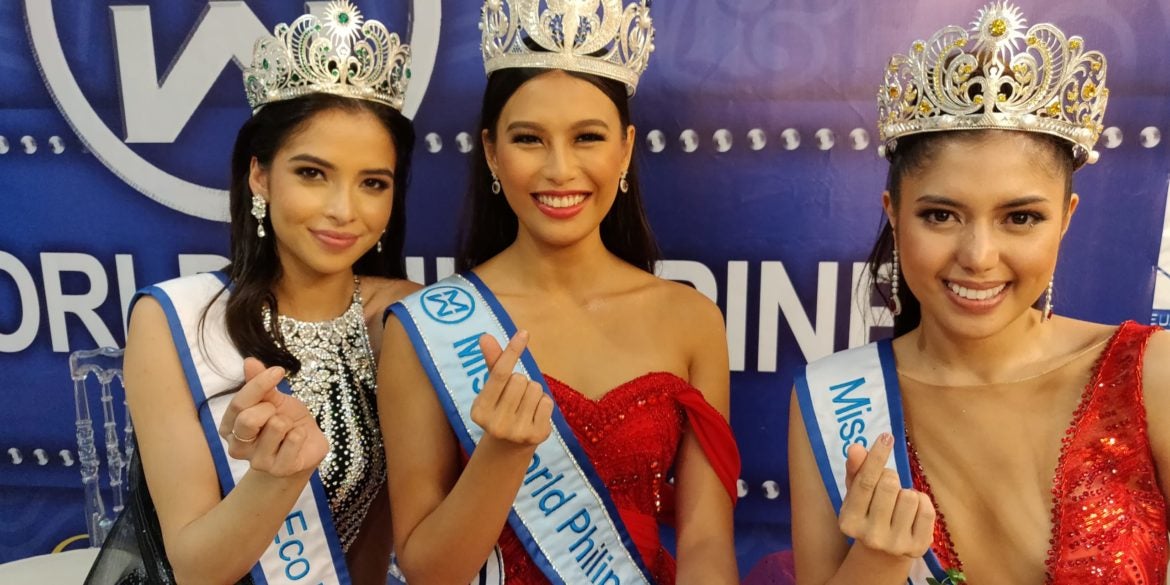 Miss Eco Philippines Kelley Day (left) and Miss Multinational Philippines Isabelle de Leon (right) would have to wait longer before they can get to compete abroad. Miss World Philippines Michelle Dee (center) finished in the Top 12 of the 2019 Miss World pageant in London./ARMIN P. ADINA

MANILA, Philippines—Two queens crowned in the 2019 Miss World Philippines pageant have yet to embark on their respective international assignments after the global COVID-19 pandemic put their global tilts on hold.

Kelley Day was supposed to compete in the 2020 Miss Eco International contest slated in March 2020 in Egypt, while Isabelle de Leon was set to take part in the 2020 Miss Multinational pageant in April in India.

But when the pandemic hit most parts of the globe, resulting in travel restrictions between countries, the two international beauty pageants rescheduled their respective coronation ceremonies to latter dates.

The India-based pageant initially moved the contest to May, while the Egypt-based contest set a June final program.

When the global pandemic showed signs that it will not go away soon, the Miss Eco International organizers announced the pageant season to be between August and September.

However, its most recent announcement said the contest will revert to its traditional schedule in March, thus canceling the 2020 edition altogether.

The Miss Multinational pageant, meanwhile, still has not announced a new schedule, but the contest traditionally takes place in the first quarter of the year.

Following an earlier announcement made by the Miss World Organization (MWO) canceling the international pageant’s 2020 edition, and holding the next contest in 2021, the Miss World Philippines (MWP) organization decided to postpone its edition this year and to hold a competition in January 2021.

This means that Day and De Leon will be crowning their successors even before they can get to compete abroad.

But MWP General Manager Arnold Mercado told the Inquirer in a phone interview that the two ladies will still get the chance to parade the country’s colors on the international stage.

“Yes, Kelley will still compete in Miss Eco, and Isabelle will still be our representative in the next Miss Multinational,” he assured.

But this is not a unique case for our local beauties. In 1993, Binibining Pilipinas-World Ruffa Gutierrez relinquished her national crown to her successor Caroline Subijano weeks before she competed in the Miss World pageant.

The 1994 edition of the Binibining Pilipinas pageant was held earlier, in the last quarter of 1993, to prepare for the country’s hosting of the 1994 Miss Universe pageant.

Many Filipino pageant fans have expressed their confidence that both Day and De Leon will put up a good fight on the international arena, as both are seasoned television personalities.

The Philippines took home the Miss Eco International crown in 2018 with Cynthia Thomalla, while Filipino queen Sophia Senoron won in the Miss Multinational pageant’s maiden edition in the same year.

Meanwhile, the MWP has announced that it has started to accept applicants for the Miss World Philippines and Mister World Philippines contests. Details are available on the organization’s official Facebook page.