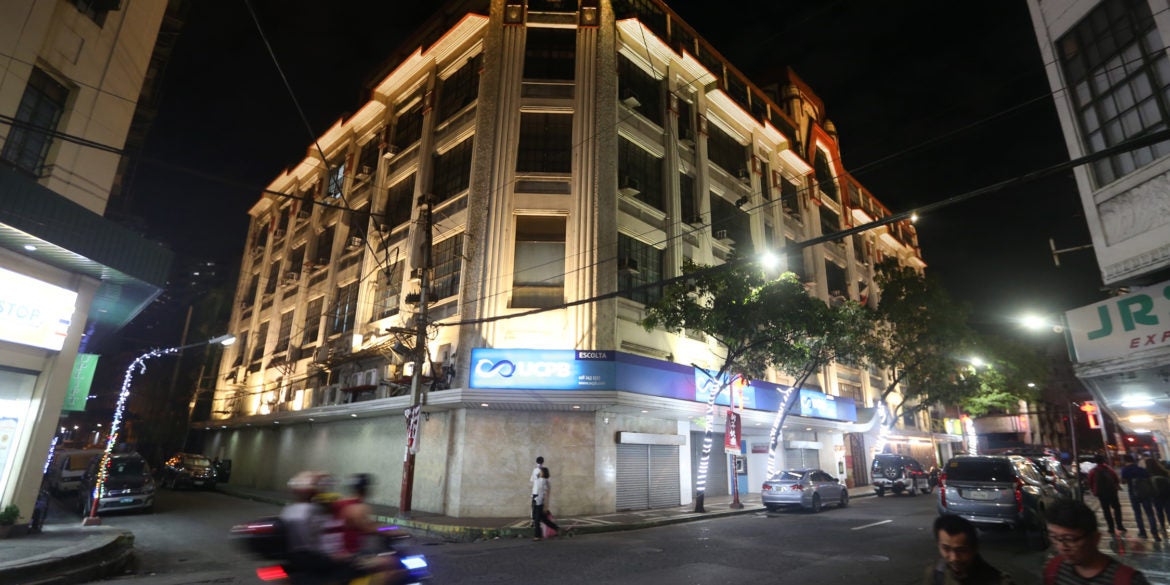 Escolta is cautiously stirring back to life

At First United, the 1928 Art Deco building that had become ground zero for the street’s cultural renaissance, the focus is survival

Escolta was alive and kicking the last time we passed by.

It was getting close to midnight, but the lights were still on at the First United Building, the 1928 Art Deco building that had become ground zero for the Escolta cultural renaissance: a loose movement of creative entrepreneurs (or entrepreneurial creatives) who were trying to bring life back to Manila’s long-forgotten business district.

They were gaining ground, too, judging from the noisy crowd of regulars at Fred’s Revolucion, the artist-run bar on the ground floor that had become the favorite after-hours watering hole for the Escolta crowd.

It all came to a screeching halt as the city went under lockdown in the wake of the coronavirus pandemic. Businesses shuttered, patrons stayed home, and Escolta once more fell silent.

Six months later, the street is cautiously stirring back to life.

Fred’s reopened in July, for takeout only, as have a few other businesses. Its neighbor The Den Coffee Shop opened an “online coffee shop” offering virtual ambience and delivery. (It has since reopened with reduced occupancy.)

But the unpredictable nature of the virus, and the fits and starts of quarantine restrictions, have made it extremely difficult to regain any kind of momentum.

Luckily, she adds, some of the building’s tenants, mostly brokers and other business offices, are back to full operation, which helps.

Her main worry at the moment is the Hub: Make Lab, an artist-run incubation space for small creative startups, which occupies the floor, which used to be the famous Berg’s Department Store, an Escolta landmark from prewar days until it finally closed in the early 1980s.

“They’re the ones who were bringing life back to Escolta,” she says.

The First United Building is a model for the “adaptive reuse” strategy of heritage conservation which, in a nutshell, believes that the best way to preserve a historic structure is to adapt it to contemporary use while retaining its unique architectural features.

Rather than keep a heritage structure as a museum piece, adaptive reuse chooses to enliven it with human activity, such as shops, offices, restaurants, events—the stuff of life. Eventually, a community arises around the structure. In the process, the whole enterprise becomes sustainable.

Escolta was on the way when the pandemic hit.

“We’ve tried to reinvent First United,” says Sylianteng. “In the beginning, we didn’t really know that much about heritage architecture. It was architect Dominic Galicia who schooled us on its history.”

(Among other projects, Galicia was behind the redesign and conversion of the old Ministry of Tourism building into the new National Museum of Natural History.)

The family has since devoted space to the First United Building Community Museum, which contains photographs and artifacts from Escolta’s glory days when it was Manila’s premier business and shopping district.

Formerly known as the Perez-Samanillo Building, the First United Building is a sterling example of the Art Deco style of architecture that became popular in Manila during the American colonial period. It was designed by architect Andres P. Luna, son of Juan Luna, and completed in 1928.

The building was acquired by businessman Sy Lian Teng, who owned Berg’s, in 1979, and his heirs have been active in the reinvention of Escolta Street, once Manila’s central business district, into a cultural/tourism/leisure hub.

The coronavirus pandemic has made this especially challenging: for the time being, the focus is on survival.

Another concern, says Sylianteng, is preserving the structural integrity of the building—a common problem encountered by heritage structures, specially when they have to coexist with modern ones.

Construction work on the old American Chamber of Commerce Building next door has resumed, she says.

It might be remembered that the demolition of the long-derelict structure was halted in 2017 by the National Historical Commission of the Philippines (NHCP), citing the structure’s status as an “important cultural property.” Any future construction work would be subject to review by either the NHCP or the National Museum.

The new owners have reportedly reached an agreement with the government, preserving at the very least the facade while allowing demolition of the rest to proceed.

The problem is, pile-driving operations for the new building’s foundations could potentially affect the structural integrity of First United Building, which is right next door. Other historic nearby buildings, such as the Burke and Regina buildings, may also be affected according to Sylianteng, even as other high-rise constructions have been earmarked for the district.

A similar problem was encountered by the historic Gota de Leche building in Sampaloc, Manila, when construction of the new University of the East campus began in 2018. Cracks started showing in the newly restored building during the pile-driving for the new campus—a high-impact operation with seismic consequences.

Complex negotiations had to be undertaken between Gota de Leche and the Lucio Tan group, owners of University of the East, involving structural engineering studies and the involvement of the National Museum. Eventually, a memorandum of agreement was drawn up between the parties to explore lower-impact alternatives.

A similar process is now under way between First United Building and the new owners of the American Chamber of Commerce property. Thus far, the talks have been cordial, says Sylianteng, but it’s another complication of life in Escolta in the time of the coronavirus.