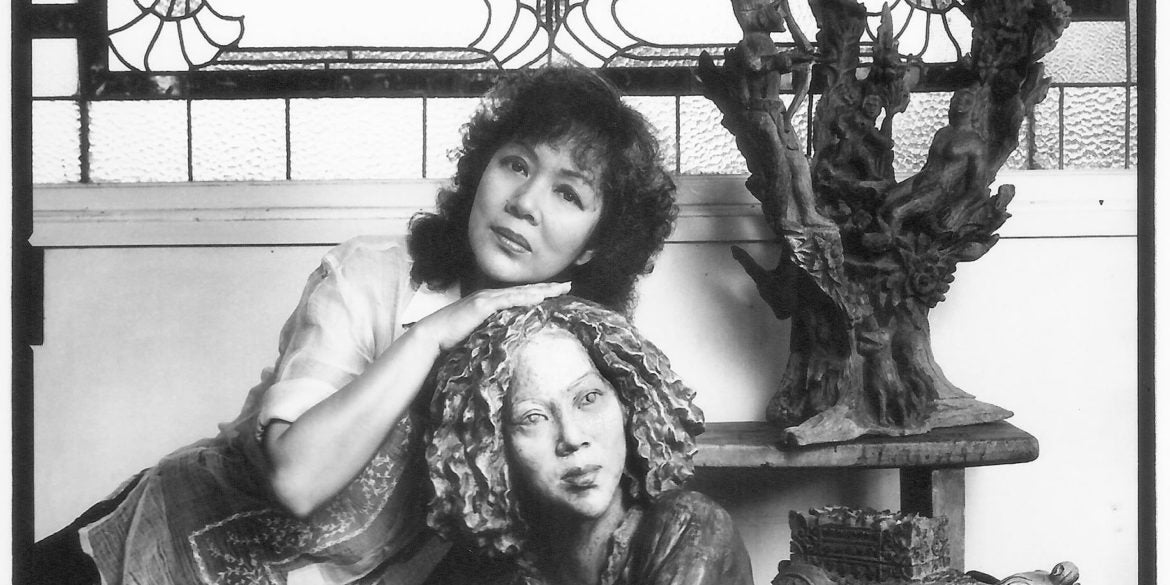 ‘For her there is always more to see and be, and now it is the other world that has her. She has most likely arrived there in style’

As we were quarantined in our homes by the pandemic, Belgium-based writer Nash Tysmans aired the cultural community’s frustration over not being able to assemble to openly mourn Gilda Cordero Fernando’s (GCF) passing.

Nash vented on her Facebook: “It really seems wrong to not be able to party and send GCF off with a bang! Isn’t there something we can do together to celebrate her beautiful life? Aswang party anyone? Hay.”

I don’t blame her.

Known also by her initials GCF, the trademark of her deluxe Filipiniana books, Gilda came into my life in my teens, when I slowly read her long short story “A Wilderness of Sweets.” Slowly, because I didn’t want the experience to end. Reading it aroused my curiosity about the author. I read more of her stories, columns and magazine articles

I was an applicant to the University of the Philippines Student Catholic Action group. That was where I met Bey Fernando, who questioned why his parents had to be “so bourgeois.” Who are your parents? I asked. When he said Gilda was his mother, I almost pinched him. But it was the early ’70s when the youth was inclined to question many a thing about our family backgrounds in the spirit of criticism and self-criticism.

I met her later in college in a literary soirée hosted by F. Sionil Jose at his Solidaridad Bookshop. She signed my copy of her book. She seemed distracted, but when I told her I knew her son Bey, she turned her attention to me.

Onward to 1976, when I worked as a Life and Leisure reporter for the Daily Express. I got a phone call from Gilda, who had just released “The Culinary Culture of the Philippines,” now a rare book. She said in a pleading tone, “I sent a press release about the book. Pakisabi naman kay Tere (Orendain, my editor) na ilabas lang. Please!”

At the back of my mind was the question, why did someone of her stature have to make pakiusap with Tere and a host of other editors to get newspaper space for a groundbreaking book?

In 1980, while working as copy editor at People’s Journal, I also wrote for the sister publication, a glossy called Architectural Journal. I bagged an assignment to interview and write about Gilda who had put out “Philippine Ancestral Houses.”

I have no copy of my article, but I remember my first time in Gilda’s home office in Quezon City, and how our lingering conversation moved from her place to the gate of her mother Consuelo’s house in Malate where she dropped me off so I could take a jeep to Port Area (then the newspaper row).

Even in her car I was scribbling, she was so quotable. I asked her what she thought of those critics who chastised her for publishing expensive books. Her riposte: “Show me their manuscripts, and if they’re good, I’ll publish them myself!”

I don’t know at which point we became friends and met each other regularly to talk and eat. I think it was in the 1980s, at the height of the Middle Forces’ opposition to (President Ferdinand) Marcos.

One was a procession-rally, a pasyon, from Intramuros to the US Embassy. Only Gilda could get away with dressing CB Garrucho as the First Lady Imelda R. Marcos, Nikki as a Blue Lady, Joji Ravina as a bully RAM boy, Odette as Inangbayan.

A most memorable production was the State of the Nation Fashion Show at The Plaza dining hall in Makati. Gilda drafted the script read by CB and Behn Cervantes, while models like Maita, Gigi, Joji, Nelia Sancho sashayed down a ramp in deconstructed clothes and gowns that reflected the deterioration of society under the dictatorship.

The show’s ambience was electric. Gilda feared that anytime, the Constabulary or military would swoop down on the organizers and stellar models. Nothing of the sort happened. Instead, the event was well covered by the “mosquito” and foreign press.

I would lose touch with Gilda when my babies arrived and I became a breastfeeding mother for six straight years. One time we ran into each other, and she invited me to go with her on a trip to a Rizal town. I begged off. She remarked, “What are you doing aside from being a cow?”

Well, that was Gilda. She didn’t like it if her friends turned into drudges. When I was settled in Baguio, she once called long distance to ask what I was doing. When I answered that I was laundering my family’s clothes, she said, “Huwag iiyak! Hindi bubula ang sabon.” It was enough to snap me out of my self-pitying reverie.

When she first met my husband, Rolly Fernandez, she whispered to me, “Macho pala!” Later, she found that he was a diligent provider who did the marketing, the groceries, even the occasional cooking, the gardening, the upkeep of the house. Maybe she saw a little of her husband Marcelo in him.

That’s when she proclaimed to all and sundry that she loved Rolly more than me. Almost every time I visited her, she ensured that there was pasalubong for him. Later on, the pasalubong took the form of her watercolor paintings. She even did a portrait of him called “Rolly’s Morphing Tower of Hearts.”

‘A bit of the aswang’

But there’s eeriness to this generosity, a bit of the aswang in her. Once she insisted that I bring home another painting. Seeing how fragile the watercolor paper was, she reached into her drawer and pulled out a work on canvas to serve as wrapper.

Back in Baguio, Rolly unrolled the package and saw that the artwork was by young painter Don Salubayba. At the moment Gilda was handing the two paintings to me and unknown to us, Don was dying of an aneurysm.

A source of personal pride was when she tapped me in the 1990s to copy-read her and Mariel N. Francisco’s essays that went into the joint autobiographies: “Ladies’ Lunch and Other Ways to Wholeness” and “A Spiritual Pillow Book.” Manny Chaves, who eventually replaced Mariel as Gilda’s BFF, was the designer. She trusted me enough to abide with the titles I chose for the books and for some of the articles.

Like any GCF jamming project, the working day began with breakfast of pancakes made from scratch by Marcelo and ended in a merienda of mashed avocados in ice, milk and sugar.

The last two times I saw her were at the wake of writer Sylvia Mayuga and in the New Year get-together in her house of the GCF Fan Club (the name approved by her last year at a lunch at Fat Russel’s Kitchen to celebrate her 89th birthday). Little did we know the latter occasion would serve as farewell party, too.

By then, I could barely have a conversation with her, much less hear her. She spoke in a soft, raspy voice. It seemed she had retreated to the deep, contemplative silence of those advanced in years and illness. The spark in her eyes was still there. So were the stylish garb and makeup. We were a noisy gaggle of women, except for Rolly and photographer Wig Tysmans, another of her anak-anakan.