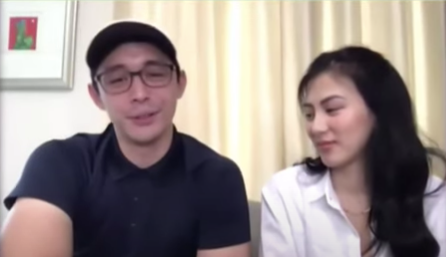 Actress and celebrity vlogger Alex Gonzaga will not challenge her husband-to-be, Lipa City councilor Mikee Morada, should he ask her to give up acting and vlogging once they are married.

In the recent episode of “I Feel U” hosted by Toni Gonzaga, as seen on ABS-CBN Star Cinema’s YouTube channel, Alex was asked by her elder sister Toni if she’s willing to turn her back on everything if Morado requests it. Alex answered in the affirmative.

(Yes, because I know that Mikee will only say that if there is a really important reason, and that it would be very reasonable, that’s why he’d do that.)

“Hindi naman niya hahayaan na talikuran ko ‘yung something na alam niyang nag-e-enjoy ako,” she added. (He will not allow me to turn my back on something that he knows I enjoy doing.)

But Morada was quick to say that he is not selfish and that he would not allow Alex to leave something she loves, or change who she is.

(We should be partners. So what I always tell her is that she should grow in her own career and I will grow in mine.)

Since they are altar-bound, the couple was asked about what they look forward to in marriage.
“Honestly, ‘yung tabi kami na matutulog,” Gonzaga quipped, citing that they make do now with saying good night via video calls. (Honestly, I look forward to us sleeping next to each other.)

Morada, for his part, looks forward to the totality of their married life.

(Actually, I look forward to everything, being with her, coming home, having children, growing old, everything. I am excited about what will happen.) JB