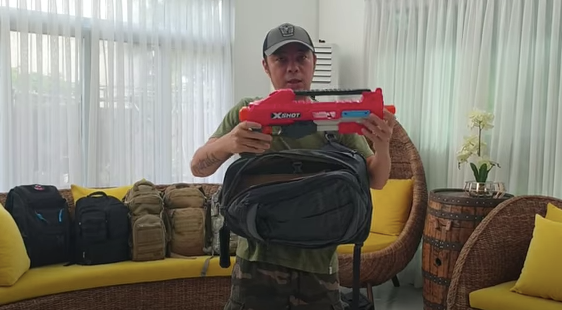 Chito Miranda shows off collection of everyday and tactical bags

Unknown to many, there are also hardcore bag collectors among male celebrities. One of them is Parokya ni Edgar frontman Chito Miranda who proudly showed off his collection.

(Maybe you ladies thought only you are into bags. Well, there are men like me who love bags and collect them.)

Miranda displayed his “Everyday Carry, bug out and medical emergency bags” in his YouTube vlog on Sept. 1. He first showed his “everyday” bag which he carries with him “under normal circumstances,” when he needs to stay overnight in a hotel and when having a gig. The bag can carry all of his toiletries, a first aid kit, laptop and clothes. It also has an “all purpose shove-it pocket” for a baton and a helmet.

The second bag was the little version of the first bag, with exactly the same features but much smaller. The third bag is a family emergency bag.

(In case of emergency, this bag carries it all. I don’t need to collect things anymore. All that’s need is here.)

The next bag is a tactical bag which he uses as a “medical emergency bag,” where his “basic first aid kits for minor cuts, headaches [and] minor bruises” can be found.

Miranda also showed an extra bag which he uses for hiking. He bought it because it bears a water container.

He then talked about his Vertex commuter sling, another “everyday bag” which makes him feel comfortable, he said, because he need not take it away from his body when he needs to get something.

The last one Miranda showed was a “tactical 2 banger bag” which has several “strap hooks on different locations for different carry options.” He also talked about the cost of the bags and which ones would be best to use, especially if you are aiming for a certain look or vibe.

Miranda later revealed that he gave freebies such as a cap, a sticker and a tactical knife to one of his lucky vlog subscribers. JB