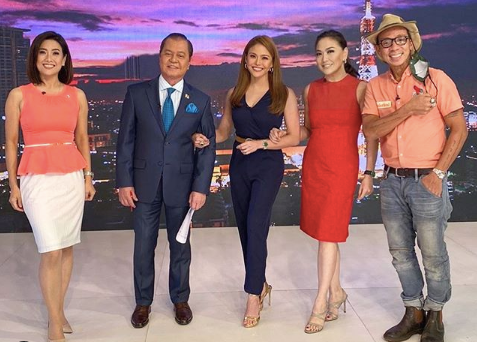 Davila posed with her co-anchors and “TV Patrol” mainstays Bernadette Sembrano, Noli de Castro, Gretchen Fullido and Kim Atienza on the set of the news show, as seen on her Instagram page yesterday Sept. 16.

“Sa totoo lang, kinakabahan at nininerbyos ako nung una (Frankly, I was feeling nervous at first). I haven’t done #TVPatrol in 10 years and I haven’t done #Bandila in almost [seven] months,” she said.

Davila recalled that she last did anchoring chores for “TV Patrol” in 2004 to 2010 with Julius Babao and Ted Failon. She then moved to “Bandila” from 2010 to 2020 with Babao and Ces Drilon.

“Noong nagkaroon ng COVID (When we had COVID), the late night newscast went off air mid-March for safety reasons… hanggang sa tuluyan nang hindi na-renew ang franchise (until the franchise was no longer renewed),” she explained.

Davila said she is all set to take things “one day at a time” and is just “so happy” to be reunited with the “TV Patrol” team. JB

Arnold Clavio on Karen Davila’s lament over ‘who’s next after Rappler’ joke: ‘Solidarity and courage’ is the message