The crippling cost of job loss: How to cope | Inquirer Lifestyle ❮ ❯ 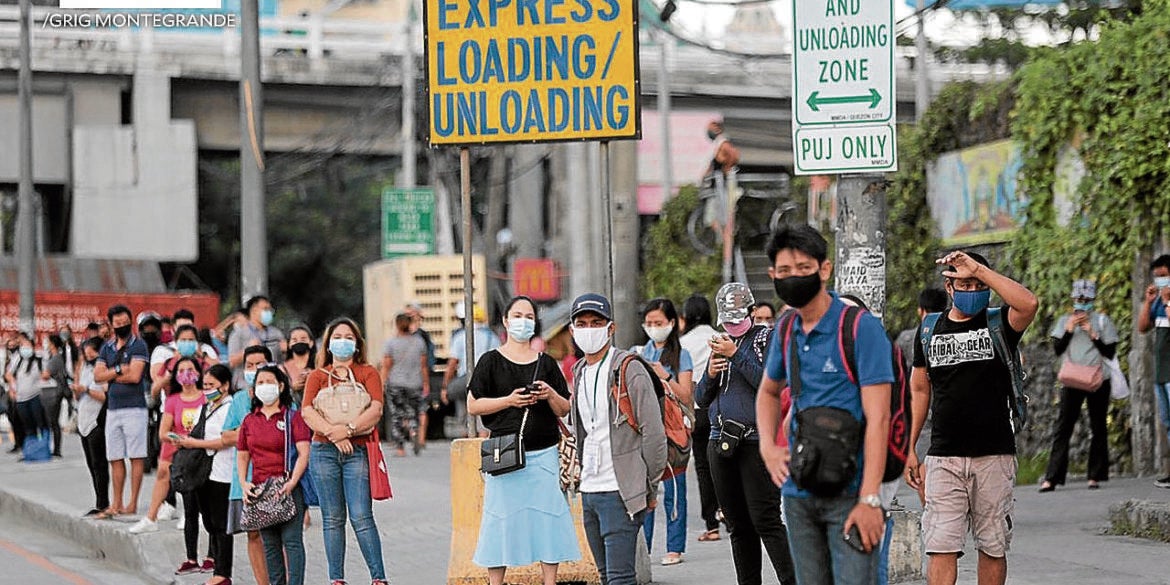 The crippling cost of job loss: How to cope

There was nowhere to hide, unlike when I was diagnosed with cancer, when I used to go to churches and just crumpled up in corners to cry

The name itself sounds like that of an ancient plague—metathesiophobia, the fear of sudden change—and until recently, most Filipinos did not suffer from it. It was not even the new coronavirus disease (COVID-19) or the quarantine that followed which triggered it; it was the storm surge of lost jobs that did.

Jonathan (not his real name), 38, represented the most modern of employees, a creative working in multimedia at an established media company—he was an editor at a digital arm of ABS-CBN. “I was set on working with the title for the foreseeable future,” he said.

That was, of course, before Congress refused to renew the media conglomerate’s franchise, leading ABS-CBN to shed an estimated 11,000 personnel, a mind-boggling figure for such a big company. Jonathan was retrenched.

“Although I expected the worst following the loss of our franchise, I was still devastated when I received the news,” he said. “I was angry at the people responsible for it, none of whom were part of the company. I was depressed for days.”

Maxine (not her real name), 51, had been with ABS-CBN even longer, since 1997, and was already an executive producer for one of its divisions. “ABS-CBN was our home, and I thought I would stay until I retired,” she said.

She, too, was retrenched: “Ninety-five percent of our company workforce, including our entire division, had to be dissolved because we lost our main income source. Coupled with the impact of the pandemic destruction, the huge infrastructure could not be supported by what was left.”

Like Jonathan, she could only try to get through it. “Our company prepared us, but when the formal letter arrived in my inbox, I was still crushed. Quiet crying jags, for sure, because I wanted to keep my family’s spirits up. There was nowhere to hide, unlike when I was diagnosed with cancer, when I used to go to churches and just crumpled up in corners to cry. With the COVID threat, my dependents—my 75-year-old mom and my daughter—might see me cry and be disheartened. So I hid in the bathroom and, for two days, I slept like the dead.”

Jonathan and Maxine were only two of the many workers who lost their jobs during the pandemic, whether directly because of COVID-19, or simultaneous issues such as the ABS-CBN shutdown.

August was a vicious month. According to the Department of Labor and Employment (DOLE), in the first nine days of the month, 944 establishments let go of 16,134 workers, an average of 1,792 workers laid off every day. By August, DOLE statistics indicated that 157,705 workers had lost their jobs due to retrenchment or permanent closure of 7,759 workplaces. Metro Manila led with 75,178 displaced workers.

The pandemic claimed jobs from all levels and industries, from call center agents to carpenters, vendors to massage therapists. The companies which could shift to a work-from-home setup did so almost immediately, but for many, it wasn’t enough.

It started with just the contracts not being renewed, furloughs and temporary suspension of operations, but soon chains were shutting down branches one by one and entire divisions being eliminated. Suddenly everybody knew someone who didn’t have a job.

Jeepney drivers, stalled by road rules, were living in their jeeps with their families. Eateries, from carinderias to the University of the Philippines’ famed Chocolate Kiss, were gone for good. No field was left unscathed, even bulwarks like business process outsourcing and show business (ironically identified as the worst affected sector of all).

By Aug. 18, a Social Weather Station survey found that 27.3 million—46 percent of all Filipinos—were jobless. Socioeconomic Planning Secretary Karl Kendrick Chua said the lockdown had shut down an estimated 75 percent of the Philippines’ economic activity, and was expecting a recession, as shown by the 16.5 percent shrinkage of the economy in the second quarter, the worst since 1983.

Those are numbers, but these are real people, each decimal point carrying its own burden.

Jonathan and Maxine were fortunate; they were both given what they considered fair unemployment benefits. “There were also job search assistance, and various workshop and counseling programs available to us,” he said.

Maxine remains angry at the treatment the company was given in general: “The worst thing about the experience is the anger at the injustice we suffered and the continuous barrage of heckling and malicious celebration from trolls. Our company did not deserve this. Our company gave to society far beyond its mandate to tell the people’s stories.”

She does, however, appreciate that it brought many of the employees closer.

Such a sudden loss of employment has physical and psychological effects, according to addiction medicine and clinical toxicology specialist Dr. Joselito C. Pascual.

“The individual would immediately experience fear and anxiety. Being removed from one’s job, short- or long-term, can be overwhelming and can trigger strong emotions and reactions,” Pascual said.

“There is fear and worry about their own and loved ones’ safety and future because of the impending financial uncertainty. Uncertainty about the future may develop into paranoia, changes in sleeping patterns, difficulty concentrating, development of psychological conditions such as anxiety and panic attack.

“There is worsening of chronic physical and psychological symptoms such as despondency, which may develop into full-blown clinical depression, accompanied by suicidal ideations brought about by desperation,” he added.

The immediate panic and fear are not unexpected, though, and may not be unilaterally harmful. “These fight or flight responses can help affected individuals calm down and get a grip of their current situation, refocus, rethink, seek understanding, and learn to pick up where they left off and develop a realistic plan of action,” Pascual said.

It would help if the companies communicate openly with their employees and provide psychosocial and financial support. A support system from friends and families is crucial because there is so much to worry about.

“The worst things were the feelings of uncertainty and helplessness,” Jonathan said. “We are still in this pandemic, there is a recession, and media is embattled as it is. There are absolutely no guarantees for the future. It feels like I have to start over.”

Pascual noted there were actions the affected employees needed to avoid: “Self-isolation and cutting themselves off from loved ones can trigger depression and make coping difficult and worse. There are also unhealthy ways of coping such as excessive drinking, eating unhealthy food, lack of exercise and self-medicating their emotions with unprescribed medications.”

Beyond the emotional and mental toll, the suddenness of the job loss also brings financial damage.

“I have some savings to tide me over for a few months,” Jonathan said, but it was a completely different case for Maxine. “I was not prepared financially for the separation,” she said. “I am a solo parent who needs regular monitoring for cancer recurrence. My daughter just started college. My 10-year financial plan is only on its second year. I would have survived a pay cut, but to be let go in an industry where our company was the biggest and strongest? And with thousands competing for the tiny niche openings? And with the Philippines being an employers’ market, with the choice to hire from the younger, unattached, cheaper demographic?”

Randy Feria is chief investments consultant and owner of IN3 Investment Consultant Services. “If the company provides retirement pay, then this gives a little cushion to the financial impact, because the individual can still expect some salary for a month or so,” he pointed out. “It gives them time to search for another job opportunity. If the individual has savings, the impact is not as bad since he or she can still ‘survive,’ and savings can buy the time needed to find another source of income.”

Feria said the jobless should sit down and take stock of their financial situation realistically by writing things down; immediately think of ways to simplify in order to “stretch” whatever they have for as long as possible; and canvass one’s “strengths,” “giftedness” and “experience” that would be assets for future employment, because one has to view employment as part of a continuum.

Feria warned that there are actions the newly jobless must avoid: “Avoid as much as possible taking out high interest loans. This is the time when the old Filipino term kapit sa patalim comes into play. We are tempted to secure funds even if we do not understand what it will take from us in the future. We may be able to secure some of our short-term needs, but we get buried in deep debt, which we will have a very difficult time paying off later on.”

The government has decided to jumpstart the economy by easing quarantine restrictions, because the long-term economic fallout is too terrifying, something the scientific and medical communities have not been completely behind.

Those who have lost their jobs, even in these worst of times, will need to find future employment. “I was set to join another title, but decided to take a short break instead and explore possibilities in the gig economy,” Jonathan said

Maxine is also waiting for the best opportunity: “I have received two offers for work so far, but they require my physical presence. The COVID situation complicates matters for now, as I don’t want to risk my mom’s health.”

The key to both their approaches, however, is that they are reevaluating their prospects as they prepare to return to the job market. “I am relatively strong, mentally and emotionally, but I am not stoic,” Maxine said. “While answering these questions, tears are threatening to overwork my ducts again. I will survive, though, because that’s what I am—a survivor.”

Though the situation may seem overwhelming, Pascual said the jobless must gird for what comes next. “Strengthen your spirituality, resiliency and most of all, be hopeful that there is recovery after disruption.”

Feria went even further, saying there was something to be gained in these terrible circumstances: “It could be a time to pause and reflect, perhaps to find our purpose and mission. It is a time, if used appropriately, that could profoundly bring a beautiful breakthrough in our life. So don’t lose hope, don’t be afraid.”

For Jonathan, it all comes together in what he decides to do every day: to not forget, but to also keep trying.

“I guess the realization is that it’s okay to be sad, pissed off and feel all sorts of bad,” he said. “But it’s even better to channel all that emotion and energy into purpose, whether it’s a job search, getting people to vote better in 2022 or simply getting up in the morning with the purpose of giving it a good try.”