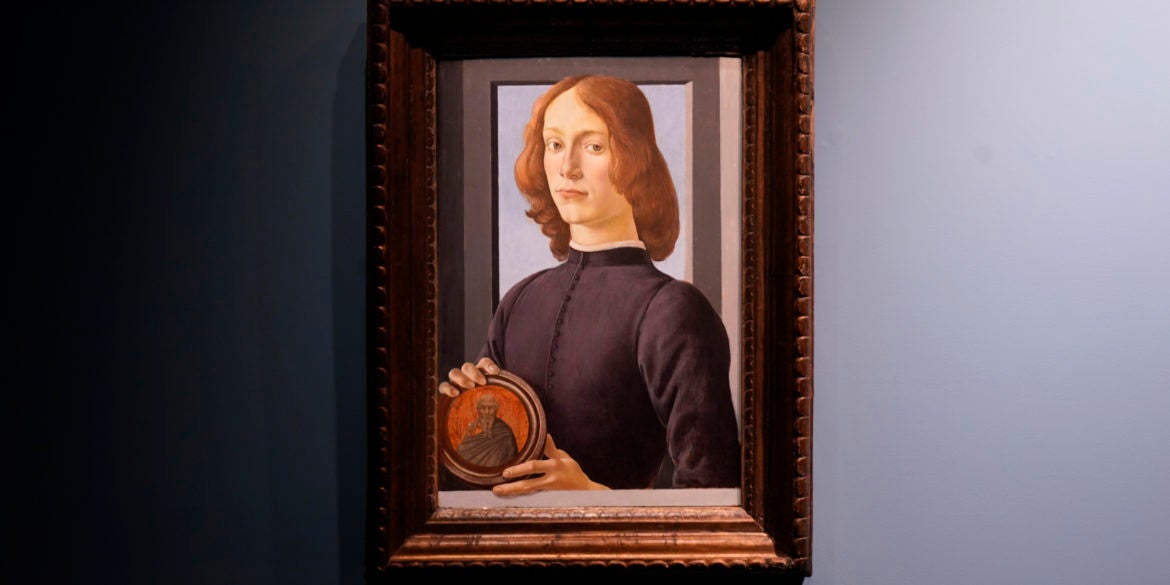 Sandro Botticelli's 15th-century painting called "Young Man Holding a Roundel" is displayed at Sotheby's on Sept. 23, 2020, in New York. The painting will go on auction next year and art watchers will be seeing if it fetches more than its eye-watering $80 million estimates, despite the pandemic. Botticelli’s 15th-century portrait of a nobleman in “Young Man Holding a Roundel” is the highlight of Sotheby’s Masters Week sale series in New York in January. (AP Photo/Seth Wenig)

Portrait by Renaissance master expected to soar past $80M

NEW YORK — An enigmatic painting from Renaissance master Sandro Botticelli will go on auction next year and art watchers will be seeing if it fetches more than its eye-watering $80 million estimates, despite the pandemic.

Botticelli’s 15th-century portrait of a nobleman in “Young Man Holding a Roundel” is the highlight of Sotheby’s Masters Week sale series in New York in January.

“Just the sheer beauty of this has been a joy,” said Christopher Apostle, who has for more than three decades handled Old Masters and is now head of the division. “I can’t think of a Botticelli like this that’s been on the open international market.”

Opportunities to acquire a Botticelli — the artist behind such masterpieces as “Primavera” and “The Birth of Venus” — are very rare.

“The fact that there are 12 known portraits by Botticelli puts it in an elite type of situation,” said Apostle. “These are the most personal things he produced, in a way. It’s just something he’s doing with one individual.”

The auction house believes it could get over $100 million. The last painting to achieve that level at auction was Claude Monet’s “Meules” at Sotheby’s New York in 2019, going for $110 million.

If it reaches those dizzying heights, it would represent a windfall for the present owner. The painting was last acquired at auction in 1982 for £810,000 (or just over $1 million today).

Apostle doesn’t believe the global pandemic will depress interest in the work. “We’ve seen even during this time period that people are hungry for art, hungry for masterpieces, always.”

The painting — believed to have been executed in the late 1470s or early 1480s — actually represents two artworks. Botticelli painted the noble sitter but the roundel — a circular disc used as a symbol — depicts a saint and is an original 14th-century work attributed to the Sienese painter Bartolommeo Bulgarini.

Who the young man depicted has been lost to history as well as why he holds the roundel. Some scholars believe he is associated with the ruling House of Medici or another powerful family in Florence.

Apostle said some things can be inferred: The young man’s hair is long and fashionable for the time. His tunic is buttoned up and restrained, dressed in a republican way.

“There’s a rectitude to this picture and a lack of arrogance while still being very confident that I think exemplifies that attitude that these republicans in Florence felt about themselves,” he said. “Also, by presenting this medallion, he’s just making sure we’re aware he’s a cultivated person.”