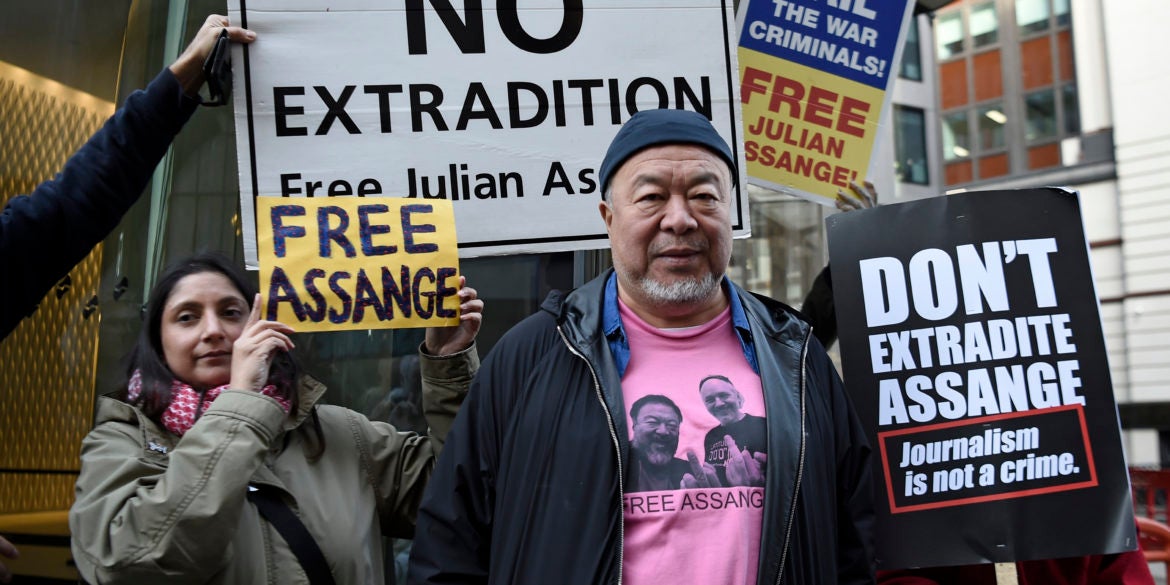 Chinese dissident artist Ai Weiwei (C) poses with protesters outside the Old Bailey court in central London on September 28, 2020, where the extradition hearing against WikiLeaks founder Julian Assange's has resumed. - Assange is fighting to avoid extradition to the United States for leaking military secrets. If convicted, Assange -- who has been held at the high-security Belmarsh Prison for the last 16 months -- could be jailed for up to 175 years. (Photo by DANIEL LEAL-OLIVAS / AFP)

Dissident Chinese artist Ai Weiwei held a silent protest on Monday outside a London court to demand the release of WikiLeaks founder Julian Assange, who faces extradition to the United States.

Exiled Ai, who left China for Germany in 2015 after becoming a target of Beijing’s wrath, said Assange’s possible prosecution in the US was “unbelievable”.

“Let him be a free man,” Ai said outside the Old Bailey court in the British capital, wearing a pink T-shirt featuring him next to Assange, both holding up a middle finger.

“He truly represents the very core value of why we are fighting, the freedom of the press.”

Assange faces 18 charges in the US relating to the 2010 release by WikiLeaks of 500,000 secret files detailing aspects of military campaigns in Afghanistan and Iraq.

Evidence in the trial stage of his long-running battle against extradition entered its fourth week Monday and is due to end within days.

But the judge hearing the case has said it will be at least six weeks before she delivers a verdict — meaning it will come after the US presidential election on November 3.

It is the latest in a series of legal battles faced by Assange since the leaks a decade ago.

In 2010, he faced allegations of sexual assault and rape in Sweden, which he denied.

He was in Britain at the time but dodged an attempt to extradite him to Sweden by claiming political asylum in Ecuador’s embassy in London.

In November 2019, Swedish prosecutors dropped their investigation over the rape allegation, after failing for years to interrogate Assange in person while he was holed up in the embassy.

Assange lived in a small apartment there for seven years, but was turned over to British police in April 2019 after a change of government in Quito.

Ai, 62, said he had met Assange several times during this period and, although he did not know him well, felt he was being unfairly targeted.

“Each step is more and more difficult for him. It’s unbelievable. He is prepared to fight but alas it’s not fair conditions, this is not fair to him.

“They tried to smash him and his name,” he added.

Ai said he chose to stage a silent protest because “all the words we want to say are already there”.

“As an artist, if I cannot use my art — which is very limited — then I rather just be silent.”

Ai, a long-time critic of the government in Beijing, is China’s best known modern artist.

He helped design the Bird’s Nest Olympic stadium, but was detained for 81 days in 2011 as part of a crackdown on dissent.

His passport was confiscated and only returned to him in 2015, after which he moved to Berlin.