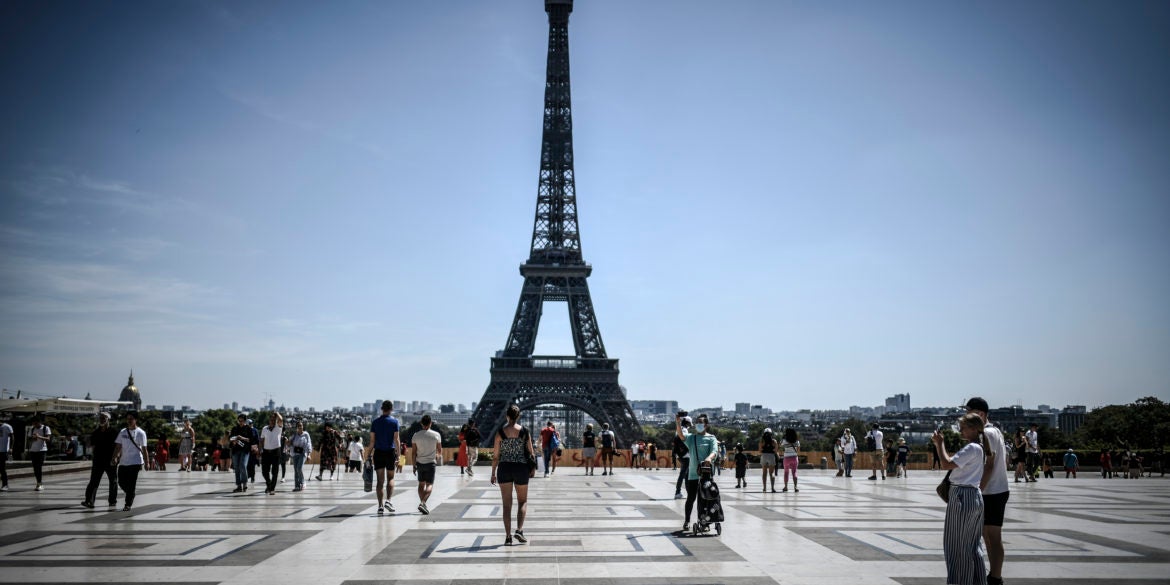 (FILES) In this file photo taken on August 6, 2020 tourists visit the Esplanade des Droits de l'Homme with the Eiffel tower in the background, in Paris. - The Eiffel Tower was evacuated for two hours after a false bomb threat, on September 23, 2020. (Photo by STEPHANE DE SAKUTIN / AFP)

Like Milan — which finished Sunday — the vast majority of Paris shows over the next nine days will be virtual, with frustrated fashionistas watching on their phones and computers through TikTok, Instagram, YouTube, and the labels’ own sites.

“Fashion has to be more fair, diverse and equal,” she said.

Only a handful the biggest brands, led by Dior, Hermes, Louis Vuitton, and Chanel, are staging real live shows.

With the vast bulk of international buyers and style journalists who usually flood the French capital staying away because of travel restrictions, Saint Laurent, Hedi Slimane’s Celine and Virgil Abloh’s luxury street brand Off-White have bowed out altogether.

The lack of pomp of spectacle has led to no end of streaked mascara online from influencers mourning the loss of yet another proper fashion week to Covid-19.

People crave the “theatre of the live spectacle”, he added, saying the digital men’s and haute couture shows in June were something of an anti-climax.

Before the week had even officially started, John Galliano released images of his new Margiela collection, even though he is not supposed to show until next Tuesday.

And rising French designer Marine Serre warned that “Amor Fati”, the film that will showcase her spring summer looks, “contains strong images that some viewers may be sensitive to.”

“This collection is a mirror of the last five months,” Serre told AFP.

With the Belgian master Dries Van Noten, she has called for a major rethink of how the industry works.

Their manifesto for responsible fashion has since been signed by hundreds of other designers.

“The world around us has changed radically,” Serre added.

Fashion’s enfant terrible of the moment, Demna Gvasalia of Balenciaga, said he also found himself asking if “fashion makes sense in the apocalyptic world in which we have been living since March”, when lockdowns began in Europe.

However, the Georgian designer told the industry bible Women’s Wear Daily that he has since “discovered that even in times of pandemic, people want something new. They even want it more to distract themselves from the horrors,” he added.

Even so, Salliard questioned whether it was worth persisting with shows while the pandemic continued.

“If there are no American and Asian buyers, and no journalists, what’s it for?” he asked.

His slightly surreal film was shot on the streets of his native Tbilisi, with his models buying potatoes in its street markets.

Danish designer Cecilie Bahnsen, who “adores the idea that you can wear a ball gown with a pair of trainers”, also made her first bow with a film showcasing her long white, black and pastel dresses on a blasted Nordic heath and beach.