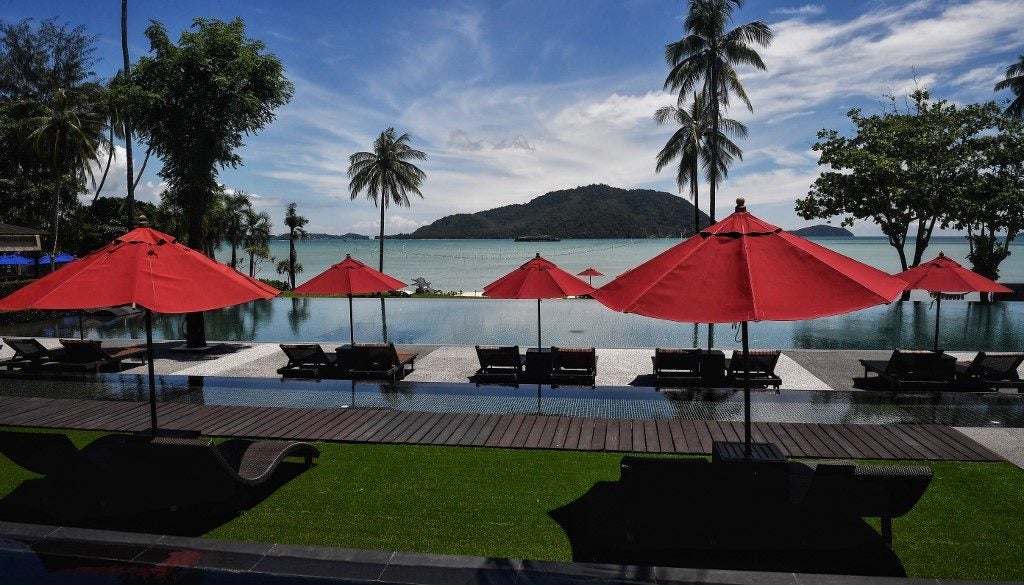 This photo taken on September 30, 2020 shows an empty pool at the luxury Vijitt Resort in Phuket. - A private infinity pool, gourmet meals... and round-the-clock surveillance from a "war room" -- the first foreigners to arrive in Thailand will be ensconced in luxury conditions under some of the strictest quarantine rules in the world. (Photo by Lillian SUWANRUMPHA / AFP) / To go with 'THAILAND-HEALTH-VIRUS-TOURISM' by Thanaporn PROMYAMYAI and Sophie DEVILLER

PHUKET, Thailand — A private infinity pool, gourmet meals — and two temperature checks a day. Welcome to five-star quarantine in Thailand, where well-heeled tourists can live in luxury while obeying some of the world’s strictest anti-coronavirus measures.

After barring visitors for six months, the tourism-reliant country is reopening to a small number of holidaymakers, with the first batch arriving in Phuket, a popular resort island, in the coming weeks.

But before enjoying the beaches, the 300 tourists from China and Scandinavia will have to complete 14 days of compulsory quarantine, including two coronavirus tests, overseen by a “war room” of doctors and security guards.

“It will be comfortable but I am afraid I might be anxious because of the confinement,” said Jean-François, a French retiree living in Sweden who hopes to escape the winter in the kingdom.

“I do wonder if Thailand is doing a bit too much,” he said.

At The Senses Resort overlooking Phuket’s Patong Bay, 16 villas have been specially prepared for quarantine guests.

The villas, which are up to 220 square meters were redesigned, getting rid of cushioned surfaces to make disinfecting easier, while CCTV security cameras have been installed at the entrances.

Employees have also received training at a hospital in how to spot infections, and given personal protective equipment to deliver room-service meals.

“We won’t make much profit from these special clients because of the expenses involved,” says hotel owner Suppachoke Laongphet.

But “we had to find other sources of income to support our staff and the local economy”.

His resort is one of nine properties in Phuket — mostly luxury hotels — with government approval for quarantining guests.

Upmarket quarantine does not come cheap: confinement at The Senses runs to a hefty $5,300, or $18,700 for a family of four. If the Phuket model proves successful, the government will attempt to replicate it in the rest of the country.

Once visitors finish quarantine, they can stay and travel freely for three to nine months on a special visa created to revive tourism.

Expectations for a record 40 million visitors this year were dashed after the coronavirus put global travel on hold, sending Thailand’s economy into free-fall.

Border closures in April meant an immediate freeze to the incomes of millions of Thais working in the sector — with knock-on effects on the service and restaurant industries.

Before the pandemic, tourism generated 93 percent of Phuket’s income. Today, nearly all hotels and more than 70 percent of the island’s businesses are shuttered, officials say.

But Thailand has emerged relatively unscathed from the virus with just 59 deaths, and authorities are hoping travellers can be lured back despite having to abide by strict — and costly — quarantine measures.

The number of visitors under the new visa scheme will likely be limited — “just those with the means and who wish to stay several months in our country”, says Kongsak Khoopongsakorn, president of the Thai Hotel Association’s southern chapter.

But a tourism revival — however small — is sorely needed, he says.

“This is not what will sustainably improve the economy of the country but it allows us to be patient.”

At The Senses resort, visitors will wake up to a view of the island’s lush sloping mountains and can swim laps in each villa’s infinity pool.

But attempting to leave the room could bring police at a guest’s door within 15 minutes, said Thanchanok Pramkull, the hotel’s deputy commercial director, while an infected guest can be taken to hospital within half-an-hour.

But the strict rules have not deterred interest. About 20 people from India and Europe have already contacted the hotel since it got approval for the programme.

“It is effectively a gilded cage,” says a 50-year-old Danish visitor planning a stay at The Senses, who declined to be named.

“But it’s worth it. After the quarantine we will be able to enjoy beautiful sunsets in one of the safest places in the world for Covid.”