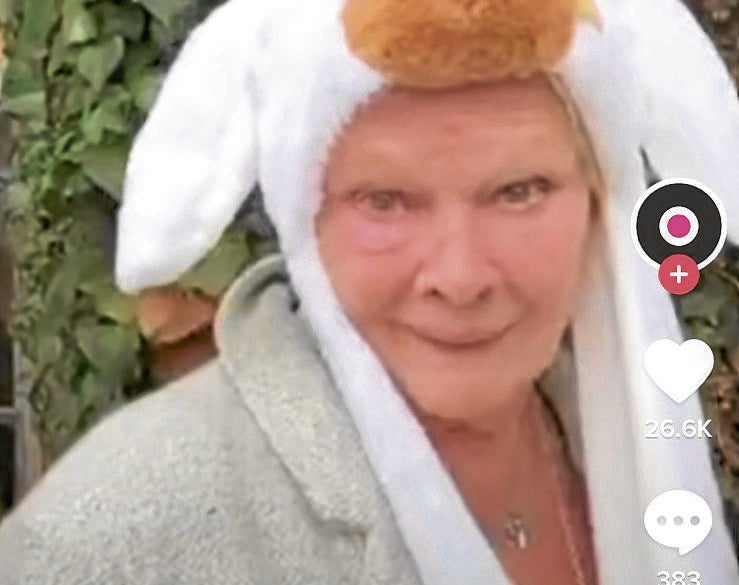 Veteran British actress Dame Judi Dench is a regular on her grandson’s TikTok.

‘You have to go with the flow, try new things, and most importantly, have fun’

When the video-sharing app TikTok launched worldwide two years ago, it was quickly appropriated by teenagers and those in their early 20s, who took to the social networking platform like fish to water. In videos lasting from 15 seconds to a minute, they cracked jokes, lip-synced and danced for all the world to see.

The more popular ones amassed multiple views and thousands of followers who were vocal in expressing their delight or dismay. One thing was certain: You needed a thick skin to thrive in an environment that rapidly builds people up, but can just as easily tear them down.

The pandemic and the resulting lockdown led more people to download the app for different reasons. Some wanted a reason to laugh, while others hoped it would bring them closer to friends and relatives with whom they had lost touch. That TikTok was supposedly “just for kids” didn’t matter to these full-grown adults.

“I wanted to continue being relevant,” said Dr. Vicki Belo, founder and CEO of Belo Medical Group, when asked why she put up her own account (@vicki_belo).

“In this digital day and age, there’s always something new that comes out. If you don’t adapt and adjust, you’ll be left out, maybe forgotten. So you have to go with the flow, try new things, and most importantly, have fun!” she told Lifestyle in an email interview.

Her videos show her answering skin-related questions with a simple yes or no, dancing solo to Lady Gaga’s “Rain on Me,” and “twinning” (wearing matching outfits) with her daughter Scarlet Snow.

In the first week that veteran actress Gina Pareño (@yourlolagets) joined TikTok in May, she garnered a million views, and now has amassed close to a million followers. The septuagenarian addresses her viewers as “mahal” (love) and talks to them like friends.

It’s her self-deprecation, however, that endears her to fans. When one follower asked if she had a boyfriend or lover, Pareño gave a throaty laugh before saying, “Pack up na ako sa mga boyfriend-boyfriend. Sakit ulo ko ’day!” (I’m done with boyfriends. Such a headache!)

Pareño, who goes by Lola Gets, does the whole Tiktok gamut: She dances, uses filters for her videos and recently went online with streaks of bronzer splashed across her cheeks. This is one woman who isn’t afraid to poke fun at herself. As she announced in her TikTok debut in May: “I’m ready to dance, sing, act and most of all… go crazy!”

Perhaps that’s the mindset one should have while navigating this relatively new world. Belo admits she is not immune to criticism, although comments on her videos are mostly positive.

“I just shrug off nasty comments and concentrate on the positive. People will always find something unkind to say no matter what you do, so just do what makes you happy.

“For me, I’m just having fun. I don’t take these things too seriously. I know I’m not a great dancer. I tried to rap and it was spontaneous, no practice—it’s just kalokohan,” she said.

It’s also her way to surprise people and bond with her daughter by experimenting with the different special effects.

“I find TikTok fascinating to watch. I also wanted to see how people would react if I was in it, and I was pleasantly surprised with the reactions. I think TikTok is so popular these days because people have become bored with long clips. They prefer snippets from which they can learn a lot,” Belo said.

Even Hollywood’s most venerable stars have been drawn to the allure of the small screen. Veteran actress Dame Judi Dench is a regular on the TikTok account of her grandson, Sam Williams (@sam.williams1).

Through the wonders of technology, the two interact mainly through video calls. Williams poses riddles that his octogenarian grandmother always ends up solving. “Why did the lobster blush?” he asks in one post. “Because the sea weed,” she quips.

More than the chance to engage with her grandson, however, Dench credits TikTok for saving her life at a time when “every day is so uncharted.” In an interview with the United Kingdom’s Channel 4 News, she said, “You wake up and you wonder what day it is, and sometimes what month. And then you think, ‘What do I do today?’”

In one of her rare solo appearances on the app in May, Dench wears a furry novelty dog hat and gives some brief but sparkling advice: “Just keep laughing. That’s all we can do.”