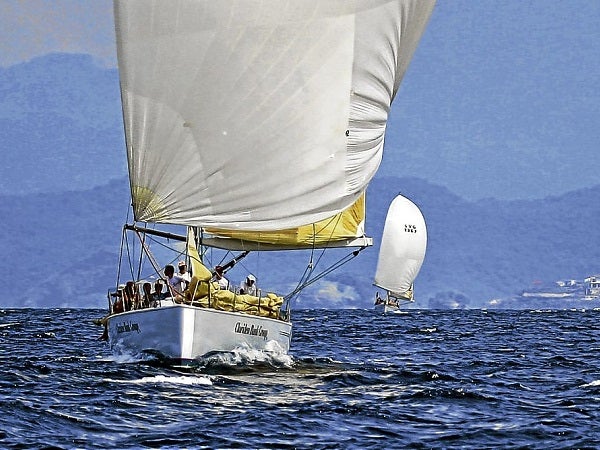 The last quarter of the year marks the end of the sailing season in the Philippines, and time for the last regatta of the year.

For those not too familiar, a regatta is a series of races of boats, normally sailing vessels, though there have been races for engine-powered vessels.

Each vessel is tasked to navigate a certain course, following specific waypoints, using only the power of the wind and the skill of  sailors to reach the finish line.

While 2010 proved to be the biggest, on record, in terms of the number of vessels participating, 2011 was not bad, with over 20 vessels of different sizes heading to the Marina at the Peninsula de Punta Fuego for the 10th rendition of the Punta Fuego Regatta. A great number of sailing fans and onlookers also showed up, lining the coastline with their long lens cameras and binoculars to catch a glimpse of their favorites.

Just like almost every year, wind was the major consideration for everybody, especially race organizer Jerry Rollin, who was seen early in the morning driving around the peninsula to determine the best location to start the race.

Given that a large majority of the dinghy class boats, like the Optimist, were competing in the SEA Games, only hobie catamarans and keelboats competed in this year’s races.

The race started a little late, with the hobies leaving Club Punta Fuego’s Lower Beach Club, while the keelboats took off from the Marina. Chasing the racers around Fortune Island on a fast boat, I could clearly see through my 200mm Canon lens the crews hustling around the deck of the keelboats, working as a team, hoisting their spinnakers as they headed toward the waypoint at Terazas de Punta Fuego.

The wind proved strong and true throughout most of the race, giving participants a fun and challenging day out at sea, and race organizers a positive outlook on what  conditions may be the next day.

Former executive chef now general manager Mikel Arriet led the staff preparing a buffet for participants and guests. Highlights of the buffet, for me, were the Brazilian steak medallions cooked to perfection, and the ceviche-like appetizers served in small shot glasses.

Of course, a visit to Club Punta Fuego would not be complete without trying its Black Ink Shrimp Tempura, an amazing twist given the Japanese classic using black squid ink. It comes with a special herbed mayo dip that provides a nice coating to the rough texture of the tempura. You definitely cannot eat just one.

The meal was a prelude again to the famous mid-race party overlooking Club Punta Fuego’s infinity pool and Sunset Cove. Amid the sounds of a live band, participants exchanged stories and experiences of the day, and proved that that they did not only race hard—they partied even harder.

Early Sunday morning, the wind was a major concern at the start of the last leg of the race, as the race organizer feared a repeat of the previous year. While the first day of races went off despite a little delay, the second day unfortunately would not get off at all as no wind was in sight throughout the peninsula; the race was called off at 1 p.m. on the second day.

The results of the previous two races held the day before were eventually computed and used to determine the winners for this year’s event.

In the Cruising Class, first place went to Rapparee, captained by David McKenna, followed by the Selma Star of Jun Avecilla, while third honors went to the Irresistible and Harry Taylor.

In the Hobie 16 category, Luigi Manzi and Eric Tomacruz took first place, followed by the team of Peter Capotosto and Karla Kramer and Michael Ngu and Lindo Pahayhay

Despite the shortened race,  race organizers and participants were quite happy with the results, and are already looking forward to the next race.