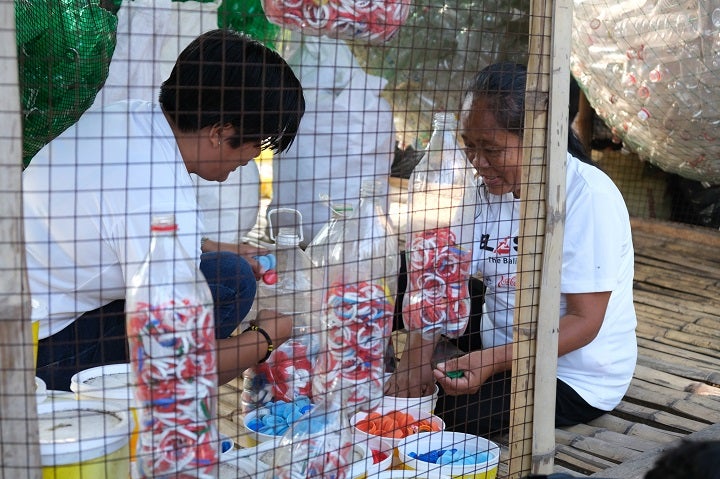 Plastic—lightweight, strong, and easily molded into various forms—has no doubt revolutionized our everyday lives and has provided convenience in the way we consume products. But, largely due to improper waste management and disposal, plastic has unfortunately given rise to a global waste problem.

In the Philippines alone, around 2.7 million metric tons of plastic waste is generated each year, and a huge portion of this finds its way into the environment, choking waterways, polluting the ecosystem, and jeopardizing our biodiversity.

“Any time our packaging ends up anywhere it doesn’t belong is simply unacceptable to us,” said Jonah De Lumen-Pernia, Public Affairs and Sustainability Director of Coca-Cola Philippines. “Coca-Cola has globally committed to building a World Without Waste, and we are striving to make that a reality in the Philippines through various initiatives and partnerships.”

Taking part in immediate, bold actions and sustainable solutions, Coca-Cola has been steadily contributing to collective action as it leverages on its expansive scale. In January 2018, the Company announced its World Without Waste global vision: an ambitious goal to collect and recycle every single bottle and can it sells by 2030. Ever since Coca-Cola was first served 134 years ago, the Company has always strived to ensure that sustainable packaging innovation is ingrained in the way they do business.  All of Coca-Cola’s primary packaging in the Philippines, for example—from returnable glass, to PET plastic bottles, and aluminum cans—are all 100% recyclable. In fact, the iconic Coca-Cola glass bottle still represents approximately 50% of the Company’s total business in the country, with many found in sari-sari stores in far-flung areas. These glass bottles are continuously collected, washed, and reused in a virtuous supply chain cycle.

The Company has also implemented light weighting of its PET plastic packaging, which has resulted in a huge reduction in its plastic consumption while ensuring the same top quality of its beverages. As a result, packaging for single serve (500ml and 330ml) Wilkins and Viva are now approximately 20% lighter.

With the goal of using 50% recycled material in its packaging, the Company introduced the country’s first beverage bottle made from 100% recycled plastic, the Viva! eco-bottle. Launched in June 2019, Viva! mineralized water is the first brand within Coca-Cola’s portfolio to transition toward this packaging redesign. Further to this, in September 2019, the Company transitioned its green Sprite packaging to clear PET and also offered the lemon-lime carbonated drink in bottles made from 100% recycled plastic. This is aligned with the roadmap to increase the recyclability of its packaging—as clear bottles have the highest recyclability rate compared to others.

“PETValue Philippines represents Coca-Cola’s first investment in a recycling facility in Southeast Asia. It demonstrates the Company’s genuine commitment to our World Without Waste vision—it is not just talk, we really want to establish a circular economy for our recyclable PET plastic packaging,” says Gareth McGeown, CEO and President of CCBPI.

Located in General Trias, Cavite and set to be operational by Q1 of 2021, PETValue will employ the safest and most advanced technologies to process used PET plastic bottles—thereby allowing an endless loop of recycling. Its projected capacity, or the amount of used plastic bottles it can process, is 30,000 metric tons of PET bottles per year, or equivalent to approximately 3 billion bottles.

McGeown adds, “Through this investment, more jobs will be created for Filipinos—and this will also help uplift the livelihood of those within the waste value chain.”

Partnerships toward impact and scale

Recognizing that it cannot do the work alone, Coca-Cola has been working hand-in-hand with like-minded organizations to make its vision a reality. Through the Coca-Cola Foundation Philippines, the Company has partnered with the Alternative Indigenous Development Foundation (AIDFI) for the Balik Plastic Project or Blastik Project. Rolled out in a farming community in Negros Occidental, the project seeks to educate communities on the importance of recycling and up-cycling, as well as the economic viability of PET bottles and setting up of a plastic waste management system.

Through the project, residents of the community called PeacePond are able to sell their plastic PET bottles to volunteer Blastik Project “eco-rangers” aboard low carbon e-bikes. Afterward, the bottles are taken to a materials recovery facility where they are weighed, washed, dried, and stored and where caps and labels are segregated. Recycling technologies from AIDFI, including shredders and compression ovens, transform the packaging into new products—plastic flakes become pavers or tiles, bottle caps are melted to make plastic chairs, while labels are handcrafted into wallets, and many more.

Coca-Cola Philippines also recently entered into a partnership with Plastic Bank®, a social enterprise that is helping the world stop ocean plastic while improving the lives of collector communities. Through this partnership, Plastic Bank collectors will gather 100,000 kilograms of ocean-bound plastic over the next year. Coca-Cola aims for this plastic to be delivered to PETValue Philippines in the future.

Plastic Bank® collectors receive a premium for the materials they collect, a source of income which helps them cover basic family necessities such as groceries and cooking fuel. Health insurance, digital payment solutions, and school tuition will also be made available in the near future.

Meanwhile, CCBPI also partnered with Junior Chamber International (JCI) Manila and the City Government of Manila to support the city’s waste management efforts and raise awareness on plastic recycling. Through this partnership, collection bins will be deployed to various barangays in the city.

At present, Coca-Cola has piloted over 30 solid waste management projects in 16 provinces across the country to help stop plastic waste from ending up in oceans and landfills.