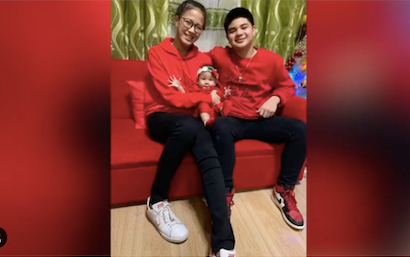 Bugoy Cariño with EJ Laure and their baby. Image: Instagram/@ennajielaure

Bugoy Cariño slowly learning how to be a dad at 18

Teen actor Bugoy Cariño is already a dad at 18 years old and it has definitely changed his life enormously.

Being a young dad to his daughter has made Cariño more mature, and this he talked about during his guesting in the second season of the digital show “I Feel U” last week, Oct. 17.

So, how does it feel to be a dad at 18? Cariño said he initially had a hard time adjusting to his new real-life role.

But after a while, the young actor got the hang of it, with support from his family.

(As the days passed, of course I eventually learned how. With help from my mother, my family who guides me. I learned how and it eventually became easier.)

The biggest lesson Cariño learned from being a young dad is how to save money. He soon realized that he had to sacrifice luxury for the sake of his child. He also recalled how happy he was to see his baby for the first time, via Viber.

Cariño only saw his baby in pictures which were sent to him through the messaging app by the mom of his girlfriend.

(When it saw it from Viber, I had to sit down and I cried and cried. I do not know what I felt then. It was like my heart softened. It seemed so fast.)

Ultimately, he knows now that the welfare of his child is his top priority, and he hopes to give the child a good life. He also dreams of building their own home.

The former Hashtags member’s relationship with the child’s mother, volleyball player EJ Laure, has sparked widespread controversy due to Cariño being only a minor at 15 years old when he first got involved with Laure, who was then 19 years old. JB