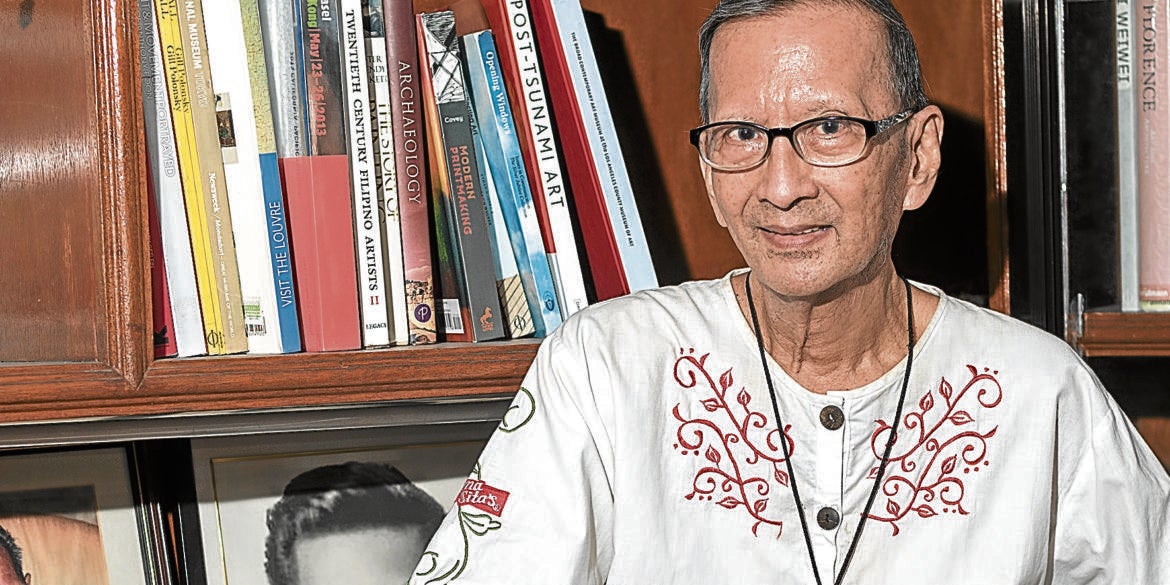 In ‘SYM, Galicano and PASPI,’ the devoted chronicler of Philippine art trains his skills on titans of representational art

“I’m not a critic, I’m a feature writer,” wrote author and Inquirer contributor Amadís Ma. Guerrero in “Philippine Social Realists,” his first book for Erehwon Center for the Arts, which was published in 2019. “My approach is reportorial rather than critical.”

In his introduction to that work, the critic Cid Reyes wrote: “A veteran interviewer and chronicler of cultural events, Guerrero applies his almost surgical skills in exacting information and insights from his subjects, who to their credit, remain as unflinching as ever in their pursuit of the truth of the conditions of their country. Guerrero traces their individual life stories from childhood to their artistic awakening, leading to their nationalist fervor, and in so doing, has unearthed a wealth of heretofore unknown material that would surely be lost with the passage of time and life.”

Guerrero continues his project of chronicling some of the less-traveled byways of the Philippine art scene in “SYM, Galicano and PASPI,” his second book for Erehwon (and his 18th, overall), which will soon be available to the reading public.

This time around, Guerrero turns his reportorial lens on a genre that has been largely overshadowed in the Philippine contemporary art scene’s headlong rush toward post postmodernism and its myriad mutant genres: representational art.

“SYM, Galicano and PASPI” tells the story of the Filipino artists who, while taking note of the achievements of the moderns, chose to go against the tide, so to speak, and return to the neoclassical tradition of art exemplified by the likes of Fernando Amorsolo, Fabian de la Rosa and Martino Abellana.

Guerrero focuses on the artistic careers of Sofronio Y. Mendoza (a.k.a. SYM), Romulo Galicano and the artists who make up Portrait Artists Society of the Philippines Inc. (PASPI).

Through his usual modus operandi of extensive and intensive interviewing, Guerrero manages over 18 chapters—each focusing on an individual artist—to outline what amounts to a stubborn countertendency in Philippine art to resist the blandishments of the latest, the most critically acclaimed and need we say it—the most bankable, and to stick to what amounts to a retrograde, neoconservative view of art that harks back to the immediate postwar era. It is interesting to note that most (though not all) of the artists surveyed share Cebuano origins, and it is in that southern city that this movement seems to have put down the deepest roots.

Its first flowering, however, took place in Manila in the late 1960s with the founding of the so-called Dimasalang Group, of which both SYM and Galicano were prominent members along with Ibarra dela Rosa, Andres Cristobal Cruz and E. Aguilar “Abe” Cruz.

In a 1987 essay, historian and art connoisseur Ambeth Ocampo wrote: “The artistic climate in 1968 at the time SYM founded the Dimasalang group was revivalist in the sense that a few decades earlier the ‘Moderns’ Victorio Edades, Hernando Ocampo and others had gone against the blind adoration which reduced the genre of Fernando Amorsolo into Mabini Art. The rich were buying nonrepresentational art because it was ‘in’ to do so thus the representative artists were called old-fashioned and left without patrons. Many had to hawk kitsch to tourists on Mabini Street, Ermita, thus the name Mabini Art. It was artistic suicide to be a ‘conservative’ (meaning representational) painter at this time but SYM felt that he was part of a great tradition which had not yet reached the peak of its evolution. He looked up to old Philippine masters: Juan Luna, Felix Resurreccion Hidalgo, Fabian de la Rosa, Fernando Amorsolo and, of course, his mentor Martino Abellana (sometimes referred to as the Amorsolo of Cebu) who made him realize that he was still part of that development of Philippine painting which had not yet achieved full flowering.

“The Dimasalang group thus following the tradition of Amorsolo and De la Rosa produced a large body of landscape paintings, which was the logical result of all the ‘picnics’ to Mt. Arayat, Laguna, Bulacan or any place where the mood took them. To be more close to their times, the Dimasalang Group moved from rustic landscapes to cityscapes, often painting from the rooftops of high-rise buildings thus adding a new genre to Philippine art.”

Ocampo continues: “It is too bad that there is more to SYM than will fit in this Catalog, maybe a book on SYM and his movement will be written in the future because the importance of SYM and the Dimasalang Group is that through their work they were able to counter the wave of abstract art and yet coexist with the other artists. SYM made representative art, denigrated by the critics as almost photographic or old-fashioned, reputable again. SYM produced a quiet revolt, a renaissance if you want to call it that, in the Philippines, painting with his sunlight canvases and engaging interiors.”

Guerrero takes up the succeeding chapters of that story in “SYM, Galicano and PASPI.”

Significantly, Guerrero chose to bookend the work with the chapters on the two Dimasalang group members: Romulo Galicano and Sofronio Y. Mendoza.It is the former’s approach that comes closest to describing an overall philosophy that binds this group (one hesitates to call it a school) together.

In 2010, Galicano founded PASPI in Cebu. A Manila chapter was organized in 2019. Together they form a vehicle for nurturing the kind of figurative painting that would otherwise be lost in the shuffle of the hectic contemporary art scene.

“In PASPI, both Manila and Cebu, the members are given a background on the history of art,” writes Guerrero. “Who is Degas, Monet and Delacroix? What is impressionism? Lectures and demos of figure drawing, landscapes and still life are conducted. Group exhibits are eventually organized.”

The author quotes Galicano: “Each artist has his or her direction and this direction can be aided through art history. PASPI is for training, not pasikat (showing off). One day they can go abstract when they are mature enough. That is what is nice about art, the scope is very wide, we show all the basics, develop their potential. We criticize, not to degrade the work but to help them improve, to uplift. That is our mission, we who are experienced artists, should help and guide the younger artists who are looking for such guidance.”

For his part, the artist known as SYM had initially abandoned painting in the traditional manner for neo-cubism, for which he gained his early fame.

“At the time, modern art was on a pedestal,” he recalled of his beginnings as an art student at the University of Santo Tomas (UST). “When I entered UST, I was still doing traditional art. My professors told me that wouldn’t do, I would fail. Modern art was the standard being taught all over the world. Amorsolo was over, Manansala was the new hero.”

True enough, he started winning competitions with his modern paintings.

However, when he joined the Dimasalang group, SYM went back to a more contemporary form of realism.

Since then, he has gone back and forth between the two styles, making him one of the few artists who is at home in either, and who feels no need to justify himself.

“The bottom line in art is total freedom of expression,” he said in an interview with this writer.

“As an artist, you have the license to express yourself the way you want, even if it means reviving the past. It’s all up to you. As long as what you paint is different from the rest. You have to have a signature, otherwise it’s as if you’ve remained a student all your life.”